Accessibility links
Sen. Joseph Biden (DE) Two decades after his first presidential bid, Sen. Joseph Biden is running again. The Delaware senator, now chairman of the Foreign Relations Committee, voted for the war in Iraq in 2002. But he has since become one of President Bush's harshest critics. 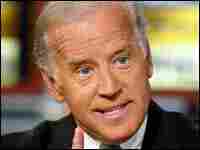 The first time Sen. Joseph Biden set his sights on the White House, he was seeking the 1988 Democratic presidential nomination. The Democrats had recently regained control of the Senate, and Biden hoped that his presidential ambitions would be helped by his chairmanship of the Judiciary Committee — where he led the opposition to the ill-fated Supreme Court nomination of Robert Bork. But Biden dropped out of the race in September 1987 amid charges that he had plagiarized parts of his speeches and embellished his academic record.

Two decades later, Biden is back in the race, and once again he is a new committee chairman: this time, the Foreign Relations Committee. Biden hopes that the public's unhappiness with the war in Iraq will buoy his chances. Though he voted to authorize the war in 2002, he has since become one of President Bush's harshest critics.

Biden has proposed a detailed plan that would divide Iraq into separate, autonomous regions of Shia, Sunni and Kurdish influence. His supporters argue that the proposal shows him to be serious about coming up with an alternative to the Bush administration's Iraq strategy.

But others say Biden's plan is unworkable and would lead to further sectarian strife. Still, he is hoping that his knowledge of foreign affairs will set him apart from other Democrats in the race. He dismisses calls from others for the withdrawal of U.S. troops from Iraq within six months.

Viewed as a "second-tier" candidate, with much less money, name recognition or organization than acknowledged front-runners Hillary Clinton, Barack Obama and John Edwards, it's easy for Biden to be upstaged. For example, when Clinton came out with a proposal to "deauthorize" the war, in effect reversing the votes to authorize the war that she and Biden cast in 2002, it got a huge amount of coverage. But Biden had made a similar proposal months earlier, with little media attention.

A regular on the Sunday TV talk-show circuit, Biden has a common-sense speaking style that cuts to the chase. But he also has a tendency to be long-winded, and a verbal gaffe handicapped his campaign right out of the gate. Even as Biden officially announced his candidacy, he found himself apologizing for describing fellow Democratic presidential hopeful Sen. Barack Obama, who is black, as "articulate" and "clean." Some interpreted the remark as racist, though Biden insists it was meant as a compliment, a reference to the expression "clean as a whistle, sharp as a tack."

Biden was a long-shot candidate for the Senate in 1972, when he upset veteran GOP incumbent J. Caleb Boggs by just 3,100 votes. He has breezed by Republican opposition ever since.