Accessibility links
Peyton's Plays Drive Dramatic Colts Offense Indianapolis Colts quarterback Peyton Manning offers a sort of street theater at the line of scrimmage, testing the limits of the play clock and gesturing wildly. What in the world is he up to?

Indianapolis Colts quarterback Peyton Manning offers a sort of street theater at the line of scrimmage, testing the limits of the play clock and gesturing wildly. What in the world is he up to? 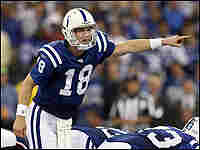 Peyton Manning will try to point the Colts to victory over the Chicago Bears on Super Bowl Sunday. Doug Banc/Getty Images hide caption 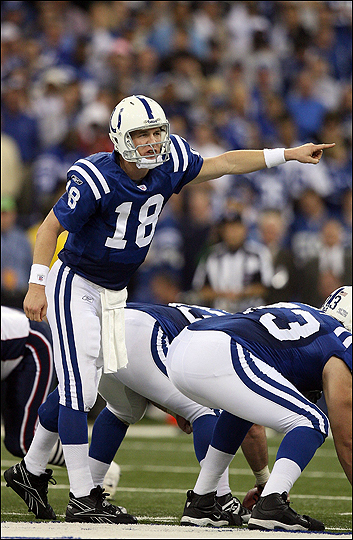 Peyton Manning will try to point the Colts to victory over the Chicago Bears on Super Bowl Sunday.

It's finally almost here - Super Bowl XLI, between the Indianapolis Colts and Chicago Bears. The National Football League says Sunday's game in Miami will be televised live in 232 countries and territories, which means a lot of people around the globe will see for the first time what NFL fans have been seeing for years - a high powered Colts offensive, led by the league's most frenetic quarterback, Peyton Manning. NPR's Tom Goldman has this report on the method behind Manning's unique style.

TOM GOLDMAN: All of which means roughly, what the heck is Peyton Manning doing? I put the question in English to Colts quarterbacks coach Jim Caldwell. He explained Manning's gyrations and audibles are a response to several play options that have piped into Manning's helmet headphones.

JIM CALDWELL: And he actually makes a decision at the line of scrimmage which one he wants to run, depending upon how the defense align themselves.

GOLDMAN: Manning can go beyond the options. The entire playbook is open to him, and he uses it. Many quarterbacks read defenses and call audibles, but Caldwell says no one does it as much or with such command.

CALDWELL: He's a very, very unusual individual just in terms of his application of concepts, his ability to recall situations and looks. He has an extraordinary mind.

GOLDMAN: Remember the scene where you see all these diagrams in his head? Do you think that's what Peyton Manning (unintelligible)?

CALDWELL: You know, I'm not certain that he's dealing with any mathematical equations. But I can tell you this: He's probably got a number of different scenarios in his mind on how to attack defenses. And, you know, he does a great job of it and enjoys doing it as well.

GOLDMAN: Manning especially likes the rare freedom he gets as a quarterback from Colts offensive coordinator Tom Moore.

TOM MOORE: Every Sunday, 45 minutes before kickoff, he comes to me and says if you see something out there, you go with it and I got your back.

GOLDMAN: Tight end Dallas Clark says he's also gotten support as one of the guys who has to react to all those audibles and hand signals. When he was a rookie four years ago it was tough memorizing the endless plays and options, making mistakes on the field when he forgot. Now Clark says it's routine most of the time.

DALLAS CLARK: Every now and then I'll catch myself trying to, OK, what was that again? Because he'll pull something out from week three, you know, a signal or something. And you're just like, oh, OK, I remember.

GOLDMAN: Clark says most of Manning's gyrations are legit but some are meant to bluff the defense. The Bears know that. Chicago defenders say they're ready and that they need to be patient and poised. Bears linebacker Lance Briggs says his biggest challenge Sunday will be filling the time Manning uses to adjust, readjust, maybe even re-readjust the Colts offense.

GOLDMAN: What do you say to him?

BRIGGS: I don't know. I might call him powder puff.