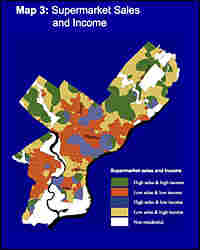 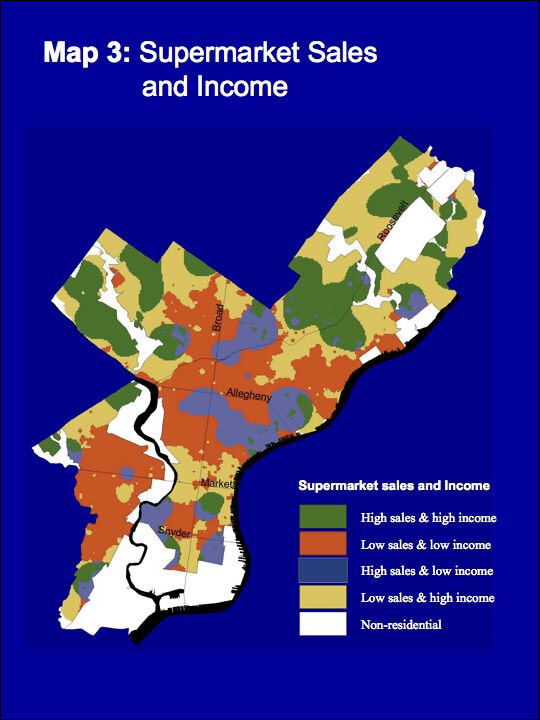 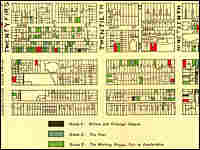 A map by W.E.B. Du Bois, a part of which is shown here, provided an inspiration for Amy Hillier's work. hide caption 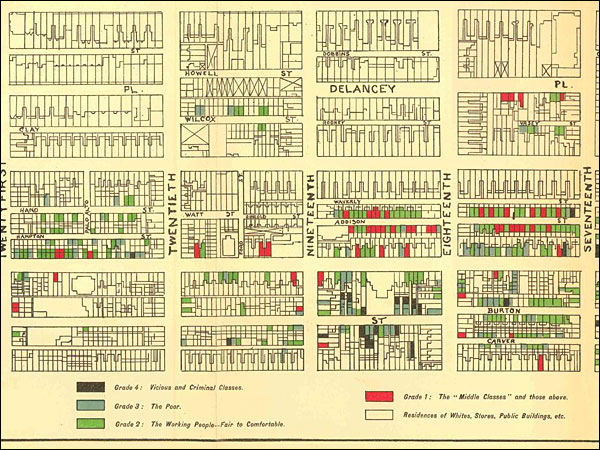 A map by W.E.B. Du Bois, a part of which is shown here, provided an inspiration for Amy Hillier's work.

A group in Philadelphia is using high-tech mapping technologies to show that people in poor neighborhoods need more places to shop for healthy food.

In the late 1890s, the civil-rights pioneer W.E.B. Du Bois created a map of houses in a narrow strip of central Philadelphia. The map showed houses where African-Americans lived, highlighted and color-coded to indicate their class. For Amy Hillier, professor at the University of Pennsylvania School of Design, Du Bois' map is a professional inspiration.

Hiller is trying to walk in the footsteps of Du Bois. Using a technique called Geographic Information Systems (GIS), Hillier draws maps of urban landscapes built from mounds of data — statistics on wealth in particular neighborhoods, traffic patterns, crime --- anything that has a location.

Hillier's maps are turning out to be very useful for neighborhood activists such as Duane Perry, who founded an organization in Philadelphia called the Food Trust, dedicated to helping city residents gain access to nutritious, affordable, food.

In many urban neighborhoods, particularly low-income ones, well-stocked grocery stores are hard to find. Perry says grocery stores abandoned these neighborhoods in recent decades in favor of suburban areas, where there was more space for big supermarkets and parking lots.

Hillier computed a map that produced a splotch of red across the face of Philadelphia — a broad swath of low-income neighborhoods that lacked places to buy good food. In many of them, people were dying in greater numbers from diet-related diseases.

Duane Perry says when he put that map in front of local leaders, the information hit home in a way he'd never seen before.

Dwight Evans, who chairs the appropriations committee of Pennsylvania state legislature, pushed through a new, $30 million fund that provides subsidies to build supermarkets in neighborhoods that most need them.

"I already knew that there was a problem," Evans says. "The map just made it real. It put a face on it. It was like an exhibit in a courtroom."

More than 20 supermarkets have since opened in Philadelphia and other Pennsylvania cities, with the aid of state funds.

Mapping the Dubois
The Food Trust