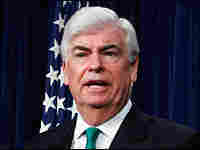 Presidential candidate Christopher Dodd, a Democrat from Connecticut, has served in the Senate since 1981. Mark Wilson/Getty Images hide caption

Sen. Christopher Dodd (D-CT) says President Bush's plan to increase troops in Iraq is a "continuation of a failed policy." Dodd announced earlier this month that he is seeking the Democratic nomination for the 2008 presidential election.

Dodd tells Robert Siegel that he made "a mistake" when he voted in favor of the Iraq war.

"I believed the information that we were getting on weapons of mass destruction. And I regret the vote. But I don't want to compound that vote by now voting for something that extends that policy," he says.

Dodd says he favors cutting war funding immediately, before more troops are sent to Iraq. He says competing nonbonding resolutions on the war make it appear as if "Congress doesn't know what it wants to do on the issue."

The presidential candidate praises the Iraq Study Group report, and says that diplomacy and politics are the only ways to resolve the situation in Iraq.

The United States' ability to have significant influence in the Middle East has been underestimated, Dodd says.

"We have a lot more allies than the Iranians do in the region at this point — certainly most of the so-called moderate Arab states, even those who are presently aligned with Iran," Dodd says.

"I think Syria is ripe for turning," he adds. "But you need to invest the time and effort to do so, and this administration refuses to do that. Diplomacy's not a favor to these people; it's how the United States exercises its influence — by engaging people, even people we disagree with on a number of issues."