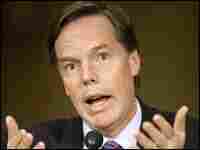 In an interview with NPR's Juan Williams earlier this week, President Bush promised a "firm" response to any Iranian military action in Iraq.

President Bush on Iran's Role in Iraq and Its Nuclear Ambitions

"We have picked up individuals who we believe are giving very sophisticated explosive technology to Shia insurgent groups, who then use that technology to target and kill American soldiers," says Nicholas Burns, undersecretary of state for political affairs. "It's a very serious situation. And the message from the United States is, Iran should cease and desist."

In an interview Wednesday, Burns spoke with Steve Inskeep about the ambiguous relations among the United States, Iran and Iraq.

Have you linked Iranian involvement to a specific incident or operation?

Well, we've been tracking this for about two years, and there's been increased evidence over that time that Iran has given this kind of assistance to the Shia insurgency groups in southern Iraq. They've attacked British soldiers near Basra, and they've now begun to mount those operations throughout the country, at least in the Baghdad region as well. And so we're very concerned about it. Now, we warned Iran, privately, on a number of occasions over the last year and a half, and the Iranians, of course, did not appear to listen to that. So now we've begun to detain those Iranian officials. And we think it's absolutely within our rights to do so under Article 51 of the U.N. Charter, which is self-defense. Iran should not seek this type of role in Iraq. It should try to become a force for unity in Iraq itself, but it's not choosing that path right now.

There's been much interest in a particular incident in recent days near the city of Karbala, where a number of insurgents in U.S. military uniforms, or what looked like them anyway, got past a number of checkpoints and were involved in a gunfight in which a number of Americans were killed. Do you believe Iran had a role in that specific incident?

That was a despicable event, and we did lose five young Americans in that attack. We don't know who was responsible. That's under investigation.

Are you looking at Iran?

You know, Steve, it's hard to say. I don't want to say anything that would be inaccurate. And, obviously, we're looking at all sources, and we'll try to find those who are responsible and hold them accountable. But right now it's not possible to say exactly who those people were. But the larger point is this: Iran is seeking a position of dominance in the Middle East. It's very clear. Iran has a regional agenda, which is very much at odds with that of the United States.

Well, the president has said, and others have said, that we don't intend to strike into Iran itself. We're concerned with our obligations and our interests within Iraq. As you know, American military forces are in Iraq under a United Nations resolution. So we have every right to be there. We're there at the invitation of the Iraqi government. The Iranian paramilitary and intelligence forces who we believe are in Iraq are not there under U.N. authorization or at the invitation of the Iraqi government. So there is a clear legal and, I would say, political and moral difference between what the United States is doing — which is to try to unify Iraq and bring the country to a greater measure of stability — and what the Iranians are doing.

Well, we have said for a number of years that all options are on the table concerning Iran. But we've also said very clearly, and we've followed this very assiduously, that we're on a diplomatic path. We believe it can be resolved by diplomatic means.

All options may be on the table with other issues, like Iran's nuclear program.

Well, that's been American policy for many, many years. In fact, that predates the Bush administration.

Mr. Burns, one other question. On this program, we heard from Professor Ali Ansari, director of the Institute of Iranian Studies at Scotland's St. Andrews University. He was talking about the consequences of this confrontation. And he said, this is a quote, "By raising the tension, and by raising the level of armed forces in the region, even if both sides are not interested in military conflict, you're increasing the likelihood that an accidental escalation is going to take place." Is there any truth in that?

I would see it differently. I don't believe that a military conflict with Iran is inevitable. I think that if we're patient and we're skillful, we can have a diplomatic solution to these problems. We are trying for that diplomatic solution. But it's not reasonable to suggest that because the United States has put carrier battle groups into the Gulf, we are being provocative. You know, we've defended Gulf security for six decades. Our carriers have been there throughout that time. So it's not us who are being provocative or raising the stakes here. We're simply trying to protect our interests in Iraq, the security of the Gulf Arab states and of the wider Middle East. And this has been the American position now through many administrations, and the Iranians need to understand they can't come barging into a situation, and express what they want and seek a position of dominance, without some kind of reaction from the moderate Arab states and from the United States. We're trying to convince the Iranians that it's in their best interest to sit down and talk with the United States. That is the basis of American policy.