Accessibility links
Got a Runny Nose? Flush It Out! A growing number of people seeking to keep runny noses and stuffy heads at bay are turning to saline irrigation. In essence, you're flushing your nasal passages out with a saline solution. Research suggests it works.

Listen
Got a Runny Nose? Flush It Out! 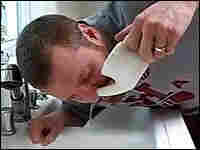 Get a demonstration of a nasal irrigation using a neti-pot.
YouTube.com

No one likes to have a runny nose or a stuffed-up head. But for performers like aspiring opera singer Kyle Malone, congestion is a real show stopper.

"If you're stuck on the day of the performance and you have a cold," says Malone, "it's a dangerous thing." After all, his voice is his instrument.

In order to keep his head free of congestion, Malone has adopted a technique that singers use called nasal irrigation. Some people refer to it as nasal lavage or neti-potting.

One of Malone's former roommates, also a singer, taught him the technique several years ago.

"I came home one day and saw him doing it," Malone says. "And I was like, 'What in the world are you doing?' Because it's a very strange procedure. You're hunched over the sink and pouring saline into your nostril."

It Feels Like You Ate A Lot of Wasabi

After trying it himself, Malone says he was hooked. He's now a graduate student in the opera program at the Peabody Institute in Baltimore. He keeps a busy schedule of rehearsals and performances, but each day he takes just a few minutes for nasal irrigation.

He begins by filling a small, bulb-shaped container with water. Then, he stirs in a store-bought package of SinuCleanse, which comes with its own container and a powder mixture of salts.

"I'll actually push the water in my nose," Malone says. The volume and force of the water flushes out the gunk that can irritate the nasal and sinus passages.

"You can feel your sinuses getting filled up," he says. But within a few seconds, the water starts to trickle out the opposite nostril.

Malone says the process is simple, easy and doesn't burn at all. He says what he does feel — almost immediately — is the sense that he's breathing freer.

"It's just a good feeling, like you had a lot of wasabi," he says. "You feel your sinus instantly cleared up."

Saline irrigation has gone mainstream in recent years. And there's research to suggest it works. In one small, study at the University of Wisconsin, Dr. David Rabago recruited two groups of sinus sufferers. Half were trained to use nasal irrigation daily. The others didn't use it all.

On average, their symptoms of congestion and head pain improved about 30-40 percent. Researchers don't know if nasal irrigation actually removes the allergens or germs that cause infection. But the studies do suggest that when people rinse their passages regularly, they seem to be less prone to sinus infections.

If you're thinking about trying nasal irrigation, experts say it's important not to confuse it with the saline sprays or mists which are also available in the drugstore. Dr. Suzette Mikula, an ear, nose and throat specialist at Georgetown University, says those saline sprays are good for moisturizing.

"So if you have dryness in the wintertime, which we often do, nasal saline mist spray will be very effective," she says.

Jessica Tomback of Washington, D.C., says everyone in her family — including the kids — has a bottle of saline spray.

"We use it multiple times a day," Tomback says. "And when I use it when I have a stuffy nose, I feel like it gets a lot out."

But the difference between saline sprays and irrigation is that a spray is the equivalent of putting a foggy mist in your nose. It may loosen things up, but it won't force them out. Irrigation is like flushing a river of water through your nose and sinuses. For opera singer Kyle Malone, this seems to make him less vulnerable to congestion and more resonant as a singer.