Accessibility links
Billiards Star Reyes Gets Everyone into the Pool The man many consider to be the best pool player in the world, Efren "Bata" Reyes, is a skinny, almost toothless, 52-year-old Filipino with a slight paunch, an infectious grin and a legion of fans both at home and abroad.

Listen
Billiards Star Reyes Gets Everyone into the Pool

The man many consider to be the best pool player in the world, Efren "Bata" Reyes, is a skinny, almost toothless, 52-year-old Filipino with a slight paunch, an infectious grin and a legion of fans both at home and abroad. 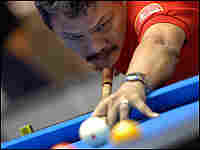 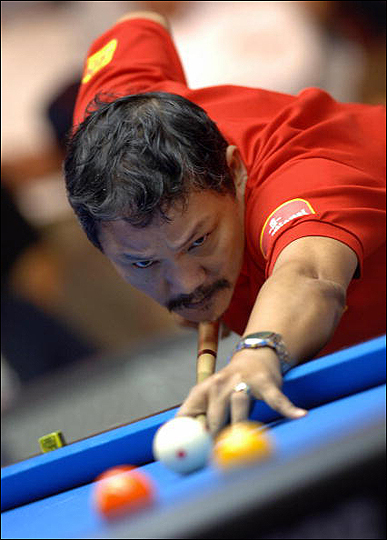 Efren Reyes at the World Pool Championship in Manila, November 2006.

Unidentified Man #2: One of the world's best.

MICHAEL SULLIVAN: A few days before the tournament started though, Reyes was about as far away from a pool hall as he could be - in a museum shooting a beer commercial. A skinny 52-year-old with a slight paunch and a wispy moustache looking a little uncomfortable at his dressing table next to a bevy of Filipina soap and film stars waiting for the shoot to begin.

EFREN REYES: The shooting is kind of we finished like about 8:00 after the...

SULLIVAN: He made it to the pool hall about 12 hours later, looking a whole lot happier than he did at the museum; intent but at ease and at home. And in a very real sense, he was home because Efren Reyes grew up in a pool hall, literally, making his bed in his uncle's pool hall in Metro Manila.

REYES: After the pool hall is closed, and then I sleep on the top of the table. And then in the morning, I wake up if I want to sleep more, then I sleep under the table, yeah.

SULLIVAN: Reyes started playing pool when he was eight. He could barely see over the table, he says, so he got a couple of empty Coke cases and stood on those to practice. And it didn't take long for him to decide to make a career of it.

REYES: I saw a lot of pool player, and if they win, they making money. That's why I have to learn too because I want to make money too. I practice by myself like six in the morning until nine in the morning. And then after closing time, I start again practicing before I sleep.

RODNEY MORRIS: In Texas, they had all the, you know, Spanish guys, so he just blended in and he just never said a word. You know, he pretended, and he let other people do the talking for him and nobody ever knew he spoke a word of English. And he just beat everybody. They're like, who's this Mexican guy beating everybody? So he was just going around the country and robbing everybody.

SULLIVAN: Reyes was dominant in the late '80s and '90s, winning dozens of tournaments in the U.S. where people were still getting their heads around the idea of a foreigner - from the Philippines, no less - beating them in what was considered an American game. And it was in the U.S. that Reyes was dubbed the Magician, an acknowledgment of his unparalleled shot-making skills.

RALF SOUQUET: He's a genius when it comes to this. He knows shots and he plays shots that nobody else does.

SOUQUET: He can see shots in his mind and his brain, three or four shots ahead. I mean, we all try to do it, but he sees different shots. He sees different patterns and different paths than we do. And he's by far the best cue ball control; the cue ball seems to be his.

SULLIVAN: Souquet says it's no accident that Reyes also enjoys and excels at playing chess. The American player Rodney "The Rocket" Morris says Reyes has helped change the way pool is played.

MORRIS: He's just got so much more knowledge than everybody. A lot of the stuff you see players do know is a lot of stuff they've seen him do. People do amazing things all the time, but he seems to always do it at the magical moment when you really need it, you know, in the last game of the final match. You know, it's the timing of everything is what makes it magic.

SULLIVAN: Filipinos take their pool seriously, and for many Efren Reyes is a god. A poor boy who's made it big with a big heart, not a big head and the man many came to see at the year-ending tournament in Manila.

SULLIVAN: Souquet still thinks Efren Reyes is the best he's ever seen. And so does Rodney "The Rocket" Morris.

MORRIS: He is the greatest player to ever play the game and he will go down as the greatest. And I'm glad that in my life I got to see three great players: Efren Reyes, Michael Jordan and Tiger Woods. And I can die happy, being a sports guy.