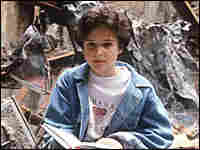 Zlata Filipoviæ was 11 years old and living in Sarajevo when The Diary of Anne Frank inspired her to start a diary of her own. Tobias Munthe hide caption

When war came to Sarajevo, 11-year-old Zlata Filipovic's life of piano lessons and tennis matches vanished. She began keeping a diary that chronicled her harrowing experiences.

Over much of the next two years, she hid in her cellar to escape shells and gunfire. After she and her family escaped, her diary won international recognition after it was published as Zlata's Diary: A Child's Life in Wartime Sarajevo. 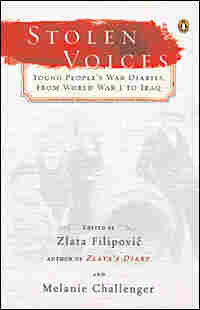 I'm trying to concentrate so I can do my homework (reading) but I simply can't. Something is going on in town. You can hear gunfire from the hills. Columns of people are spreading out from Dobrinja. They're trying to stop something, but they themselves don't know what. You can simply feel that something is coming, something very bad.

On TV I see people in front of the Bosnian-Herzegovinian parliament building. The radio keeps playing the same song: "Sarajevo, My Love." That's all very nice, but my stomach is still in knots and I can't concentrate on my homework any more.

I'm not going to school. All the schools in Sarajevo are closed. There's danger hiding in these hills above Sarajevo. But I think things are slowly calming down. The heavy shelling and explosions have stopped. There's occasional gunfire, but it quickly falls silent. Mommy and Daddy aren't going to work. They're buying food in huge quantities. Just in case, I guess. God forbid!

Still, it's very tense. Mommy is beside herself, Daddy tries to calm her down. Mommy has long conversations on the phone. She calls, other people call, the phone is in constant use.

The new sections of town — Dobrinja, Mojmilo, Vojnicko Polje — are being badly shelled. Everything is being destroyed, burned, the people are in shelters. Here in the middle of town, where we live, it's different. It's quiet. People go out. It was a nice warm spring day today. We went out too. Vaso Miskin Street was full of people, children. It looked like a peace march. People came out to be together, they don't want war. They want to live and enjoy themselves the way they used to. That's only natural, isn't it? Who likes or wants war, when it's the worst thing in the world?

I keep thinking about the march I joined today. It's bigger and stronger than war. That's why it will win. The people must be the ones to win, not the war, because war has nothing to do with humanity. War is something inhuman.

There's shooting; shells are falling. This really is WAR. Mommy and Daddy are worried, they sit up until late at night, talking. They're wondering what to do, but it's hard to know. Whether to leave and split up, or stay here together. Keka wants to take me to Ohrid. Mommy can't make up her mind — she's constantly in tears. She tries to hide it from me, but I see everything. I see that things aren't good here. There's no peace. War has suddenly entered our town, our homes, our thoughts, our lives. It's terrible.

War is no joke, it seems. It destroys, kills, burns, separates, brings unhappiness. Terrible shells fell today on Bascarsija, the old town center. Terrible explosions. We went down into the cellar, the cold, dark, revolting cellar. And ours isn't even all that safe. Mommy, Daddy, and I just stood there, holding on to each other in a corner that looked safe. Standing there in the dark, in the warmth of my parents' arms, I thought about leaving Sarajevo. Everybody is thinking about it, and so am I. I couldn't bear to go alone, to leave behind Mommy and Daddy, Grandma and Granddad. And going with just Mommy isn't any good either. The best would be for all three of us to go. But Daddy can't? So I've decided we should stay here together. Tomorrow I'll tell Keka that you have to be brave and stay with those you love and those who love you.

Today was truly, absolutely the worst day ever in Sarajevo. The shooting started around noon. Mommy and I moved into the hall. Daddy was in his office, under our flat, at the time. We told him on the interphone to run quickly to the downstairs lobby where we'd meet him. We brought Cicko [Zlata's canary] with us. The gunfire was getting worse, and we couldn't get over the wall to the Bobars, so we ran down to our own cellar.

The cellar is ugly, dark, and smelly. Mommy, who's terrified of mice, had two fears to cope with. The three of us were in the same corner as the other day. We listened to the pounding shells, the shooting, the thundering noise overhead. We even heard planes. At one moment, I realized that this awful cellar was the only place that could save our lives. Suddenly, it started to look almost warm and nice. It was the only way we could defend ourselves against all this terrible shooting. We heard glass shattering in our street. Horrible. I put my fingers in my ears to block out the terrible sounds. I was worried about Cicko. We had left him behind in the lobby. Would he catch cold there? Would something hit him? I was terribly hungry and thirsty. We had left our half-cooked lunch in the kitchen.

When the shooting died down a bit, Daddy ran over to our flat and brought us back some sandwiches. He said he could smell something burning and that the phones weren't working. He brought our TV set down to the cellar. That's when we learned that the main post office (near us) was on fire and that they had kidnapped our president ... I saw the post office in flames. A terrible sight. The firefighters battled with the raging fire. Daddy took a few photos of the post office being devoured by the flames....The whole flat smelled of the burning fire. God, and I used to pass by there every day. It has just been done up. It was huge and beautiful, and now it was being swallowed up by the flames. It was disappearing ... A terrible day. This has been the worst, most awful day in my eleven-year-old life. I hope it will be the only one.

The shooting seems to be dying down. I guess they've caused enough misery, although I don't know why. It has something to do with politics. I just hope the "kids" come to some agreement. Oh, if only they would, so we could live and breathe as human beings again ... I want it to stop for ever. PEACE! PEACE!

I didn't tell you, Mimmy, that we've arranged things in the flat. My room and Mommy's and Daddy's are too dangerous to be in. They face the hills, which is where they're shooting from. If only you knew how scared I am to go near the windows and into those rooms. So, we turned a safe corner of the sitting room into a "bedroom." We sleep on mattresses on the floor. It's strange and awful. But it's safer that way. We've turned everything around for safety. We put Cicko in the kitchen. He's safe there, although once the shooting starts there's nowhere safe except the cellar. I suppose all this will stop and we'll all go back to our usual places. Ciao!

I was almost positive the war would stop, but today ... Today a shell fell on the park in front of my house, the park where I used to play with my girlfriends. A lot of people were hurt. From what I hear Jaca, Jaca's mother, Selma, Nina, our neighbor Dado, and who knows how many other people who happened to be there were wounded. Dado, Jaca, and her mother have come home from the hospital; Selma lost a kidney, but I don't know how she is, because she's still in the hospital. AND NINA IS DEAD. A piece of shrapnel lodged in her brain and she died. She was such a sweet, nice girl. We went to kindergarten together, and we used to play together in the park. Is it possible I'll never see Nina again? Nina, an innocent eleven-year-old little girl — the victim of a stupid war. I feel sad. I cry and wonder why. She didn't do anything. A disgusting war has destroyed a young child's life. Nina, I'll always remember you as a wonderful little girl.

I'm not writing to you about me anymore. I'm writing to you about war, death, injuries, shells, sadness, and sorrow. Almost all my friends have left. Even if they were here, who knows whether we'd be able to see each other. The phones aren't working, we couldn't even talk to each other. Vanja and Andrej have gone to join Srdjan in Dubrovnik. The war has stopped over there. They're lucky. I was so unhappy because of that war in Dubrovnik. I never dreamed it would move to Sarajevo.

That's what Vaso Miskin Street looks like today. Two shells exploded in the street and one in the market. Mommy was nearby at the time. She ran to Grandma's and Grandad's. Daddy and I were beside ourselves because she hadn't come home. I saw some of it on TV but I still can't believe what I actually saw. It's unbelievable. I've got a lump in my throat and a knot in my tummy. HORRIBLE. They're taking the wounded to the hospital. It's a madhouse. We kept going to the window hoping to see Mommy, but she wasn't back. They released a list of the dead and wounded. Daddy and I were tearing our hair out. We didn't know what had happened to her. Was she alive? At 16:00, Daddy decided to go and check the hospital. He got dressed, and I got ready to go to the Bobars', so as not to stay at home alone. I looked out the window one more time and ... I SAW MOMMY RUNNING ACROSS THE BRIDGE. As she came into the house she started shaking and crying. Through her tears she told us how she had seen dismembered bodies. All the neighbors came because they had been afraid for her. Thank God, Mommy is with us. Thank God.

Read an Excerpt from 'Zlata's Diary' 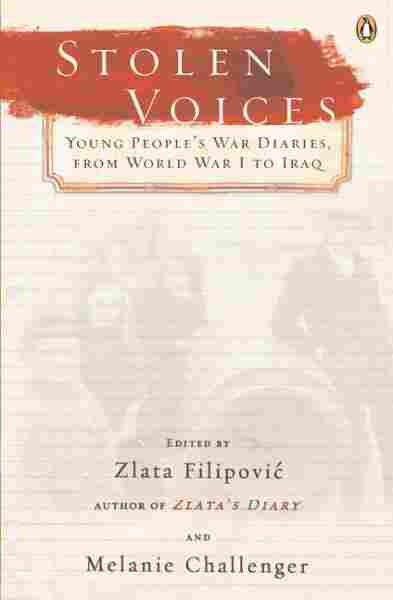 Young People's War Diaries, from World War I to Iraq

by Zlata Filipovic, Melanie Challenger and Olara A. Otunnu