Accessibility links
U.N. Report: Humans Behind Climate Change There is at least a 90 percent chance that human activities have caused the planet to warm up, according a climate change report sponsored by the United Nations. 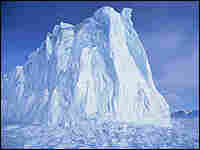 A glacier remnant in Baffin Bay in northwest Greenland. Glaciers are a wildcard in predicting climate change; the giant ice sheets could surge and dump large amounts of ice into the ocean, raising sea levels. Layne Kennedy/Corbis hide caption

There is at least a 90 percent chance that human activities have caused the planet to warm up. That's the finding of a climate change report sponsored by the United Nations and made public Friday.

The Intergovernmental Panel on Climate Change offers the most definitive word on the science of global warming. Governments around the world not only participate in the process, they listen carefully to the results.

The latest science assessment from this group finds that the planet is very likely to keep on warming rapidly as the result of human activities. The scientists say there is likely to be less rainfall near the equator, more rainfall in other parts of the globe, and more rapid melting of Arctic ice.

Sea level could rise by one to two feet in the coming century. That's a lower estimate than the group's previous report offered six years ago. But it doesn't include a possible wildcard: Ice sheets in Greenland and Antarctica can possibly surge and dump large amounts of ice into the ocean.

A brief look at the main findings of the Intergovernmental Panel on Climate Change report:

THE CAUSE: Global warming is "very likely" caused by man - the strongest conclusion to date. Concentrations of heat-trapping greenhouse gases in the planet's atmosphere "have increased markedly as a result of human activities since 1750," mainly from the use of fossil fuels such as oil, gas and coal, and because of agriculture.

THE OUTLOOK: Hotter temperatures and rises in sea level "would continue for centuries" — no matter how much humans control their pollution. It is "very likely" that heat waves, hot weather and heavy rainfalls could become more frequent. Toward the end of the century, sea ice in the Arctic may disappear "almost entirely" in summer.

SEA LEVELS: A rise of 7-23 inches in sea level is projected by the end of the century. An additional rise of 3.9-7.8 inches is possible if the recent, surprising melting of polar ice sheets continues.

HURRICANES: "More likely than not," the increase in hurricane and tropical cyclone strength seen since 1970 can be attributed to man-made global warming. Scientists said global warming's connection varies with storms in different parts of the world, but that it influences the storms that strike the Americas. Man-made factors have "likely" contributed to changes in wind patterns. It also is "likely" that typhoons and hurricanes will become more intense, with stronger winds and heavier rains.

Associated Press contributed to this report.