Accessibility links
Vietnam Expands Protection for People with HIV Vietnam is embarking on a campaign to end discrimination against people with AIDS and HIV. A new law will give new rights and protections to people with HIV, and the country is expanding the number of people getting treatment for AIDS. 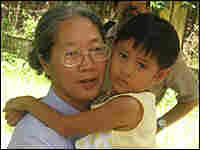 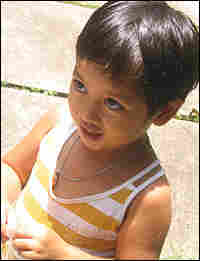 Nguyen Gnoc To-Vi, age 4, is receiving treatment for HIV at the Mai Hoa AIDS Center. Her mother died from HIV shortly after the two arrived at the center in April 2006. Richard Knox, NPR hide caption 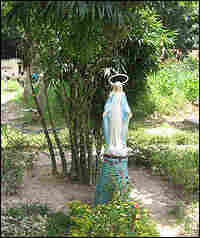 A garden at the Mai Hoa AIDS Center. Until recently the center was a hospice where homeless people with AIDS died. Now it's a treatment center where nearly all patients return to health. Richard Knox,, NPR hide caption

Vietnam is embarking on a campaign to end discrimination against people with AIDS and HIV. A new law will give new rights and protections to people with HIV, and the country is expanding the number of people getting treatment for AIDS.

About 6,500 people currently are receiving antiretroviral drugs. That's about one-quarter of the 25,000 Vietnamese that are estimated to need AIDS treatment now. About 300,000 people are thought to be infected with HIV out of a total population of 84 million.

The goal is to get the drugs to everybody who needs them within the next two years. Most of the funds come from PEPFAR – the President's Emergency Program for AIDS Relief. This year, the United States is expected to pump about $60 million into Vietnam, the only Asian country to get PEPFAR money.

AIDS treatment is beginning to make a difference. It's visible at the Mai Hoa AIDS Center in Cu Chi, about an hour's drive from downtown Ho Chi Minh City.

Tourists visit Cu Chi to see the tunnels dug by the Viet Cong during the "American War," as the Vietnamese call it. The Mai Hoa AIDS Center is a garden-like sanctuary down the road from the tunnel entrance. It's run by a diminutive, quiet-spoken Roman Catholic nun, Sister Tue Linh.

"We serve AIDS patients who have no home and no family to live with," she says. "In many cases, they were rejected by their families. Before they came here, many didn't even live like human beings."

Because of that stigma, it wasn't easy to establish the Mai Hoa AIDS Center. One province rejected Sister Tue Linh's plan. Then she got the land in Cu Chi.

"But the local authorities didn't want us because they feared that HIV was related to drug users," she says. "The former Prime Minister told the authorities this land was our land. He said, 'We defeated the French, we defeated the Americans, so why should we fear AIDS?' That's how we came into being."

Dr. Eric Krakauer of Harvard Medical School says when he first met Sister Tue Linh five years ago, her center was a place where homeless people with AIDS came to die.

"They had a special room, or a couple of special rooms, set aside that were referred to as 'screaming rooms' --- a place where patients who were in extreme distress were taken so as not to upset the other patients," Krakauer says.

Now that the Mai Hoa AIDS Center provides treatment, hardly anyone dies there. But its patients are still rejected by their families and communities.

"If you're a member of a family in which there's someone with AIDS, your kids might have trouble going to school," Krakauer says. "You might have had difficulty selling your vegetables in the market. People sometimes stayed away out of fear, not only from people who had HIV infection but also from their family members."

Vietnam officials aim to stamp out that stigma. Last year, experts warned them that the country could see a million new HIV infections over the next few years, if it didn't take strong action.

That galvanized the National Assembly, which passed a comprehensive new law on AIDS and HIV. The law went into effect Jan.1. It's one of the strongest pieces of AIDS legislation in the world.

Krakauer paged through the statute recently.

"This is quite good," he says, pointing to one provision. "Under 'Prohibited Acts' (it says) 'Refusing to provide medical examination or treatment to a patient for knowing or suspecting that such person is infected with HIV.' That's a stronger prohibition against refusing to provide care than exists in Western countries."

Under the law, relatives, neighbors and friends are expected to support and are for people with HIV. But the law goes beyond just telling people not to reject those with AIDS.

"This is really important --- 'not allowed to terminate job contract of an employee or cause difficulties to this person in his or her work on the ground that such person is infected with HIV,' Krakauer adds about another section of the law. "That's really powerful."

The law also promotes methadone treatment for drug addicts to prevent them from spreading HIV through dirty needles. It's a tremendous change in the attitude toward drug users in Vietnam. The nation has long taken a more punitive approach toward illicit drug use, calling it a "social evil" and putting drug users in detention centers.

In most places, social change isn't as easy as passing a law. But in Vietnam, from the National Assembly down to the local commune, village and hamlet, society is highly organized. So when government wants things to change, it often is able to make it happen.

And as more people get treatment for AIDS, attitudes change and the disease becomes less fearsome.

At the Mai Hoa AIDS Center, most of the orphans are already on treatment.

One 4-year-old girl, when given a shiny trinket from America, immediately runs outdoors with it, straight to a glass case containing row on row of ceramic urns. Each one contains the ashes of someone who died here.

The little girl stands on tiptoe to show the trinket to a photo on one particular urn. It's a picture of a young woman with long dark hair, staring soberly at the camera.

"It's my mother," the little girl says through a translator.

Sister Tue Linh tells the girl's story. "When she first came here, she had no name, so we named her Nguyen Ngoc To-Vi."

Her mother, Nguyen Thi Xuan-Em, owned a coffee shop. She got infected with HIV from her boyfriend, the nun says, and the little girl got the virus during childbirth. Mother and daughter came to Mai Hoa in April. Two months later, the 25-year-old mother was dead.

Back in her office, Sister Tue Linh says her AIDS orphans are doing well with treatment. But they still aren't welcome at the local school, so a teacher comes to Mai Hoa.

"In the past, when we mention HIV/AIDS, it meant drug users and prostitution and it's evil. And so people fear it," she says. "But now maybe people will change their way of thinking and separate AIDS from other evils."

Until that happens, though, she's worried that the people being treated at her center will have no place to go when they get better. So she's planning a new venture: a little community of people with HIV next door to the treatment center.

It will be a place, she says, where her orphans can grow up, get married, and grow their own vegetables.