Accessibility links
U.S., Iraqi Forces Clamp Down on Baghdad U.S. and Iraqi commanders say the command structure for an increase in American and Iraqi forces is being put in place. The next step is to flood the streets of Baghdad with troops. 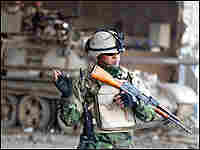 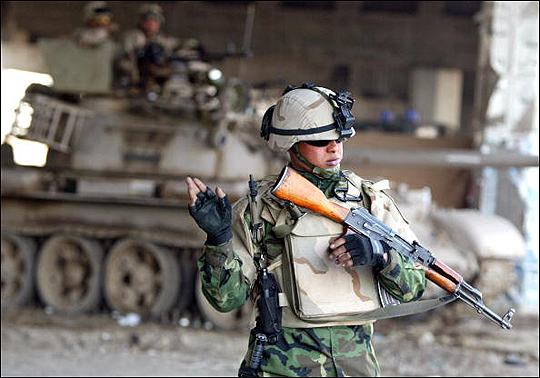 An Iraqi army soldier mans a checkpoint in Baghdad.

Chart military and civilian deaths in Iraq and hear key moments from the war.

There are noticeably more checkpoints across Baghdad Monday. The next step is to flood the streets of Baghdad with U.S. and Iraqi troops.

The influx of thousands of troops will continue over the next several months — a last-ditch effort to stem worsening bloodshed between minority Sunni Arabs and the politically dominant Shiites.

The number of U.S. and Iraqi troops in Baghdad will double, and this time all Iraqi forces — army and police — will come under a unified command. American forces will be working alongside them. It's hoped this will lead to better control and better coordination.

At a council meeting in a Shiite area called Zafaraniya in east Baghdad, an Iraqi colonel, accompanied by his American partners, told local leaders that today is the beginning of a new era for the Iraqi Army and the Iraqi police.

Baghdad now bristles with mini armies. Security details attached to political parties and tribes force their way through the streets, guns at the ready. The colonel says this will not be tolerated in his sector any more.

U.S. Capt. Brittan Craftan will help run the station at Zafaraniya. "We're still ironing out how we're going to run things," he said. "It's not necessarily where we want to be now, but we'll get there."

But outside the joint security station, beyond the guarded perimeter and the hum of the Humvees, not everyone supports the new plan. Children taunt the U.S. and Iraqi Army officers from the sidelines. A translator explains that they said, among other things: "You're occupiers. Get out."

The challenge is to get Iraqis to believe in their security forces.

Gen. Abdullah Mohammad Khamas commands the 9th Iraqi Army Division and all of east Baghdad. He has seen numerous plans fail in the past. But Abdullah believes this one has a chance.

But problems that bedeviled past plans are still there. While there will be more Iraqi units on the ground, they are still far from full strength. He says more and more soldiers are going AWOL.

In the long run-up to the surge, there is evidence some militias and insurgents have gone underground rather than face stepped up operations. Heckman acknowledges there is a risk that these groups might try to wait out the surge, only to re-emerge later. But he said that could buy the Iraqi forces time, allowing them to become more confident.

Heckman calls this America's last chance. He asks for patience, warning it could be the end of the summer before anyone can say if the surge is working or not.