Accessibility links
Haves and Have-Nots: Income Inequality in America An America where some have more than others is nothing new. But in the past generation, the financial gap between the rich and everyone else has grown ever wider. In a seven-part series, NPR explores the human face of income inequality. 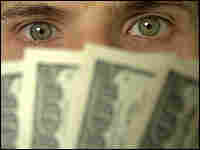 Over the past generation, the financial gulf between the rich and everyone else has widened. hide caption 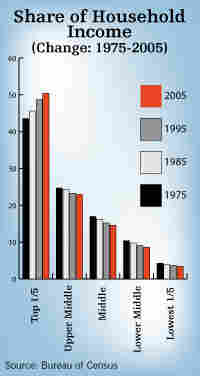 The wealth gap in America has long been in the making. In the 30 years between 1975 and 2005, U.S. households in the bottom 80 percent income bracket saw their share of national income actually fall. Those in the bottom 40 percent saw a drop in their incomes when adjusted for inflation. Only the top 20 percent of households experienced an increase their share of the total national income; much of that went to households in the highest 5 percent of the income bracket. 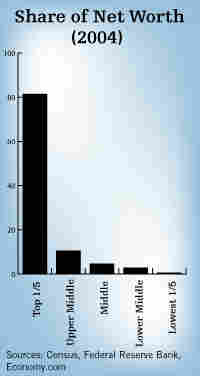 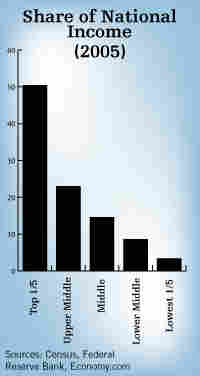 Households in the top fifth of the income bracket earn almost half of the nation's income.

An America where some have more money than others is nothing new. But in the past generation, the financial gap between the rich and everyone else has grown ever wider.

This week, NPR features a seven-part series that explores the human side of income inequality in the United States. We'll have stories about workers who are severed from the middle class when their manufacturing jobs disappear. We'll be speaking with people like Larry Podeswik, a wiry 52-year-old ex-Marine who lost the best-paying job of his life when the Carrier Air Conditioning company shut down its factory in Syracuse, N.Y.

We'll meet people who have succeeded beyond their wildest expectations, because their particular skills meshed perfectly with the Internet age. We'll explore the role of luck and timing — and marriage. And we'll look at what happens when middle- and working-class students attend an elite college with much-more-affluent peers.

The Very Rich... and Everyone Else

To get a sense of how the very wealthy have prospered over the past generation, consider this: The share of total income going to the top-earning 1 percent of Americans went from 8 percent in 1980 to 16 percent in 2004.

That doesn't mean that the average family is worse off than a generation ago; more people own homes, go to college, drive reliable cars and have access to sophisticated health care than ever before. But while the average family has done well, the very rich have done much, much better.

One reason: gains in the stock market. Affluent people own more stocks, and executives are often paid in stock or stock options. So when the market does well, their wealth accelerates quickly. Over the past 10 years, for example, the S&P 500, a broad proxy for the market, has increased 86 percent. At the same time, the people at the very top saw their incomes surge: In the 1970s, corporate chief executives earned 30 times as much as the average worker. Ten years ago, CEO compensation was 116 times the average. CEOs now earn close to 300 times as much as the average worker.

During the same 10-year period, American workers became among the most productive in the rich, industrialized, world. But the growth in their wages, when adjusted for inflation, was spotty at best.

What's Behind the Gap?

This widening gulf between the haves and have-nots has been a consistent trend for a generation or more. Economists largely agree about the primary underlying reasons. New technology has made many jobs obsolete, while creating dramatic opportunities for wealth in computers, finance, and media and entertainment. Global competition has done the same. As middle-class assembly-line jobs vanish, and routine white-collar work gets outsourced overseas, the value of education and special skills rises. The power of unions continues to decline.

For people in the broad middle class, the economic picture over the past decade has been mixed. Unemployment has been low and inflation largely contained. But behind those reassuring trends, you'll find a lot of volatility in labor markets — what economists call "churn." In short, there's more hiring and firing going on.

That churn had led to new opportunities for many workers, but caused hardship and anxiety for many others. Add to this the fast-rising cost of health care and the decline of employer-paid pensions, and you understand why many middle-class families describe themselves as financially squeezed. Low-income Americans, of course, are financially squeezed as well, only more so.

Is the System Broken?

Even the staunchest free-market advocates agree that a widening income gap can be harmful to a society if it cuts people off from economic opportunity. But they aren't convinced that is happening now.

Economists and others who dismiss fears about the income gap point to the low unemployment rate, rising home ownership and a fertile environment for entrepreneurship as evidence that economic opportunity is alive and well. And they argue that it's fine and well if the rich are getting a lot richer, as long as most other people make some economic progress and have the opportunity to make a lot more.

But others – including many politicians — are convinced that something has gone awry in our economic system, threatening the underpinning of the American Dream. Former Sen. John Edwards of North Carolina based his 2004 bid for the Democratic nomination for president on a "two Americas" theme. Democrat James Webb made economic insecurity a centerpiece of his Senate victory in traditionally Republican Virginia. President Bush hasn't emphasized income inequality much during his administration. But he pointedly mentioned it twice last week in a speech on Wall Street. Better schools, he said, can help close the wealth divide.

Democrats in Congress have begun to introduce legislation designed to assist lower- and middle-income Americans, from raising the minimum wage to cutting interest rates on student loans. They will try to change labor laws to make it easier for unions to organize. And many will oppose an extension of the Bush administration tax cuts that have benefited wealthier Americans.

Conservatives tend to be mistrustful of any attempt to fix income inequality by making new laws. And they argue that the big increase in single-parent families has contributed significantly to the wealth gap — more so than liberals often acknowledge.

Economists of all political persuasions believe income inequality transcends partisan politics: Neither party caused it, and neither party has the means to reverse it. There are just too many forces at work for the wealth gap to be halted by a flurry of bills passed in Washington.