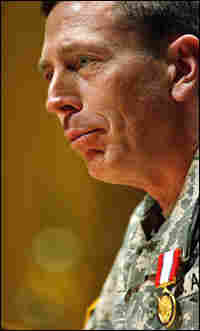 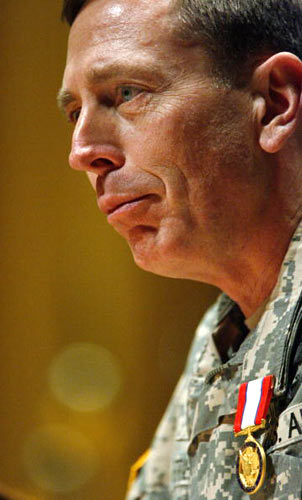 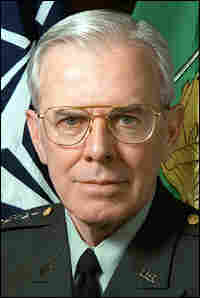 John Galvin commanded Petraeus at Fort Stewart, Ga. "I was astounded with him," the retired general says of his former aide. Dept. of Defense hide caption

Hear excerpts from NPR interviews with Gen. Petraeus and read his critique of U.S. counterinsurgency strategy. 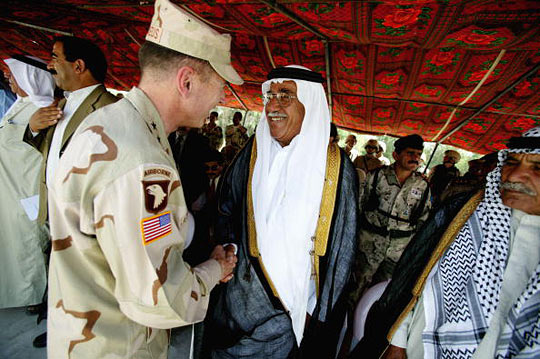 This week, a new U.S. commander arrives in Iraq. Lt. Gen. David Petraeus just earned a fourth star, a rank that few soldiers ever reach. Petraeus, who was previously in charge of training Iraqi troops, has reached this stage in his career by building key relationships and maintaining strong ties with superiors and subordinates.

Which is how the general may end up in a push-up contest with a corporal.

That's just one of the many ways that David Petraeus wins over people — and one way he likes to compete.

'A Test of Wills'

Now, Petraeus returns to a brutal competition of a different kind — which he described to the Senate last month.

"We face a determined, adaptable, barbaric enemy," Petraeus said. "He will try to wait us out. In fact, any such endeavor is a test of wills, and there are no guarantees."

Petraeus, 54, is a native of New York. That's where he was attending West Point during the last long war.

"We watched Vietnam end as we were sitting in classrooms," says Conrad Crane, a classmate at the military academy. Petraeus later wrote a dissertation on the lessons of that war, Crane says.

He wasn't as big as some soldiers — a wiry man of average height. But Daniel Kaufman, an officer who later supervised him, says the Army looked for soldiers like Petraeus.

"Really, by the time they're commanding companies as young officers, as captains, that's really the first sort of cut, as it were," Kaufman says. "Do they really get it, do they know how to do it? But more to the point, what kind of mental acuity do they bring to the job? Are they just people who do what you tell them, or are they people who know how to ask the right kinds of questions and who make things better?"

In Petraeus' case, the Army fully funded his higher education, sending him to Princeton.

"And so you get a first-rate graduate education," Kaufman says. "And so, intellectually, you're a different duck."

The kind that commanders wanted on their staffs.

"I was astounded with him," says John Galvin, who commanded Petraeus at Fort Stewart, Ga. "He is so bright and so perceptive."

Later, Galvin commanded U.S. forces in Europe, and he instructed his young aide to critique him.

Galvin is retired now, but his former aide keeps in touch.

That's true of many people who came in contact with Petraeus. He is a constant e-mailer with people like Daniel Kaufman, his former colleague at West Point, and now president of Georgia Gwinnett College.

"It's disconcerting because you send him an e-mail and you figure, this guy's busy," Kaufman says. "And in 15 minutes, you get an answer back. And so I always write him and I say, 'Dave, why are you answering e-mails from obscure college presidents when you should be running the world?'"

Often enough, Petraeus is e-mailing influential people, the kind he seems to meet even when he isn't trying.

In 1991, Petraeus suffered an injury that his trauma surgeon described this way: "A soldier had fallen in a training exercise and his M-16 had live ammunition. It went off and from about 40 meters, Dave Petraeus had been shot in the chest." That trauma surgeon who operated on Petraeus was former Senate majority leader Bill Frist.

They stayed in touch, became friends, and talked often as the war in Iraq began.

"When he comes into your office and in a period of five to 10 minutes reflects that understanding of where we are at this point in history and outlines a very clear, strategic plan of how he will train Iraqi soldiers, it's quite appealing," Frist says.

Petraeus took charge of training Iraqi troops. Before that, he commanded U.S. troops in Mosul.

The American occupation had hardly begun in 2003, when he gathered hundreds of Iraqis to choose their own local government.

"By being here today, you are participating in the birth of the democratic process in Iraq," Petraeus said then. "This is an historic occasion and an important step forward for Mosul and for Iraq."

Petraeus set out to build relationships with Iraqis, just as he had with superiors and subordinates. He was praised for restoring Mosul's government and jump-starting its economy.

That made his reputation outside the Army, though he told NPR at the time that he understood the risk.

"Every city that we liberated, we were applauded and given thumbs up everywhere we went," he said. "It's temporary, if we don't get it right."

Some wondered whether Petraeus got it entirely right. Mosul's violence increased after he left.

"He returned into the Mosul City Council and the Mosul city services a lot of former Baathists and a lot of Islamists. And in the short term, Mosul became very, very quiet. But the question is whether Mosul became a base for the insurgency. One example would be Mohammed Kheiri Barhawi, who was a brigadier general under the Baathist regime. And he was made the chief of police. Well, right after Gen. Petraeus left, it turned out that this general was working for the insurgents the whole time."

The general's supporters contacted Rubin. They said reconciliation was the best available course. They said the police chief was helpful at first, and was never proven to have gone over to the enemy, though Rubin stayed skeptical.

Petraeus faced more critics when he worked on a counter-insurgency guide with his old classmate, Conrad Crane.

"Any kind of criticism immediately got engaged," Crane says.

'We Need to Talk'

Take the time a retired military strategist wrote that an early draft of the guide had "fatally wrong prescriptions" for "fairy-tale conflicts."

"I thought, this is going to kill American troops for nothing. Since I joined the Army, I had never been as angry about anything the Army produced," says Ralph Peters, who, like so many soldiers, kept up an e-mail correspondence with Petraeus.

"After the article was published, the line went dead for a couple weeks," Peters says. "But then Dave Petraeus came back and said, 'Now we need to talk about this.' And he asked me to come out to Fort Leavenworth and sit down with his doctrine writers and argue it out."

The manual did change "significantly," Peters says. "I was just a minor catalyst for that change. The real driving force, I think was the Marine Corps, which wanted more balance in the manual. The final document is still a deeply flawed manual, but it's much better."

And Peters now speaks of Petraeus as the military's best hope in Iraq.

Determining the Iraqis' Will

"I would argue he's not going back to a country to fight a counter-insurgency campaign," McCaffrey says. "He's going back to try to mitigate, moderate, end a civil war, and those are two entirely different challenges. You know, he's not there to root out Baathist dead-enders from among a population yearning for democracy. He's got Shia and Sunni involved in a death struggle for political power and survival."

So the first job for Petraeus will be to measure the Iraqis he's working with.

He explained his job this way before the Senate: "I need to get back to a country that I haven't been in in 16 months and determine what the will is. And as I mentioned earlier, if I detect that they don't want it as much as we want it, I will report that to my boss."

Petraeus has spent a career acting swiftly — and building relationships. In Iraq, he now has limited time to build relationships that work.

Lt. Gen. David Petraeus has been shaped by powerful men. Among them are some of the military's most respected officers. One of his mentors is former NATO Supreme Allied Commander Gen. John Galvin.

The two met when Galvin took the command of the 21st Infantry Division in 1981. Then Capt. Petraeus became the general's aide and started on a trial basis. After a month or two, your job is going to change, Galvin told Petraeus. "My mission is to command this division; your mission is to make me better at it than I am."

Galvin tasked Petraeus with visiting soldiers on the base he commanded and reporting back to him. "I don't want you around at my beck and call. When we get there, you go your way and I'll go mine and we'll compare notes when we get back."

Another powerful man that has watched Petraeus' rise is retired Gen. Barry McCaffery. He was once in charge of the U.S. Southern Command and says that mentors like Galvin are usually motivated by two things: "There is… an element of idealism and greed combined on why people shoot up through the ranks. The idealism is that people look at Petraeus and say… 'This guy can help shape national security policy over the coming 20 years.' The greed part is that 'If I engage this guy in my complex duties, I will be able to go home an hour early every night….'"

Galvin is now retired, but still keeps in touch with Petraeus. Their relationship has grown over the years to include their families. And that has given Galvin a deeper understanding of his former aide.

He once mentioned to Petraeus' mother, who was a librarian, that he was interested in the works of Charles Dickens. "She just quietly began picking up loose volumes," Galvin says. "It was like a coat of many colors... fat and thin, tall and short. And I've got my Dickens. She did that… over a period of 15 years."

Asked if he sees a common characteristic between mother and son, Galvin says of his former aide: "He is a giver of things, and not a taker of things. And it's not just sheer generosity, it's that he cares."