Accessibility links
Cyclists Switch to Single-Speed Bikes A surprising — and increasing — number of bicyclists have renounced the technology of shifting gears. They're adopting the fixed-gear bike, and say it's a pure and honest biking experience. 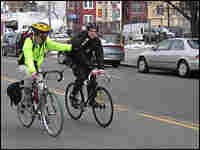 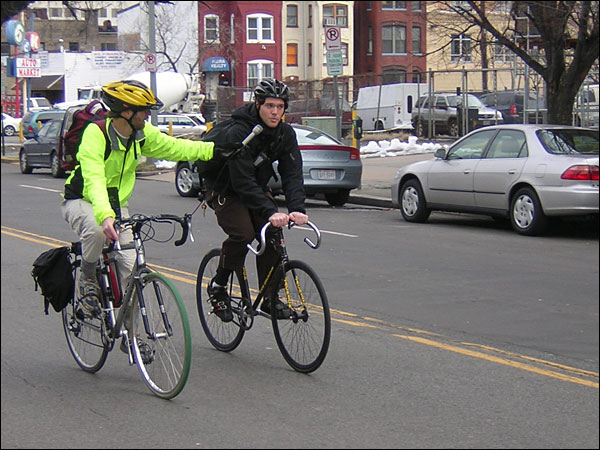 It's the latest, coolest thing in pedal-powered transportation: Bikes with no gears and no brakes. You'll find them on city streets from New York to San Francisco, mostly in the company of young, rugged-looking bicyclists.

Take a close look at Vincent Betette's bicycle, for instance. Betette is a bike messenger in Washington, D.C. He rides a sleek machine that is stripped down to the bare essentials: Two wheels on a light steel frame with curving handlebars of bare metal. There are no cables, and no gears — and there's no coasting, either. This is a "fixed-gear" bike; if the wheels are turning, the pedals have to turn too, the way bicycles worked 100 years ago.

The pedals don't just make the bike go. They're also what Betette uses to stop, because this bike has no brakes. If Betette needs to slow down, he pushes back against the pedals, forcing his legs to go slower. And if a car cuts in front of him, "I just lock my legs up and kind of slide out of the way."

Such bikes are also commonly called "track bikes." They are what Olympic racers ride on indoor banked tracks called velodromes.

Now they're taking over the streets. Bike messengers discovered them first. These street matadors liked the ruggedness of track bikes. Courier Andy Zalan says they also liked the way the bikes feel — there's something addictive about riding a bike in which your feet are tied to the wheels, he says — and the way they look. "There's something beautiful in the simplicity of a track bike."

It's that "look," says Vincent Betette, that seems to have caught on with the young and hip crowd. "We have a name for them," he says. "FAMS: Fake-a** messengers. That's what we call them. They got our bags, they got our bikes. It's a fashion accessory now."

Track bikes have even spread to the suit and tie crowd. Michael Simpson gets to his office in downtown Washington by by riding 17 miles on a old red bicycle that he converted to a fixed-gear. "It feels like being a kid again. You don't have to worry about what gear you're in, or what components you have. You just get on the bike and go where you want to go," he says.

But when he was a kid, didn't he want gears? "Oh, I definitely wanted gears when I was kid," he says, laughing.

Now that he's a grownup, Simpson is also a little more cautious. His bike — like Andy Zalan's — does have a hand brake. It spoils that pure, minimalist look a bit, but a brake makes it less likely that you'll crash into a bus.