Accessibility links
Colleges Face Challenge of the Class Divide In the United States, an education at an elite college can be a gateway to the upper class. But few can afford it. Amherst College in Massachusetts tries to be more inclusive by leveling the playing field for students. 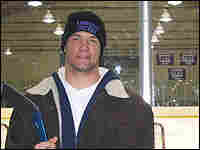 In the United States, a good education at an elite private college can be a gateway into the upper class. But that education is also very expensive. Tuition and board at the most prestigious colleges now top $45,000 a year. That's even a stretch for many upper-middle-income families. At prices like these, many colleges risk becoming bastions of the rich and super-rich. Like other elite schools, Amherst College in Massachusetts has struggled to become more inclusive by trying to level the economic playing field for students. Amherst College President Anthony Marx sees class as one of the fundamental problems facing American colleges and universities today.

"I think everyone in higher education is aware of the growing economic divide in this country, and the challenges that divide creates for institutions that want the best students from across the society," he says.

He hopes Amherst can overcome that challenge. With its spacious college green lawns and weathered red-brick buildings, Amherst College is the picture of WASPy privilege. However, the school is not homogenous. Despite the fact that almost everyone in the cafeteria is dressed in fleece jackets, sweaters and jeans, the students here run the gamut from super-rich to working-class. Senior Jake Maguire says class differences play a large role at the school. He remembers arriving on campus for the first time and watching people move into their rooms.

"There was this one kid moving things from his car to his room with a Segway Scooter – those $3,000 things," Maguire says. I remember in the winter of that year, I noticed one of my friends drove a Porsche Carrera. I'm thinking, I don't know adults who drive that."

Maguire grew up outside Boston. His parents are college educated, but he says the rich kids he's met at Amherst are slightly different from people he's known in the past. They're not overtly snobbish, he says, but they have expectations and experiences that people in his middle-class suburb never considered.

The Academic Advantages of Wealth

Maguire meets up with a friend, Keith Erzinger, in a campus coffee shop. The two met in a campus Christian group and have become friendly, though their backgrounds are quite different. Maguire attended public school. He is at Amherst with loans and financial aid, and he has a work-study job. Erzinger attended a private school in Colorado. His father is a financial consultant, who pays his tuition with money he set aside. Last summer, he worked at the New York Stock Exchange – the kind of job you get using connections. He understands that rich kids have advantages, but he tends to see class as less important than Maguire does.

To Amherst President Marx, part of the school's historic mission is to bridge the gap between students like Erzinger and Maguire. Amherst was co-founded by Noah Webster to train indigent students as missionaries. It's the kind of place where people naturally talk about class distinctions. The student government once cut off funding for the ski club because there wasn't enough money to ensure that all students could go on every trip. Today, half of the students receive financial aid.

But economic diversity on campus presents some challenges.

Marx says it's not just the poor who are at a disadvantage. Even bright students from middle-class schools can lag behind. Amherst offers tutoring and mentoring programs to try to level the playing field.

On the Playing Field

In addition to playing for the hockey team, Griffin Bidron has a work-study job sharpening skates at the ice-skating rink. He grew up in a farming community in Michigan where, he says, nobody was wealthy. Bidron knows how much money matters. Last summer he wanted to accept an unpaid internship on Capitol Hill — a job is one that wealthy students can easily take. Bidron's father couldn't afford to support him throughout the summer and wanted him to come home and take a landscaping job. In the end, Bidron was able to secure a grant from Amherst that allowed him to take the internship. The school also buys suits for students with job interviews. Programs like these are popular on campus, but some people worry that the focus on class may detract from Amherst's core mission of education.

Physics professor David Hall thinks that correcting for inequities in education is a laudable goal but that it may be beyond the school's resources.

"Can you undo 12 years of damage from public schools in a semester or two semesters?" he asks.

But President Marx believes that American colleges have no choice but to try to address class. He says it's their responsibility as educators, noting that in a society that's becoming more divided by class, schools like Amherst College are among the few places where people of all income levels can interact.

Counseling to Deal with Paying for College June 6, 2005
Signs That College Tuition Hikes May Ease a Bit Oct. 24, 2006