Accessibility links
Former Vice President Al Gore (TN) Gore's campaign is gaining steam — but not the dirty, coal-fired kind. The former vice president has scored big with his campaign against global warming. But he has done nothing to suggest he'll enter the White House race. Status: Not Declared.

Candidacy Status: Has not declared candidacy. 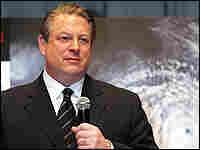 Al Gore's campaign is gaining steam — but not the dirty, coal-fired kind. The former vice president has scored big with his campaign against global warming, winning converts against greenhouse gases and an Academy Award. Whether that could translate to a successful presidential campaign is another matter.

Gore is still popular with the Democratic faithful, some of whom believe he was robbed of the presidency by the Supreme Court in 2000. They imagine a very different world today had Gore prevailed back then.

As with global warming, more Americans have also come around to agree with Gore in his early opposition to the war in Iraq. Gore was speaking out against the prospect of going to war when some of the leading Democratic candidates — Hillary Clinton, John Edwards, Joe Biden and Chris Dodd — voted for it. What's more, the hit movie An Inconvenient Truth displayed a side of Al Gore — natural and good-humored — that was often missing during his campaign eight years ago.

But not everyone wants to see another Gore candidacy. Many feel that Gore had his shot, that he "blew it" in 2000, and that the current field of candidates is more than sufficient.

Outside of a comedy sketch with fellow environmentalist Leonardo DiCaprio during the Oscars telecast, Gore has done nothing to suggest he'll enter the White House race. He has apparently told friends he has no intention of running. Still, a late entry by the former vice president could add enough heat to the contest to melt a few more inches of polar ice cap.