Accessibility links
Oranges and Chocolate: Romancing the Rind Orange and chocolate taste great together, according to T. Susan Chang (and her husband). She shares recipes that combine citrus, chocolate and the currency of love.

Oranges and Chocolate: Romancing the Rind

Oranges and Chocolate: Romancing the Rind 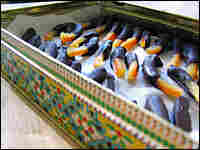 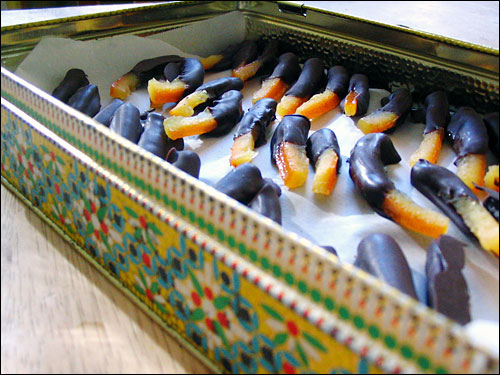 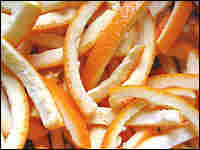 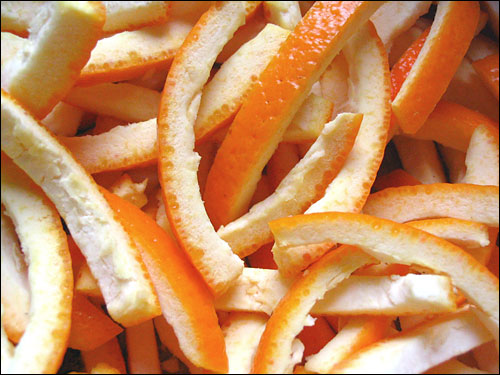 Making candied orange peel is a labor of love: It has to be peeled, trimmed, sliced, blanched, drained, blanched twice more, simmered in sugar syrup and dried.

T. Susan Chang is a New England-based freelance writer and a Kellogg Food and Society Policy Fellow. She also is the Boston Globe's regular cookbook reviewer, and her articles on cooking, gardening and nutrition appear in a variety of national and regional publications. You can find more information at her Web site, www.tsusanchang.com.

Last winter, I decided to make a special present for my husband, Randy, who loves chocolate with an epic passion.

Although he is capable of being abstemious at the dinner table when the occasion requires, he is powerless before the siren lure of dark chocolate — particularly when it is languidly wrapped about a bit of candied orange rind.

It is this confection that I secretly resolved to undertake, disposing of any evidence and failed prototypes by means of the nearest container — that is to say, myself.

So rapturous were the results that the chocolate orange rinds are well on their way to becoming a Valentine's tradition in our house.

That I could contemplate making them at all is thanks to 200 years of colonial rapacity, since neither oranges nor chocolate is native to this country.

The story of sweet oranges starts in China, several millennia ago. Citrus traveled, in its slow botanical way, across the near East; by 1400, the orange had found its way to Sicily. Sea travel and empire eased its passage to northern Europe.

But because the orange was perishable and grew only where it was warm, it remained rare late into the 19th century, when it could be found as a prize at the bottom of a Victorian Christmas stocking.

It wasn't until the advance in transportation infrastructure, freezing and canning brought about by World War II that the taste of orange became a winter commonplace. Even then, it was expensive to transport in a ripe and unaltered state.

The ripe and unaltered state of chocolate, on the other hand, would be recognizable to few.

Though natives of the Amazon Basin knew of its value and used its seeds for currency 1,000 years before Christ, the cacao pod would have been about as welcome in a Victorian Christmas stocking as a deflated football stuffed with insulation (which it strongly resembles).

The nibs must be separated, fermented and dried; the beans cleaned, roasted, winnowed, ground, conched, tempered and molded before the finished product achieves its signature state of smooth perfection.

All this means that chocolate was a luxury from the start. Fierce control of the considerable labor expense often reduced workers to a state of near-slavery (conditions which persist in places to this day).

Still, fussy, laborious chocolate made its way everywhere, commanding its own price before a swooning public.

In making chocolate orange peel, though, one soon finds it is the orange that is labor intensive. It has to be peeled, trimmed, sliced, blanched, drained, blanched twice more, simmered in sugar syrup and dried.

All this I did and more, hiding the sticky, translucent, sparkling rinds in a drafty, unused room, which I prayed the local fauna — squirrels, mice and humans aged 4, 45 and 72 --would find as uncomfortable as I did.

Unlike prepping the rinds, coating them in chocolate is simplicity itself: Melt the chocolate, dip the rinds. (You could temper the chocolate if you really wanted it to look nice.) That's about all there is to it. Then leave them to finish drying even if doing so means you have to bind yourself to the mast, as Odysseus did to resist the sirens' song.

While I try to eat local and live sustainable, I find these two tropical exotics — citrus from the farthest reaches of the Old World and cacao from the heart of the New — an irresistible pairing. Especially here in Massachusetts' dark and cold, so out of place and season.

To bite into chocolate orange mousse, or into the elemental chocolate orange rind itself, is to experience the force of taste at its strongest, when willpower lies trodden on the ground and the lizard brain shuts down in ecstasy.

It's no surprise if the flavor is somehow reminiscent of the king's ransom it would have taken to unite the pair a few centuries ago. I may not have sailed turbid seas or braved tropical doldrums to bring back precious cargo to my love, but I'll tell you, that storage room was plenty cold.

While you have them, they exert an uplifting effect on the household mood: A glass of wine appears in the kitchen before dinner. The compost gets emptied, and socks find their way into the hamper.

But there's no need to quantify the rate of exchange. I make chocolate orange rinds principally for love, the most powerful currency of all. Like oranges and chocolate, my husband and I have come a long way to find each other — and we're better off together than apart. 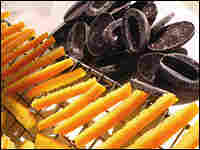 This recipe is adapted from Judith Sutton's Sweet Gratitude (Artisan 2005).

Using a serrated knife or other sharp knife, cut a thin slice off the top and bottom of each orange to expose the flesh. Score the peel of each orange into quarters, cutting through the white pith, and pull the quarters of peel off the orange. Using a sharp spoon, scrape off any stringy membranes from the inside of the peel (do not scrape off the white pith). Cut each quarter crosswise into 1/4-inch-wide strips.

Put the orange peel in a large heavy saucepan, add cold water to cover and bring to a boil. Drain. Repeat two more times (blanching the peel removes the bitterness). Return the orange peel to the saucepan, add cold water to cover by about 1 inch and bring to a boil. Reduce the heat and simmer gently, stirring occasionally, until the peel is tender when pierced with a knife, about 15 minutes. Drain and set aside.

Set a large wire rack, preferably mesh, over a baking sheet. Combine the corn syrup, sugar and water in the same saucepan in which you blanched the peel and bring to a boil, stirring to dissolve the sugar. Wash down the sides of the pan with a wet pastry brush to remove any sugar crystals (which could cause the syrup to crystallize) and add the orange peel.

Bring to a simmer, reduce the heat and simmer gently, stirring once or twice with a clean spoon, until the peel is translucent and very tender, and the syrup has reduced to a few spoonfuls, 30 to 40 minutes. (Do not allow the syrup to reduce to less than this, or the bottom of the pan will become too hot and will crystallize the sugar.)

Using a slotted spoon or a fork, transfer the peel to the wire rack to drain, separating all the strips of peel. Let cool and let stand until dry, at least 4 hours. (Once the orange peel is thoroughly dry, it can be stored in an airtight tin at room temperature for up to 1 week.)

Melt the chocolate over a double boiler, dip the orange peels and let dry on a wire rack

For a smoother texture, you can temper the chocolate first:

Place approximately 75 percent of the chocolate, roughly chopped, into a glass bowl. Finely chop the rest. Melt the majority of the chocolate over a small saucepan of water, being careful not to let any water fall on the chocolate, until it registers a temperature between 115 degrees and 120 degrees. Set the bowl aside for 10 minutes.

Finally, carefully reheat the cooled chocolate over the double boiler until it reaches 99 degrees. The chocolate is now tempered, and it will set up smoothly and quickly when the rinds are dipped.

This recipe is adapted from one I encountered during a course I took with pastry chef Nick Malgieri.

Cut the chocolate finely and place in a bowl over simmering water. Add butter. Melt together over low heat. Remove from heat and cool.

Combine egg yolks, sugar and Grand Marnier in a mixing bowl. Place over gently simmering water. Beat until thick with a hand whisk. Remove from heat and beat in an electric mixer with whisk attachment on medium speed until cold and thickened.

Beat cream until it holds its shape. Fold chocolate into beaten yolk mixture. Fold cream into chocolate mixture. Chill in the refrigerator for at least 2 hours, then serve.