Accessibility links
Adrenaline Flows When Medevac Unit Takes Flight In Al Kut, south of Baghdad, things can be quiet for days for an Arkansas National Guard medevac unit. But word of an injured soldier quickly sends the Boss Hog outfit into action, and into the air. 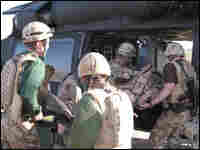 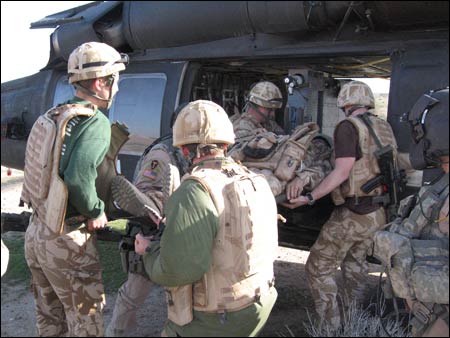 Members of the Arkansas National Guard medevac unit load an injured soldier into a Blackhawk helicopter near the Iranian border. 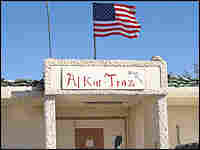 The Boss Hog outfit at Al Kut is 25 men living in a compound about 500 yards square. They call it Al Kut-Traz (like Alcatraz) because they're confined to the compound, even for meals. John McChesney, NPR hide caption 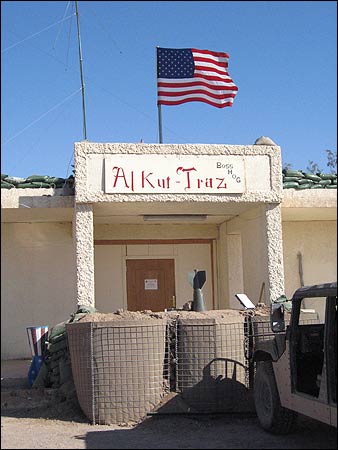 The Boss Hog outfit at Al Kut is 25 men living in a compound about 500 yards square. They call it Al Kut-Traz (like Alcatraz) because they're confined to the compound, even for meals. 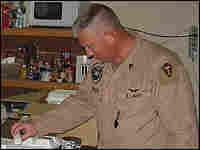 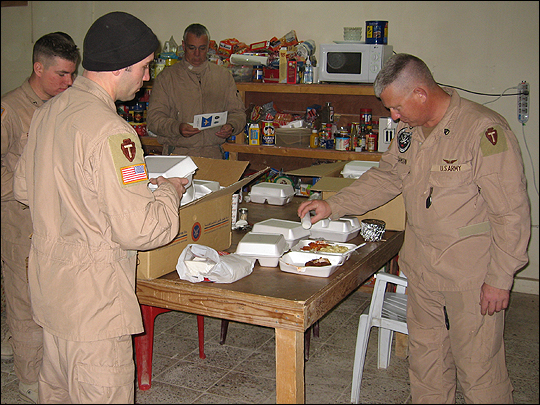 Sgt. Mike Williamson (right) and fellow soldiers grab a bite to eat in between missions.

In Al Kut, south of Baghdad, things can be quiet for days for an Arkansas National Guard medevac unit. But word of an injured soldier quickly sends the Boss Hog outfit into action and into the air.

Most of the news from Iraq comes out of Baghdad or Anbar province because generally that's where most of the bloodshed occurs. But there are American troops spread out all over the country, often in places that are rarely heard from. Yet their missions are often critical.

There's an Arkansas National Guard medevac unit at Camp Delta just outside the city of Al Kut on a bend of the Tigris river about 60 miles south of Baghdad. The unit calls itself Boss Hog, part of Charlie Company of the 111th Medevac, which calls itself the Painkillers.

The Boss Hog outfit at Al Kut consists of 25 men living in a compound about 500 yards square. The generator roars constantly. They call it Al Kut-Traz (like Alcatraz) because they're confined to the compound, even for meals. Things are quieter in southern Iraq, and these guys can sit for days with nothing happening... and then all hell breaks loose.

Word of an injured soldier near the Iranian border sends the unit into action. Members grab gear and run for a Blackhawk helicopter. The crew has only 15 minutes to get into the air. As in many of its missions, the crew doesn't know exactly what to expect when they arrive, so adrenaline is flowing.

The crew sprints over to a knot of soldiers supporting one man with his leg lifted slightly. They put him on a stretcher, load him aboard and take off for a hospital. Turns out he's a British soldier who had sprained his knee when he jumped off a truck. As the sun goes down, the crew dons night-vision goggles, scanning for muzzle flashes or smoke trails.

He is keenly aware of the dangers for helicopters here. The U.S. military in Baghdad said recently that all four of the helicopters lost in the past two weeks were shot down by enemy fire. Horton had a very personal connection to one crash that killed 12, including men from Arkansas.

"There were three of those on that aircraft that were very good friends of mine," Horton says.

To comply with the Geneva Accords, these medevac choppers are not equipped with machine guns. But Horton says he would like to have them anyway.

"It would make me feel better in this environment," he says. "I don't know [whether] the red cross makes a lot of difference these days. I know it used to or it used to symbolize that we're here helping — and we are. A lot of our missions we are flying Iraqi patients. Sometimes insurgents. I can honestly say that we have flown two insurgents in the last week and a half."

Not long ago, this outfit took part in a mass casualty evacuation from a battle in Najaf between Iraqi forces and a fanatical sect. Sgt. Sergeant Mike Williamson of Russellville, Ark., says he'll remember that day forever.

"Lo and behold, two children came in on litters" Williamson says. A girl, 7, and her 6-year-old brother were seriously wounded by shrapnel, probably from a grenade explosion in their house.

"I ended up going to assist with the little girl. She had some very severe injuries but was very alert," Williamson recalls. Through an interpreter, the girl said she had witnessed her parents being murdered in her house.

Williamson says a teddy bear brought a few smiles, but throughout the night, the girl would wake and begin crying. He would give her pain medicine, but that wasn't enough.

"She said, 'I miss my mom, I want my mom,' and that was tough for me. So I just spent time holding her hand and rubbing my fingers through her hair, just letting her know she was going to be taken care of."

They flew her and her brother to a Baghdad hospital.

"She grabbed onto me and didn't want me to leave," Williamson says. "That was tough. And I just kissed her gently on the forehead and had to leave so we could get back into our area in case another mission came in."

Williamson is the father of three children.