Accessibility links
Pentagon Creates Military Command for Africa The Pentagon is establishing a new military command for Africa, scheduled to begin operating by September 2008. The action addresses Africa's potential as a breeding ground for terrorism as well as its complex humanitarian needs. 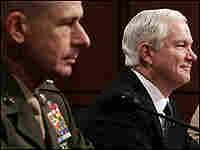 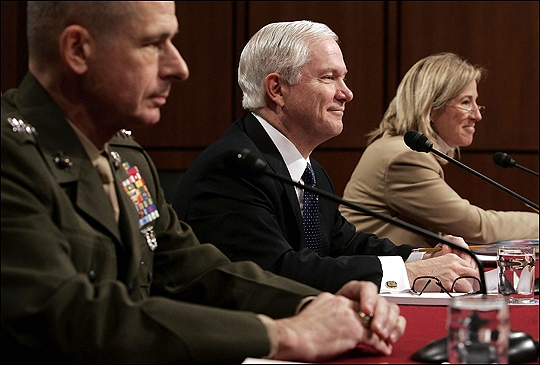 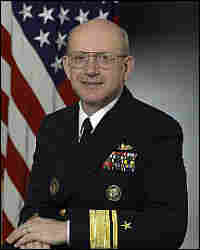 The Pentagon says it is creating a new unified military command for its operations in Africa. Africom, will cover all parts of the continent except Egypt, which will continue to fall under Central Command. Pentagon officials say the move signals Africa's growing importance to U.S. interests.

The idea for an Africa command has kicked around the halls of the Pentagon for more than a decade.

Last summer, then Defense Secretary Donald Rumsfeld formed a planning team to examine what it would take to get an Africa command up and running. In early December, Rumsfeld made the recommendation to President Bush, who authorized a new command on the same day Rumsfeld left office.

"This command will enable us to have a more effective and integrated approach than the current arrangement of dividing Africa between Central Command and European Command," Gates said.

Those two commands are overloaded because of the wars in Iraq and Afghanistan.

But the decision to create an Africa Command also reflects the rise in U.S. national security interests on the continent.

U.S. intelligence agents — and terrorism experts — have long been concerned about the increasing infiltration of al-Qaida and other terrorist organizations, especially in the northern trans-Saharan region.

The U.S. has launched a number of initiatives to counter the threat, including military and intelligence training missions by Special Forces units.

Navy Rear Adm. Robert Moeller, the man who will oversee the new Africa Command, says those types of programs will not change.

"We do not anticipate lessening any of the current focus, certainly in the north, in the Horn of Africa area," Moeller said, adding: "... We will now be in a position to look more closely at other areas of the continent as well."

The U.S. has other strategic interests in Africa. The continent will account for 20 to 25 percent of U.S. energy imports by the next decade.

Steven Morrison, the director of the Africa program at the Center for Strategic and International Studies, says the U.S/ is also trying to gain a foothold on the continent for other reasons, including "intensifying competition with China, India and others for influence and for access" and "rising commitments with respect to global health in Africa."

Morrison says the new command will shift U.S. involvement in Africa from a reactive to a proactive commitment.

The question that Africans will have is, 'At what price and how serious and how sustainable will the U.S. effort be,'" Morrison said. "And there's going to be a need now for an intensive conversation in selling of this concept within Africa."

Morrison says the promise this command holds is that will be about more than just the military. This one will be defined by interagency mix, combining intelligence, diplomatic, health and aid experts.

Pentagon officials say that the deputy commander's position is being set aside for a State Department official, rather than a military figure. Ambassador Robert Loftis, a senior security adviser at the State Department, says there are some political advisors at other military commands. Still, Loftis says, Africom will be different.

"What we've been working on here is really to try to find a way where the Department of Defense, Department of State, USAID, and eventually some of the other players from the federal government can find a way to work together more efficiently," he said. "Whether or not this turns into a model for other areas of the world, I don't know yet."

The Pentagon says that Africom will initially be based out of Germany, awaiting a permanent home on the continent. The new command is due to be in full operation by September 2008.