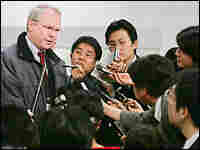 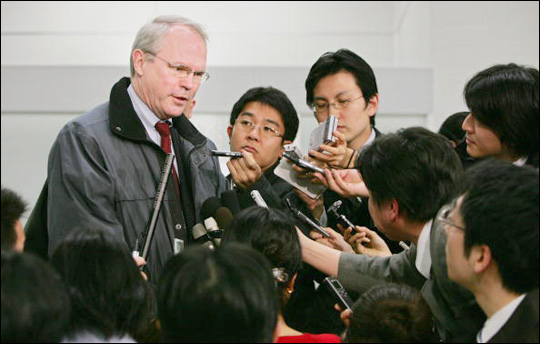 Christopher Hill, U.S. assistant secretary of state for East Asian and Pacific Affairs, speaks to reporters upon his arrival at Tokyo's Haneda Airport on Monday.

Six-nation talks aimed at persuading North Korea to abandon its nuclear weapons program will resume Thursday in Beijing. Assistant Secretary of State Christopher Hill, leader of the U.S. delegation, tells Renee Montagne what incentives can be offered to North Korea.

Exactly what are the five nations confronting North Korea — that would be Japan, Russia, China, South Korea and the U.S. — what are these countries prepared to offer North Korea at this point in time?

Well, basically, the deal is that North Korea needs to abandon all of its nuclear weapons programs. And, in return, they can expect some economic assistance, energy assistance and, essentially, a ticket into the international community.

We're looking to eventually normalize relations among states. It's all there in the Sept. '05 statement. And we have to see if we can implement it.

Isn't what you just said what's been offered to North Korea, more or less, all along?

Well, not really. I mean, it was negotiated over the summer of 2005. And, after we agreed on this, the North Koreans boycotted the talks over the fact that the U.S. was going after some of their illicit banking activities, which we did. But, of late, they've been willing to come back.

And that willingness suggests that these sorts of incentives are enough to get North Korea to abandon its nuclear program?

You recall, on Oct. 9 they actually exploded a nuclear device. And earlier in the summer, in July, they fired off some missiles. And I think China signaled pretty strongly to the North Koreans that they are going to need to shape up.

So China is a key player. But I think we are also a key player. Part of what we are doing is to negotiate and work as hard as we can to show China that there is really nothing more we can do through the diplomatic process, and encourage the Chinese to do more. We don't want a situation where China says, "look we can't do anything because the United States is not trying."

There is one nuclear reactor in North Korea that experts say could produce a nuclear weapon. Is that at the heart these discussions?

Well, to be sure, there is a nuclear reactor at a place called Yongbyon in North Korea, not to be confused with Yongpyong in South Korea, which is actually a ski resort. Yongbyon has something called a graphite-moderated reactor, something that they got from the Russians in the late '60s. And, yes, it produces plutonium. And the plutonium, depending on how hard they work the reactor, is enough for a bomb or two a year.

And then, in addition to that, we've had some real concerns about purchases of equipment that they've had in various corners that suggests that they have a highly enriched uranium program. That's another way to make bomb material.

But certainly, to get the reactor shut down, the one that is producing plutonium, that's a start. But it cannot be the finish.

Are you calling on them to shut that reactor down?

Well, you know, I don't want to get into the specific elements of what we're going to be doing in the talks. But certainly, that is the reactor that they produce the plutonium with and ultimately that reactor needs to be abandoned according to the Sept. '05 agreement.

Between the last talks, just before Christmas, and now, what has changed in North Korea's position, or even the signals it's sending out?

Well, it's interesting. Before Christmas we had some negotiations in Beijing that, frankly speaking, didn't go very far. But there were some conversations there that suggested we might be able to make some progress.

So, we had some follow-on discussions, on the basis of which, I think it's fair to say, we have some reason to hope that this next round can bear some fruit.

But we won't know until we really sit down. I mean, the six-party process is many things. But it offers no refuge for those in need of instant gratification, I'll tell you that! I mean this takes a while.