Accessibility links
Almost-NBA Players Take Home Paltry Salaries With an average annual salary of more than $5 million, NBA players are the highest paid athletes in professional sports. But for the many skilled professionals who haven't quite made it into the NBA, the financial gulf is huge. 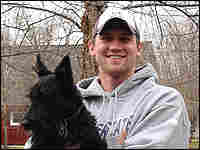 Lance Allred plays for the Idaho Stampede in the NBA Development League. He says his dog, Mack, helps him to relax and forget about the capriciousness of the NBA basketball draft. Tom Goldman, NPR hide caption

With an average annual salary of more than $5 million, NBA players are the highest-paid athletes in professional sports. But for the many skilled professionals who haven't quite made it into the NBA, the financial gulf is huge.

Lance Allred is one such player. He plays in the NBA's top minor league.

"It blows your mind, because yeah, you see guys that I played against and you know you can play against, and they're making an obscene amount of money," he says.

In college, Allred went head-to-head with players like Andrew Bogut. The two were evenly matched in points and rebounds. Bogut, an Australian, remembers how they competed in 2005 for the NCAA Men rebounding title. Bogut finished second and Allred, third. But today Allred plays for a minor league team, and Bogut is the starting center for the Milwaukee Bucks, where he routinely battles the likes of Shaquille O'Neal and Tim Duncan.

"I always loved the way he played. He played very hard every day," Bogut says of Allred. "I think he was one of the best players in that conference at that time."

Regardless, the Bucks crowned Bogut as the best player and picked him first in the NBA college draft. He makes $4.6 million a year. Allred, on the other hand, was not one of the 60 players drafted. He now plays for the Idaho Stampede in the NBA Development League. The league is considered the closest to the NBA, but his paycheck doesn't reflect that fact.

Salaries in the development league range from $12,000 to $24,000 a season, paid in part by money from the NBA. Due to such modest salaries, some Idaho Stampede players share an apartment in Boise. Jermaine Blackburn and Ronell Taylor's three-bedroom apartment is a testament to lives spent on the move. The white walls are completely bare. The focal point of the room is a huge television set where they spend most of their down time playing video basketball games. The team covers apartment rent and utilities. Blackburn and Taylor pay for their groceries and the monthly $40 charge for leasing a washer and dryer. Taylor, a 24-year-old guard from Alabama, says they split all costs down the middle.

Life on the road presents further financial challenges. While traveling, NBA players are given $100 a day as spending money. Players in the Development League are given $30. That means meals are often limited to fast-food restaurants like McDonald's.

The players talk about money and lifestyle in a matter-of-fact way. They don't complain. Many could be earning more money in Europe, but they know that the NBA often turns to players in Development League towns like Boise, Sioux Falls, or Bakersfield when they're in a crunch.

Team Spirit in the Development League

With talent scouts constantly on the lookout for excellent individual performances, Development League team coaches often have a difficult time teaching unselfish, team-oriented basketball. Bryan Gates coaches the Idaho Stampede. During a game against the Bakersfield Jam, he urges his huddled players not to let up.

Coach Gates is successful in pulling the team together, and they win the game. In his post-game speech, he acknowledges the collective quest in the Development League to move up to the NBA.

One particular player on the team is a constant reminder of that desire. Eddie Robinson played for the Charlotte Hornets for two years before signing on with the Chicago Bulls. That contract paid him $32 million a year. At the age of 24, he was set. He did what many instantly rich players do: bought his mom a house, bought himself a silver Bentley, and built a gym for underprivileged kids back in his hometown. He hired a financial team that Robinson says also invested his money and put him on a budget of $1,000 a month.

"That's after all my bills are paid. I have like that much money to do anything with," he says.

But in 2004, Robinson broke his foot. He's been out of the NBA since then trying to heal. His comeback attempt has brought him to the Idaho Stampede, where he's become a kind of basketball Yoda to his teammates. He imparts wisdom about life in the NBA and about the winner-take-all economics at the top level. He doesn't need the salary he makes in the development league, so he sends it all to his family in Michigan.

"I'm not really here for that – you know – financial money," he says. "I mean, I love playing basketball and... this is the league that's going to get me back to the next level."

Because so many players feel the same, the competition is fierce to make it into the Development League, despite the paltry money. Lance Allred remembers pre-season tryouts for the Stampede, when bad shoes literally ripped the skin off the ball of his foot.

"But it's camp, and you're not guaranteed, so you got to keep playing on it. So you just put some Neosporin on and wrap it up and just rub some dirt on it and bite the bullet and go back out there," he says.

Allred is propelled by the allure of the NBA jackpot, which is more lucrative than ever. As the NBA aggressively courts overseas markets, revenues and payrolls stand to grow even more.