Accessibility links
Ex-Mayor Rudolph Giuliani (NY) For much of last fall, former New York City Mayor Rudolph Giuliani led his rivals for the GOP nomination in third-quarter fundraising in 2007, and also led the pack in national polls. But those poll numbers have plunged remarkably quickly, as has his fundrasing. 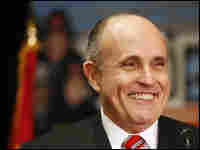 For much of last fall, former New York City Mayor Rudolph Giuliani — "America's mayor" — also seemed well-positioned in his bid to become America's next president. He led his rivals for the GOP nomination in third-quarter fundraising in 2007, and also led the pack in national polls. But those poll numbers have plunged remarkably quickly — a reflection of his weak finishes in the early voting presidential contests held so far.

Not that he focused his efforts on those states. Instead, Giuliani has long pinned his presidential bid on an unconventional strategy: Win Florida's delegate-rich primary on Jan. 29, then let the momentum carry him through to victory in other delegate-rich states where he is well known — New York, New Jersey and Connecticut — voting on Feb. 5 (Super Tuesday). That strategy took a hit recently when the editorial board of The New York Times decided to endorse rival GOP hopeful Sen. John McCain of Arizona. The same editorial described Giuliani as "a narrow, obsessively secretive, vindictive man."

But the bigger obstacle Giuliani faces is that, despite spending much of his time and money campaigning in the Sunshine State, his lead there has disappeared, and he now trails in the polls. The state's primary looks less like his catapult to the nomination than the site of his possible last stand. As his poll numbers have dropped, so has his fundraising: In January, some top campaign staffers gave up their salaries — a strong indication that he's running out of cash.

Giuliani earned the gratitude of a shaken nation after his resolute and reassuring performance as mayor of New York City in the wake of the terrorist attacks of Sept. 11, 2001. He was on the world's television screens, trudging through the ash and smoke, organizing the emergency response and declaring, "I want the people of New York to be an example to the rest of the country, and the rest of the world, that terrorism can't stop us." He was given an honorary knighthood by Queen Elizabeth. He was Time magazine's Person of the Year for 2001.

For much of his campaign, Giuliani made national security the cornerstone of his candidacy, calling for the nation to go on the offensive in what he calls "the terrorists' war on us." He has also touted his record of fighting crime in New York, first as the U.S. attorney there, then as mayor for eight years, during which time the crime rate was cut in half. And he has said that the wants to adapt the computerized crime-tracking system used during his administration to combat illegal immigration. Recently, as the troubled U.S. economic has emerged as the top issue for voters Giuliani has switched focus, emphasizing his role in strengthening New York City's economy over his record on handling Sept. 11.

While that record may appeal to conservatives, Giuliani's positions on social issues may not. He supports abortion rights, gun control and domestic partnerships for gay couples. His personal life also makes many social conservatives uneasy.

Giuliani has been married three times. The break-up of his second marriage was a feast for the New York tabloids, when he announced he planned to leave Donna Hanover at a press conference. Giuliani and Judith Nathan were married in 2003.

His actions in the aftermath of the Sept. 11 attacks have given Giuliani near-universal name recognition. But his record on national security has some question marks. He was originally a member of the Iraq Study Group (also known as the Baker-Hamilton commission), but failed to attend meetings. His financial disclosure forms show he was attending paid speaking engagements instead. He eventually resigned.

And in 2004, Giuliani recommended his former police commissioner, Bernard Kerik, to be the director of Homeland Security. The Bush administration nominated Kerik for the position, only to be embarrassed when it was revealed that Kerik had taken tens of thousands of dollars in gifts when he was a city official. Kerik later pleaded guilty to two criminal counts and is still under federal investigation. Giuliani has called his recommendation of Kerik a mistake.