Accessibility links
Faith Could Be Hurdle in Romney's White House Bid Former Massachusetts Gov. Mitt Romney is campaigning for the GOP nomination for president. But his Mormon faith could make it harder for him to win the support of evangelical Christians, a group seen as key to winning the nomination.

Listen
Faith Could Be Hurdle in Romney's White House Bid 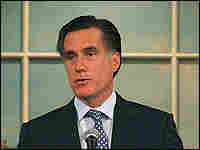 Former Massachusetts Gov. Mitt Romney will have to win over some voters who are uncomfortable with his Mormon faith. Getty Images hide caption

Percentage of 1,321 respondents who said they could NOT vote for the following presidential candidates because of religion:

Percentage of 1,489 registered voters surveyed who could NOT vote for one of the following, even if they were presidential candidates nominated by the respondents' party and even they and the respondents were in general agreement on most issues:

Percentage of 864 registered voters surveyed who would NOT vote for the following for president even if they were qualified for the job and nominated by the respondent's party:

Percentage of 1,006 adults who said they were very uncomfortable or have some reservations about voting for a presidential candidate who is:

Percentage of 1,005 adults who said they would be less likely to vote for a candidate for president who is:

Percentage of 900 registered voters who said they would be less likely to vote for a candidate for president who is:

Percentage of 900 registered voters who said they be less likely to vote for Mitt Romney because he's a Mormon: 24%

Source: Compiled by NPR from searches of the iPOLL Databank provided by the Roper Center for Public Opinion Research, University of Connecticut.

"People in this country want a person of faith to lead them as their...president," Romney said on Fox News Sunday last year. But he bristles when his particular faith attracts attention, as it did in 1994, when he tried to unseat Massachusetts Sen. Edward Kennedy.

"I am not here to run for cardinal," Romney said at the time. "And I'm not going to get into discussions about how I feel about all my church's beliefs and my church's doctrines... All that does, in my view, is play into religious bigotry."

Faith an Issue Among Evangelical Voters

Romney is back on the campaign trail as a Republican candidate for president - he officially announces on Feb. 13 - and his Mormon faith is right along with him. His membership in the Church of Jesus Christ of Latter-day Saints comes up often in interviews and polls. And it's a significant issue for evangelical Christians, who are considered key to the Republican nomination for president.

"There's a special tension with Mormonism, because probably two of the more aggressive evangelistic faiths in America are Southern Baptists and Mormons," notes Richard Land, president of the Southern Baptist Convention's Ethics and Religious Liberty Commission.

Land says that the Mormons' missionary zeal puts them in direct conflict with the missionary efforts of his church.

"Everyone acknowledges that Judaism is not a Christian faith," Land says. "Yet, most Southern Baptists had absolutely no problem with an observant Jew running for vice president." He adds: "The difference [between Judaism and Mormonism] is that Judaism is not an actively evangelistic faith."

Mitt Romney has been courting Southern Baptists and other evangelicals, hoping he can get them to look beyond religion and see him as the only viable social conservative seeking the Republican nomination for president.

During a January swing through South Carolina, Romney emphasized his executive competence: as a successful venture capitalist, as the man who rescued the scandal-plagued Salt Lake City Olympics, and as a governor who tackled a billion-dollar budget deficit.

But Romney's Mormon faith appears to be a significant hurdle. Six national public opinion polls (see sidebar) conducted since June 2006 found that a significant number of respondents are less likely to support a Mormon candidate for president. Fourteen percent of respondents in a December Los Angeles Times/Bloomberg survey said they wouldn't support a Mormon candidate, even if they were in general agreement with that candidate on most issues. More than half of the respondents in a December Wall Street Journal/NBC News poll said they'd have some reservations or be very uncomfortable about supporting a Mormon candidate.

Some of the resistance — from both the religious right and the secular left — stems from concern that, if elected, Romney would promote the Mormon Gospel and do the bidding of the Mormon prophet.

Romney has tried to allay the fears of those who can't see beyond his Mormon religion. Referring to a speech by Abraham Lincoln, Romney said on Fox News, "America has a political religion, which is to place the oath of office, an oath to abide by a nation of laws and a constitution, above all others. And there's no question that I make that my primary responsibility."

Politics Not Always in Line with Faith

In fact, Romney has already taken political positions that seem to conflict with the stated positions of Mormon leaders. In 1994, during his campaign for the Senate, Romney showed support for both abortion and gay rights. He took a decidedly pro-choice stance when he served as the most senior Mormon official in the Boston area. He also supported an Indian casino in Massachusetts, despite his church's steadfast opposition to gambling.

"In the past, [Romney] has distanced himself from some official [Mormon] Church positions on some social issues," says Ron Scott, a fellow Mormon and Boston-based journalist writing a book about Romney's courting of the religious right. "In doing so, he's shown his ability to act independently of them."

"The suggestion that a Mormon leader would dictate policy to a President Romney is absurd," says Mike Otterson, the spokesman for the Church of Jesus Christ of Latter-day Saints. "I can't imagine any president that would allow that."

Romney still has a ways to go before he can completely assuage conservatives that his ideological conversion is sincere. But the Southern Baptist Convention's Land believes Romney can still win over evangelicals: "He can overcome the Mormon part of it. It's not a deal killer...if he proves that he's the most viable social conservative candidate."

Land offers this perspective on Romney's candidacy: "I'm not electing a pastor-in-chief. I'm electing a commander-in-chief."