Accessibility links
On the Trail of the Death Cap Mushroom The death cap is the most common cause of deadly mushroom poisoning in the United States, and the fungus is spreading like crazy in California. Biologist Anne Pringle is investigating a death cap hotspot, and in the process, trying to secure her career at Harvard.

Listen
On the Trail of the Death Cap Mushroom 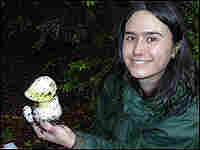 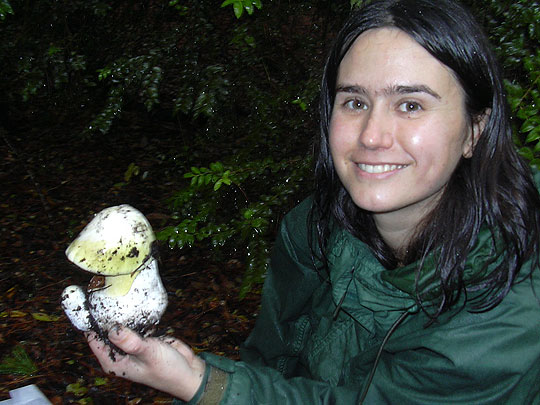 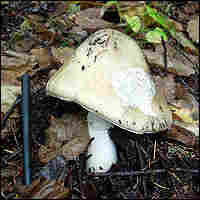 The Amanita phalloides, or death cap mushroom is the most common cause of deadly mushroom poisoning in the United States. Ben Wolfe hide caption 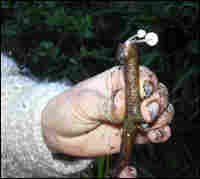 Pringle shows one of the many new species of mushroom she and her research team discovered in Point Reyes. Pringle says 95 percent of the fungi in the world have yet to be identified. Richard Harris, NPR hide caption 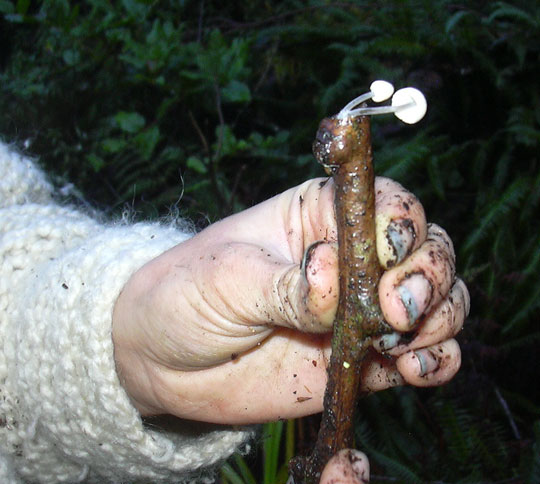 Pringle shows one of the many new species of mushroom she and her research team discovered in Point Reyes. Pringle says 95 percent of the fungi in the world have yet to be identified.

Portrait of a Death Cap

POISON: Ingestion of death caps account for as many as 90 percent of mushroom poisoning deaths worldwide.

HISTORY: The death cap is not native to the United States. Harvard biologist Anne Pringle and other scientists believe it came from Europe, traveling to California among cork or oak tree seedlings.

WHERE: In the United States, death caps are found in the West Coast's cool coastal regions, but it also grows in the mid-Atlantic coast and in the northeast.

APPEARANCE: The mature death cap usually is metallic green but can vary from light yellow to greenish-brown. The death cap can easily be mistaken for nonpoisonous species as it is not distinct in appearance, taste or smell.

METHOD OF ATTACK: The toxins found in the death cap block the production of DNA, which causes cell death — especially in the liver and kidneys.

SYMPTOMS: Initial symptoms of death cap poisoning appear 6 to 24 hours after ingestion. Because of this delayed onset, many patients do not associate the symptoms with eating wild mushrooms. For 12 to 24 hours, the patient will have abdominal pain, nausea, vomiting and diarrhea. Drinking fluids may ease the symptoms, and many mistakenly assume that the danger has passed. However, the toxins continue to attack the liver and kidneys, which can lead to coma, organ failure, and possibly death.

NO KNOWN TREATMENT: Treatment with fluids can help alleviate the initial symptoms, but there is no known cure for death cap poisoning. Death occurs in 20 percent to 30 percent of all known cases, and in more than 50 percent of cases for children under 10 years old.

Last month, a California woman died and five family members fell seriously ill after eating mushrooms they had picked in the woods. Health officials believe the culprit was the death cap mushroom, the most common cause of deadly mushroom poisoning in the United States.

Biologist Anne Pringle is trying to understand why the death cap mushroom is suddenly spreading like crazy in California.

Pringle has just begun her career at Harvard University. It's a wonderful first job because it lets her follow her passion for fungus. It's also a huge challenge.

When Pringle moved from a post-doctoral fellowship at Berkeley to a Harvard professorship in the fall of 2005, she created an unusual bi-coastal relationship. Her husband, David, and two young daughters came with her to Massachusetts, but the fungus that holds her fascination stayed behind in California. So in December, she spent one last evening with her family before heading west for a weeklong visit.

Fungus has clearly crept into the fabric of this family. Even 3-year-old Penelope has developed a rather sophisticated knowledge of mushrooms. She can identify mushrooms printed on her placemat — the black trumpet — and has a favorite, boletes.

But Penelope says she hates to eat them, which is probably just as well, because many of the mushrooms this family goes out to the woods to collect are deadly.

Pringle's destination — Point Reyes National Seashore in California — is a hotspot for the rapidly spreading death cap mushroom, Amanita phalloides. Pringle hasn't yet been able to raise any grant money for her research into this runaway species, so she is traveling on the cheap, staying in a youth hostel and bedding down in bunk rooms with her postdoc assistant Franck Richard and graduate student Ben Wolfe.

Staying at the hostel does have a benefit. The hostel manager lets Pringle turn the dining room into a lab. They've set up a microscope, laptops and a mushroom dryer.

Not long after her arrival at the hostel, Pringle and her research team are off to look for mushrooms. They head out along a path lined with bay laurel trees, sword ferns and oaks dripping with nets of lichen.

Tomales Bay, a narrow crease formed by the San Andreas Fault, peeks through the rain-soaked foliage.

It's not long before Pringle spots mushrooms.

"They're not just any, they're phalloides," she says.

She kneels down to look at a fist-sized death cap mushroom. It's white with a tinge of green, sitting in a fleshy cup in the ground. Around the stem is a ring.

Mushrooms seem like such an obscure thing to get passionate about, but clearly Pringle is.

"It's a challenge to study something that's so different from you because, you know, a fungus is not a human, it's not an animal," she explains. "And it doesn't act the same way, so you really have to think hard and challenge your assumptions about everything that it's doing. It's a challenge and it's really appealing to me."

Recently, Pringle did some fancy detective work with old books and newfangled DNA techniques to prove that the death cap mushroom is actually an invader from Europe. It was inadvertently brought here on the roots of imported trees many decades ago. Now that it's spreading like crazy, Pringle is trying to figure out what native species it might be crowding out in the process. Truth be told, scientists think they haven't even identified 95 percent of the fungi in the world, let alone what's growing in California.

As if to prove this point, Pringle rounds a corner on the trail, coming across her postdoc, Franck Richard, belly down in an alder swamp.

He's ecstatic. Richard's lab back in France studies fungi that only grow in alder patches. And here, on Point Reyes, he finds something similar to the European species but clearly different. In fact, it's a species unknown to science.

Pringle and grad student Ben Wolfe join in the hunt, and with little effort they find eight new undiscovered species. One looks like a small gray potato, another is luminous white.

"It's like an Easter egg hunt every day," she says.

The rain comes in squalls as Pringle's team fans out across their study area. This is good. Fungi usually live invisibly underground, with threads slinking through the soil. But rain coaxes the fungus to sprout mushrooms. Oddly enough, mushrooms are really umbrellas, she says, providing shelter for the spores that hide under the cap. Those spores have to stay dry. Fortunately, we don't.

Pringle's job today is to collect some of the invading death caps. But as she heads up the trail, she spots a russula mushroom in the undergrowth.

"These are fun mushrooms. If you throw them against a tree, they'll smash into a million pieces. They're brittle like crackers," she says. Russula-smashing is one of her daughter Zoe's favorite activities.

Mushrooms typically rely on plants as partners and they usually play fair with their hosts. They bring the trees nitrogen and take some carbon in return. But Pringle wonders whether the death cap is breaking that rule. One hypothesis is that it is doing so well in California because it has found a way to cheat the oak trees it lives on. The fungus could be taking nutrients without giving anything back.

She plunges a trowel deep under the soil to collect the tree roots as well as the mushrooms.

"Look, wow, the earthworms are going nuts," she says. "He's like, 'That was my home, but you took it away.' It's like James and the Giant Peach."

She handles the mushroom so casually, it's startling to think that just a small piece of this is enough to melt a person's liver and kill him.

"It's not a pleasant death," she says.

Pringle admits that the creepy aspect of the death cap mushroom is part of the allure.

"It is, of course, fun that there's such a deep cultural history associated with this mushroom. You know, you can read about this emperor who was poisoned by eating an Amanita phalloides, or people tell you that it smells like death," she says. "People are fascinated by this mushroom, the fact that it kills you. There's no denying that."

Pringle says some of her friends object when she uses the word "charismatic" to describe the mushroom.

"They say I should use the word 'notorious,' which is fair enough. But I actually find it charismatic."

As the day progresses, Pringle's fingernails get dirtier and she becomes more absorbed in the damp embrace of the world around her.

She comes across some odd insect eggs, and inadvertently gets some in her hair.

Not even a Harvard professor's family gets a pass on that undiscriminating pest.

"But, you know, the girls were really excited about their head lice in the end because we identified all stages of the life cycle, and we could do little experiments with the head lice and hair and the water and see the head lice swim to the hair and cling to the hair. It was pretty funny."

Then, suddenly the conversation turns serious. Just because kids are naturally curious, that doesn't automatically mean they're destined to follow their mother's footsteps.

"I don't want my kids to be scientists," Pringle says. "Not unless they really want it. It's hard, you know, I don't think you should do it unless you feel really passionately about what you do. And if they feel passionately, then that's OK. But I am not going to push them in this direction."

Much as Pringle loves what she does, she does feel the pressure of her young scientific career. In about five years, Pringle will be asked to write her own job description. Harvard University will then advertise that job. And if she's judged the best applicant, she'll get tenure. Otherwise, it will be time to move on.

"I talked to a group of undergraduates the other day, and as far as they were concerned, I'd made it," she says. "I had my job, my life was set. It was interesting to have that conversation, because I started to tell them this is the most dangerous time of my career, this time between having a job and getting tenure. So, this is really like flying blind in lots of ways."

But in the end, tenure and career advancement aren't foremost in her mind.

"I don't care so much about those things. I care about finding important problems and solving them," she says.

And, here, digging up death caps in the dripping California woods, she's doing just that.