Los Angeles has plenty of home-grown gang bangers. But many of them have connections South of the border — in Mexico and Central America. That's why authorities from those countries are now in L.A. for a three-day gang summit led by Los Angeles Police Chief William Bratton.

Wednesday, Bratton welcomed his counterparts from Mexico, Central America and Canada. For the first time, they're sharing intelligence on violent street gangs. The FBI's Steven Tidwell says it's part of a new effort to track transnational gang bangers.

"They're deported from here and they start their post graduate studies down there, they bounce back to us, we're gonna have to really make sure how we are managing the intelligence on them."

One of their targets is the Mara Salvatrucha, the MS-13 gang, which reportedly has tens of thousands of members in the U.S. and Latin America. The gang started with young Salvadorans who escaped civil war in the 1980s and fled to L.A. barrios. Members of the MS-13 gang are routinely deported to El Salvador, where police have reacted with what's known as the "Mano Dura" — the Hard Hand approach. Gang interventionist Susan Cruz says there were random roundups and frequent cases of police brutality against anyone sporting gang tattoos.

"In El Salvador — every now and then you, have death squads you know that come around. Same thing with Guatemala," Cruz said. "So if anything I would like to see the U.S. law enforcement try to remind their Central American counterparts what law enforcement means — and that also means not killing people."

Rodrigo Avila is director general of the National Police in El Salvador. He says tactics have become more sophisticated. For example, police in the U.S. are sharing fingerprints and other information on deported gang members.

"Now we're arresting them with a lot of evidence, technical and scientific evidence," Avila said. "And we're getting a lot of convictions."

Avila and other Central American police chiefs planned to ride along with L.A. cops Thursday as they toured gang territories. And Chief Bratton will launch his own anti-gang plan for the city. That includes the controversial step of identifying L.A.'s worst gangs in what amounts to a top-ten list.

"A major part of what we're trying to do is remove the mystique or the veil of secrecy about gangs, and lay them out for what they are," he said. "Who they are and what they're doing."

Listing the gangs — there are actually 11 on Bratton's list — is a departure from past policies that discouraged anything that might glorify gangs by name. Some gang members themselves say making that list would be a badge of honor.

A 17-year-old member of the San Fer gang in Sylmar says the list will have the opposite impact of what police want.

Los Angeles Cracks Down on Gangs, Once Again

Los Angeles Cracks Down on Gangs, Once Again 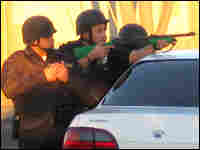 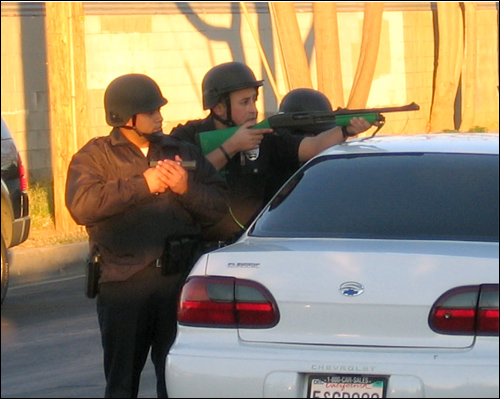 Police surround the home of a suspected gang member in the San Fernando Valley, where gang violence shot up 44 percent last year. 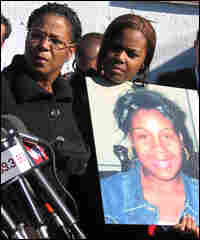 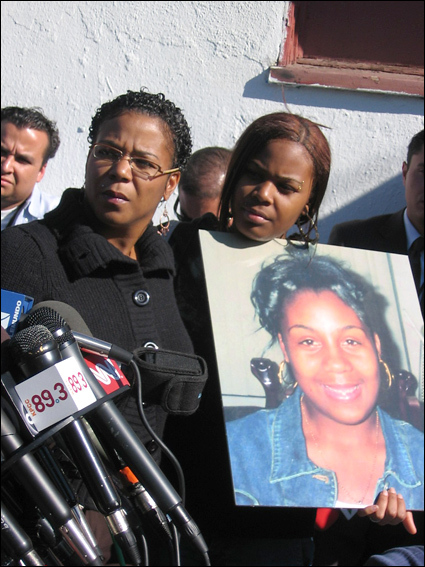 Family members hold up a photo of 14-year-old Cheryl Green, who was reportedly shot and killed by Latino gang members in the Harbor Gateway neighborhood. 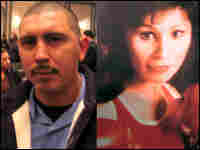 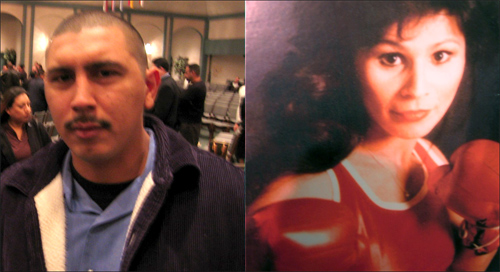 Gilbert Alvarado (left) says Lilly Rodriguez lured him away from gangs by teaching him to box. Rodriquez died of an illness last year.

At daybreak in Los Angeles, a dozen police officers surround a one-story home in the working-class neighborhood of Pacoima. They aim their guns and rifles and call out to a suspected gang member: "Come out through the front door with your hands up."

Eventually, the suspect's mother comes out, holding back four pit bulls. Then his sister, pushing their grandmother in a wheelchair. Finally, police escort a 17-year-old boy, in handcuffs. The officers arrest him for threatening a classmate in their high school parking lot. Detective Dave Peteque says he's a member of a local Piru gang.

"Our suspect pulls out a gun, points it at him and basically says 'I should f-in' kill you right now, but there's too many witnesses around. But I'll catch up with you,'" Peteque says.

Police say such arrests are typical here in the San Fernando Valley, where gang-related crime shot up 44 percent last year. Lt. Thomas Zack says the biggest increase is among 12- to 15-year-olds.

"The gang members are getting younger they're more brazen," he says. "And they find it necessary to commit more violent acts to achieve notoriety and demand respect."

"I cannot tell you the number of examples I have of victims telling me they've heard the suspects, one to another, say, 'You don't get to go into the gang unless you kill someone.'"

Derek Thomas, 21, says he and other African-Americans don't dare cross into the Latino gang territory — not even to shop at the only market for miles.

"Certain streets you can't go on, stores you can't come to, otherwise you're gonna get harassed," Thomas says. "I came down here to this store as a young boy, and they told me not to come back. From then on, I never came back."

Last week, activists and neighbors, including Thomas, signed a pledge to cool black and Latino tensions. But none of the gang-bangers who reputedly terrorize the area showed up. At the same spot a few hours later, L.A. Mayor Antonio Villaraigosa announced: Enough's enough.

"No one should have to fear for their life because of the color of their skin," the mayor said. "So we have a message for the gang leaders. We're coming with everything we have. And we're putting you out of business."

Villaraigosa brought a platoon of enforcers, including the FBI director, who pledged federal intelligence and surveillance aid. And City Attorney Rocky Delgadillo promised to arrest known gang members seen in public together.

"We have to be tougher and smarter," said Delgadillo. "We are going to look to using all of our tools to fight the gangs in this community."

L.A.'s war on gangs has gone on for decades. In the 1990s, the police department's special gang units got caught up in their own scandals: stealing evidence, and shooting and framing innocent people. Since then, Chief William Bratton, says, the police approach to combating street gangs has been piecemeal.

"We've been all over the place for many, many years," he admits. "This city, this county, this region of the country needs to show leadership, because we created the gang problem right here. It was born and raised and is thriving here."

"The bottom line is, we've locked up over 450,000 young people under the age of 18 in the last 10 years," Rice said to the City Council's ad hoc committee on gangs. "We've spent billions and billions of dollars on everything that you can think of in suppression. We have targeted everything from the tattoos to the shootings. And after $80 billion, we've got six times as many gangs and twice as many gang members. Suppression alone is not enough."

Rice proposes that schools stay open until 9 p.m., and parks until midnight, for after-school tutoring and nighttime sports. And she suggests that a new "Gang Czar" could coordinate gang intervention and prevention programs.

Karen Carter and Vicky Lindsay, whose sons were killed by gang members, urged the city council to approve the recommendations. "When we go home, we're locked inside but we're still in a war zone," Carter said. "We are afraid." Lindsay added, "We live with this every single second, and it hurts. So whatever plans you guys have, just put it in motion, 'cause we're hurtin'."

He's afraid for us to use his real name, saying he's been locked up five times for things like armed robbery and resisting arrest. He's just been kicked out of Sylmar High for what he calls "causing drama." He says it doesn't matter how hard police come down.

And there's nothing anybody can do about that?

"I mean I can change personally," he continues. "But that's not gonna stop a thousand other gang members from changing. They're gonna continue doing what they do, til they're dead or in prison."

He says getting out of his gang won't be easy. To join, he had to suffer a beat-down by his homeboys. If he leaves, he says, they may kill him.

Just last week, Los Angeles lost a prominent gang interventionist. Lilly Rodriguez, a former kickboxing champ, crusaded for years with her husband, Blinky, to help kids leave behind "la vida loca"-- the crazy gang lifestyle. She died battling disease. At a crowded church auditorium in Van Nuys, thousands of relatives and friends gathered in her memory. Among them was Gilbert Alvarado.

"I met her about 10 years ago, when I was a little kid running around in the streets," Alvarado says. "She just changed my life. She really did."

Rodriguez inspired Alvarado to leave the Project Boys gang 10 years ago, when he was 16.

"Man, she helped a lot of guys like me in gangs," he says. "She'd teach them boxing as a way out of the gangs. 'C'mon,' she said,' I'll show you how to fight.' To her last day, she was trying to help me out. 'Gilbert,' she said, 'I believe in you, mi'jo.' I never had nobody show me that affection, that love."

Alvarado suggests that unconditional love and patience — from parents and police — is what it really takes to counter gang life. But that's something you may not find spelled out in any official anti-gang playbook.