Accessibility links
Iraq and the Senate: A Lot of Talk, No Debate Despite failing to gather enough votes to debate an Iraq resolution on Monday, senators are still talking about what comes next. But so far, colorful and sometimes accusatory rhetoric has failed to break the impasse.

Listen
Iraq and the Senate: A Lot of Talk, No Debate

Despite failing to gather enough votes to debate an Iraq resolution on Monday, senators are still talking about what comes next. But so far, colorful and sometimes accusatory rhetoric has failed to break the impasse.

And NPR's David Welna was listening.

DAVID WELNA: It's more scrimmage than showdown. Still, the Senate debate on Iraq plowed ahead even without a vote slated to decide who wins and who loses. The debates have the tone of a grudge match. Each side accuses the other of having derailed the debate, even as they debate.

HILLARY CLINTON: We cannot get the Republicans to allow us to take a symbolic vote to condemn the escalation, much less a real vote to stop it.

WELNA: Majority Leader Harry Reid was also was dismayed, though not enough to stop him from trying to pull the plug on the Iraq debate, at least for now.

HARRY REID: I'm terribly disappointed that we haven't had the opportunity to vote on Senator Warner's, Senator Levin's resolution, and on the McCain resolution. But we've heard enough about that. We're not going to be able to do and we'll move on to other things.

WELNA: But minority Leader Mitch McConnell was determined to portray Democrats as stifling the much-awaited debate and was not about to move on.

MITCH MCCONNELL: I'm disappointed, as other members of my party in the Senate are disappointed, we're not having the Iraq debate this week.

WELNA: Evidently, those other Republicans had changed their minds since Monday. The day McConnell said this.

MCCONNELL: There are many members on my side who would argue that we shouldn't be having this debate this week at all.

WELNA: If this seems confusing, take some advice offered yesterday in the Senate by the number two Republican, Trent Lott.

TRENT LOTT: This is the Senate, you know. You've got to give everybody their chance. You've got to have some order out of the chaos. This is sort of like Baghdad; sometimes we get divided up into provinces.

ARLEN SPECTER: It would be my hope that there would be a public understanding of what we are doing.

WELNA: Specter said it's not only relatives watching C-Span who have a hard time grasping the Senate's rules.

WELNA: But the Senate standoff is really quite simple, according to New Hampshire Republican Judd Gregg. He says Democrats won't allow his rival resolution because it only says the Senate won't reduce funding for troops in the field.

JUDD GREGG: We're not having a vote because more people would vote for my amendment than would vote for their amendment. And they don't want to embarrass their membership by asking them - by having to have them vote for my amendment. Even though it is so - there's nothing controversial about it, unless you consider supporting troops in the field, giving them what they need to fight and defend themselves, to be controversial.

We are being held hostage by a convoluted resolution that is not the issue of the day.

MURRAY: I am happy to take a vote on that. But I am not happy to have a resolution pass out of the Senate and the only thing we say is that we support our troops, and we never have an opportunity to send the president of the United States a message about the surge and whether or not we support it, which is exactly what the Gregg amendment is designed to do.

WELNA: So the impasse continues to the dismay of Kansas Republican Pat Roberts.

PAT ROBERTS: We appear like lemmings, splashing in a sea of public concern, frustration, and anger over the war in Iraq.

WELNA: Last night, seven Republicans who back the anti-troop buildup resolution declared the Senate stalemate unacceptable and vowed they'll force a vote on their measure, the same one five of them voted on Monday to block.

The Senate on Iraq: Profiles in Calculation 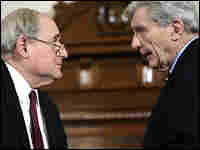 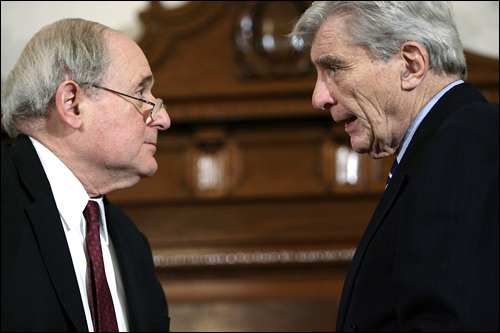 Here's an old lesson about the Senate that we learned anew this week: You can build a bridge between the two parties, but you can't make either one cross it.

In this case, the divide is especially wide because the issue itself is grave and the political stakes could not be higher. The continuing war in Iraq is the issue, the unavoidable question in American public life — and already the key to the presidential election in 2008.

It has been nearly four years since the U.S. invasion of Iraq, and in that time the Senate has not come to grips with the deteriorating situation there. Nor has it held a formal debate on whether the war should continue.

Now, with the Democrats back in the majority and President Bush pressing for more troops, that debate has become inevitable. But how will it take place? What will be the question before the Senate? What will be the measure of the outcome?

Last week, two senior senators put together a resolution that did two things: It disagreed with the president's troop buildup, and it promised not to cut off funds for the troops that are there. It was the joint product of Republican John Warner of Virginia and Democrat Carl Levin of Michigan, the former and current chairs of the Armed Services Committee.

They knew the issues, and they knew and trusted each other. They also knew what their respective parties needed most — and feared most — in any floor debate on Iraq.

Republicans need a way to distance themselves from a war that has already cost them control of Congress, and threatens to cost them the White House in 2008. At the same time, they need to stay as loyal as possible to their president. Sen. John McCain touched a nerve when he called Warner-Levin "a vote of no confidence" in the Bush administration.

For their part, Democrats need to respond to the voters who put them in the majority last November — and who did so largely because of misgivings about Iraq. Their best chance to do so may be to strike at the president's policy at its weakest point: Polls show that about three in five Americans oppose higher troop levels in Iraq.

But Democrats are also fearful. They remember their own electoral losses of 2002 and 2004, when the Republicans gained Senate seats as the warriors of the War on Terror — the party that stood with the troops. That contrast defeated Democrats, even though more than half the Senate's Democrats had voted for the war, and nearly all were lining up to fund it.

As soon as talk of abandoning the troops in the field gets started, the typical Senate Democrat starts seeing flashbacks.

These, then, are the calculations that motivate senators. Given the right circumstances, these calculations could add up to support for a balanced resolution, much like Warner-Levin. For a time last week, it appeared that these two men's compromise resolution would garner the 60 votes needed to invoke cloture and proceed to a formal debate and vote.

But that's when the Republican leadership dug in its heels. Loyal to the White House, Senate Republican Leader Mitch McConnell and his chief deputy, Trent Lott, devised a strategy that used the political calculations of various senators against Warner-Levin.

McConnell and Lott suggested that if the votes were there for cloture on Warner-Levin, then the Senate should consider several rival resolutions in the debate that followed. And, they said, just to put everyone on an equal footing, each of those resolutions should require 60 votes for approval.

That gave the Republican troops a fairness argument to make on the floor, even if it was hard to think of a previous debate on a similar measure that was handled in this unorthodox manner.

"Everyone knows it takes 60 votes to do anything in the Senate," said Sen. John McCain on the Senate floor. And surely that is the mantra for all and sundry discussions of Senate procedure that include the need for cloture.

But once cloture is invoked, the required margin for approving a simple resolution is usually a simple majority — unless a budgetary point of order can be brought against it.

But McConnell and Lott knew perfectly well that the Warner-Levin measure – while it may have had 60 votes for cloture – probably lacked that same number for approval. And the reason was a particular reluctance on the part of certain Democrats, not Republicans.

Several of the Democrats ready to vote for cloture (to bring the resolution to the floor for full consideration) were not eager to vote for the resolution itself. They included Russ Feingold of Wisconsin, a longtime war opponent, and Christopher Dodd of Connecticut, a second-tier entrant in the 2008 presidential sweepstakes.

These Democrats wanted the debate to happen, but they did not want to be tied to that part of Warner-Levin that permanently ruled out a cutoff of funds. Unlikely as such a cutoff may be, these senators did not want to foreclose the possibility forever and grant carte blanche to the president.

It seems that Senate Majority Leader Harry Reid was hoping to open the cloture gateway with one bipartisan super-majority (maybe 49 Democrats and a dozen Republicans) and then approve the actual Warner-Levin resolution itself with just a simple majority (including several fewer Democrats).

This was the Democratic maneuver McConnell and Lott were out to thwart. They said any resolution had to get 60 votes or it was no deal. And when denied that arrangement, they got all but two of their Republican colleagues to stand with them and vote against cloture. The party discipline of the new minority was impressive. Even Warner voted with his leaders. So did outspoken Republican war critic Chuck Hagel of Nebraska.

And so, the two parties remained in stasis on the issue Americans care most about.