Accessibility links
Lewis Libby's Complete Grand Jury Testimony The judge in the federal perjury and obstruction of justice trial of I. Lewis "Scooter" Libby has released to the public eight hours of recorded testimony Libby gave to a grand jury in March 2004. 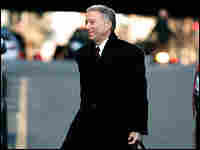 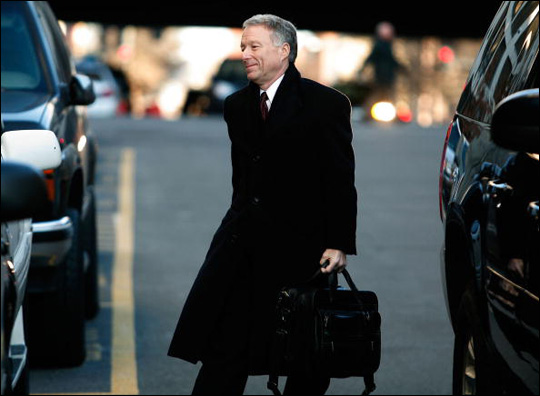 The judge in the federal perjury and obstruction of justice trial of I. Lewis "Scooter" Libby has released to the public eight hours of recorded testimony Libby gave to a grand jury in March 2004.

Libby, the former chief of staff to Vice President Dick Cheney, is accused of covering up his involvement in the release of undercover CIA employee Valerie Plame's name to the media.

Plame's husband, former ambassador Joseph Wilson, was a public critic of the Bush administration's claims that Iraq had attempted to obtain uranium in Africa. The president included that claim in his January 28, 2003, State of the Union address. But the previous year, Wilson had traveled to Niger to investigate those claims and found that they were unsubstantiated. On July 6, 2003, The New York Times published an op-ed written by Wilson. In it, the former ambassador said that the vice president's office sent him on the mission; he also accused the administration of "twisting the facts."

Prosecutor Patrick Fitzgerald alleges that Libby lied to the grand jury and to the FBI about how he learned of Plame's identity, and about whom he told in the media.

Fitzgerald lays the groundwork for Libby's testimony. The prosecutor asks Libby to discuss the frequency of his conversations with the media, and how Libby shares information with reporters without attribution.

Libby also discusses the vice president's strategy following the publication of a May 2003 article by New York Times reporter Nicholas Kristof on Wilson's trip to Niger. The article stated that Wilson had told the CIA and the State Department that intelligence on Iraq's attempt to purchase uranium was wrong, and that the documents in support of this claim were forged. Libby testifies that Cheney told him to communicate to the press that Cheney didn't know about Wilson's mission or his report.

Libby also discusses how he learned of Plame's identity. He says that Cheney told him that Ambassador Wilson's wife worked for the CIA with a tone of "curiosity." Undersecretary of State Marc Grossman testified that he told Libby that Wilson's wife worked at the CIA. But Libby says he doesn't remember that conversation.

Libby recounts how Cheney came up with a strategy on approaching New York Times reporter David Sanger and Washington Post reporter Walter Pincus, who was publishing a follow-up to the Kristof article. Libby also recalls the reaction in the vice president's office to Wilson's New York Times op-ed.

Libby says that he forgot Valerie Plame's identity for about a month until a July conversation with Tim Russert.

Libby also recalls the reason why he contacted NBC Washington Bureau Chief Tim Russert: to counter claims made by MSNBC's Chris Matthews. On his nightly show, Matthews said that Cheney had sent Wilson to Niger and had received the former ambassador's findings. Therefore, Matthews said, Cheney should have stopped President Bush from including claims about Iraq's attempt to buy uranium in Niger from his 2003 State of the Union address.

Libby says he called Matt Cooper to "get some attention." He says he told Cooper on deep background that according to the October 2002 National Intelligence Estimate, Iraq was vigorously trying to procure uranium.

Libby says that he and Addington discussed how to declassify the National Intelligence Estimate. Libby says that Cheney wanted to place NIE information in the public domain through Judith Miller. Libby testifies that Miller was the first reporter with whom he discussed the NIE report. At a meeting in the coffee shop of the St. Regis Hotel in Washington, Libby says that he gave Miller a bulleted list of information from the NIE. The meeting did not result in an article by Miller.

Hour 6: Did His Wife Send Him?

Libby says that he asked then-Deputy Secretary of Defense Paul Wolfowitz to speak with reporters at The Wall Street Journal about the contents of the NIE report, because Wolfowitz had better contacts at the publication.

Libby recalls a luncheon that the vice president held on July 17 or July 18, 2003, with conservative columnists. He says the columnists at the event received copies of unclassified portions of the NIE report that made reference to Iraq's efforts to buy nuclear materials.

Libby discusses a paper — which appears to be written by Cheney — that questions whether Ambassador Wilson's wife sent him on a "junket" to Niger. The paper says that Wilson distorted the substance of his findings, and that the press did, too.

Libby recalls the events surrounding the fall 2003 investigation into who leaked Valerie Plame's identity. He also discusses media coverage of the probe. Several news articles discussed Plame's identity. Fitzgerald asks whether Libby thinks he was the administration official cited in some news reports.

Libby also recalls a White House press conference in which spokesman Scott McClellan declared that Karl Rove was not involved in leaking Plame's identity. When asked about Libby, McClellan did not offer a similar defense.

Libby reviews a series of notes he wrote regarding his efforts to get the White House to publicly deny his involvement in the leak of Plame's identity.

Libby also examines a document with Vice President Cheney's handwriting on it. The document bears a note that reads: "Not going to protect one staffer and sacrifice the guy that was asked to stick his neck in the meat grinder because of the incompetence of others."

After President Bush asked anyone with information relevant to the leak probe to come forward, Libby says that he discussed the matter with Cheney three times. On two occasions, Libby says, the vice president told him that Libby didn't have to tell Cheney anything. On a third occasion, Libby told Cheney that he believes he learned of Plame's identity from the vice president himself.