Accessibility links
Oscar Nominee Mark Wahlberg Actor Mark Wahlberg is an Academy Award nominee for best supporting actor for his role as a police sergeant in the film The Departed. Wahlberg's other films include The Perfect Storm, Three Kings, The Italian Job, and Invincible. 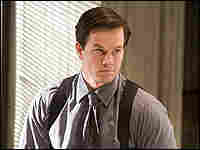 One of the initial members of the pop bubblegum group New Kids on the Block (with his brother Donnie), Wahlberg left before the group became famous. Later, with his brother's guidance, he created Marky Mark and the Funky Bunch and recorded the album Music for the People, which included the hit "Good Vibrations." Wahlberg went on to record one more album, and appeared in a number of Calvin Klein underwear commercials.