Accessibility links
Public Picks Favorite American Buildings The American Institute of Architects has compiled a list of the most appealing buildings in the U.S. The Empire State Building ranked number one, but Washington, D.C., claimed the most structures in the top 10. 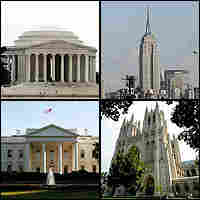 According to a recent poll, the White House, Thomas Jefferson Memorial, National Cathedral, and Empire State Building are the top four buildings in a list of America's favorite architecture. Getty Images hide caption

Prime real estate usually features good design with a lot of street appeal. The American Institute of Architects has compiled a list of the 150 of most-appealing buildings in the U.S.

The Empire State Building has long been one of the most popular tourist attractions in the U.S. It has appeared in numerous films, from King Kong to Sleepless in Seattle, so it's no wonder that it was ranked No. 1 in the poll that surveyed nearly 2,000 people.

The American Institute of Architects (AIA) and Harris Interactive teamed up for a public poll of the 150 best works of architecture in America. Buildings in Washington, D.C., dominate the top ten, but New York City claims the highest number of favorites. Other notable structures include Monticello in Charlottesville, Va., Wrigley Field in Chicago, and the Philadelphia City Hall in Pennsylvania.