Accessibility links
Gospel Funk: Good for the Body, Good for the Spirit Mighty Voices of Wonder's "I Thank the Lord" melds genres in raw, funky fashion. The opening drums hit with a jagged, ragged edge, and the shouts and hollers push the energy level higher, as the group testifies with a fervor that would impress James Brown or Jackie Wilson.

I Thank the Lord 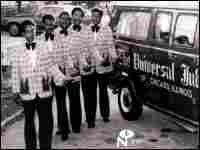 An image from the cover of Good God! A Gospel Funk Hymnal. hide caption

"Gospel funk" isn't often bandied about as a genre, and with good reason: Though funk's roots are in soul and soul's roots are in gospel, these family relations are strained by what are perceived as conflicting missions. Funk is the epitome of secular sensuality, encoded in rhythms whose sexual overtones are rarely subtle, and this tends not to go over well with gospel patrons for whom the music is meant to uplift away from the body and into the spirit. However, in cities throughout America, especially in Chicago and Detroit (where much of the Good God anthology draws its material), there was no shortage of church-goers whose Sunday best covered up two previous evenings of more base supplications.

What makes Mighty Voices of Wonder's "I Thank the Lord" unusual is that, while many gospel artists have occasionally recorded soul or funk songs with secular content (The Staple Singers being an obvious example), the musical aesthetic might be funk, but the songwriting still operates in the gospel tradition. For many conservative fans, that mix was heretical, thus explaining the relative obscurity of these songs, but for the less parochial, there's a giddy sense of surprise to hearing funk rhythms backing songs dedicated to the Almighty.

Ironically (or appropriately), "I Thank the Lord" itself adapts a soul song by another set of former gospel singers: Sam and Dave and the 1968 hit "I Thank You." Recorded in Michigan's Revival Studios, with equipment that was probably more primitive than what Sam and Dave would have enjoyed at Stax, Mighty Voices' version of "I Thank the Lord" sounds far more raw and funky. The opening drums hit with a jagged, ragged edge, setting the tone for a song that throbs with earthy grit. The shouts and hollers only push the energy level higher, as the group testifies with a fervor that would impress James Brown or Jackie Wilson. It's hard to imagine how this would go over in a staid Detroit church during morning services, but at the very least, it would wake the congregation.