Accessibility links
'Lives of Others,' a Glimpse at East Germany The Lives of Others is set in communist East Berlin in the days before the fall of the Berlin Wall. It focuses on a police captain who is forced to put a wire tap on a famous playwright.

Listen
'Lives of Others,' a Glimpse at East Germany 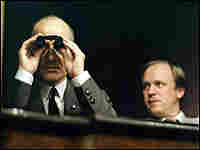 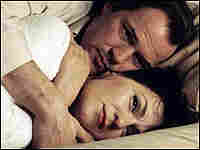 Sebastian Koch and Martina Gedeck, as a playwright and actress, are the targets of the surveillance. Sony Pictures Classics hide caption

The Lives of Others is a potent narrative set in East Germany before the Berlin Wall fell.

Directed by first-time filmmaker Florian Henckel von Donnersmarck, its theme is the effects of political surveillance on the watchers and the watched. It turns that story into a python-tight embrace of tension and emotion that proves that moral dilemmas can be the most intensely dramatic quandries of all.

Von Donnersmarck has set his film in the East Germany of 1984. It was a time when the terrifying Stasi, the secret police, made it their business to use an extensive network of spies and surveillance to know every secret thing about their citizens. The film is an inside look at how a society set up to discover and prey upon human weakness makes everyone a potential suspect and destroys everything it touches.

The Lives of Others does all this beautifully, but it is too well-acted a film, too meticulously plotted and carefully directed, to be satisfied with that alone. It's also too smart to be content with telling anything like a familiar story. Instead it places its key characters in high-stakes predicaments where what they are forced to wager is their talent, their very lives, even their souls.

The Lives of Others shows what happens when the state's top wiretapper, a captain in the Stasi, investigates the lives of East Germany's premier playwright and his actress mistress.

When you wiretap as conscientiously as the captain, you find out all sorts of things, much more than you set out to learn. The captain's increasing empathy for the couple he spends so much time eavesdropping on produces complex and shattering results no one could have predicted.

Gradually, the film's interlinked character studies reveal a high-tension society rife with jealousy, idealism and betrayal — all intensified by the fatal corruption of the system. To create such a subtle yet gripping world, a world where the difference between meaningful action and senseless heroics is anyone's guess, is an accomplishment worthy of an Oscar, and more.