Accessibility links
Self-Pity and Bad Behavior, with Strings The Cost finds The Frames harboring more commercial ambitions than usual, but no one involved has forgotten singer Glen Hansard's odd ability to sound sweetly romantic, big-hearted, self-deprecating and emotionally stunted at the same time.

Self-Pity and Bad Behavior, with Strings

Self-Pity and Bad Behavior, with Strings

The Irish rock band The Frames first emerged on the brink of stardom way back in 1992 — several lifetimes ago in the world of popular music. In the time since, it's survived commercial failures on no fewer than three different U.S. major labels while slowly establishing itself as one of the biggest live acts in Europe. The last few years have been kinder to the band's fortunes here: After a few brilliant sleepers (including 2001's For the Birds and the live album Set List) expanded The Frames' cult following, a few tours with Damien Rice helped it capitalize on that momentum. Suddenly, the group can't seem to miss: Singer Glen Hansard was even one of the hits of Sundance, for his lead acting role in the musical drama Once. 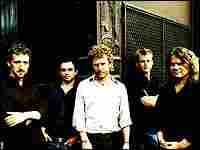 The Frames first emerged on the brink of stardom in 1992. hide caption

That film spawned one of last year's loveliest surprises — Hansard's album The Swell Season, recorded with co-star Marketa Irglova, was the product of recording sessions for its soundtrack — and it lays the groundwork nicely for the release of an excellent new Frames album. The Cost understandably finds the band harboring more commercial ambitions than usual, even re-casting a pair of Swell Season songs as radio-friendly mid-tempo ballads, but no one involved has forgotten Hansard's odd ability to sound sweetly romantic, big-hearted, self-deprecating and emotionally stunted at the same time.

The Cost closes with the quietly unnerving "Bad Bone," which finds the singer ruminating on the mysterious forces that doom his relationships, with particular emphasis on his own failings: "There's a bad bone inside of me," he sings, adding, "All my troubles started there." That's nonsense, of course — bad behavior and self-pity never mix well — and Hansard surely knows it. But the song delves deeper, painting a vivid scene while he warns against the point when "the anger that you feel turns to poison in your soul." As Hansard's marvelous backing players build to an elegant climax, the song closes The Cost with an indelibly powerful moment, the product of a band that knows little else.