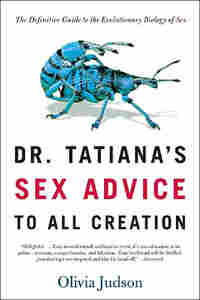 A Note from Dr. Tatiana

In my business I get asked a lot of questions. Many of them concern matters beyond the wildest human imaginings. But the most common question is mundane enough: Why did I become a sex expert? Quite simply, I decided to dedicate myself to sex when I realized that nothing in life is more important, more interesting — or more troublesome.

If not for sex, much of what is flamboyant and beautiful in nature would not exist. Plants would not bloom. Birds would not sing. Deer would not sprout antlers. Hearts would not beat so fast. But ask an assortment of creatures, what is sex? and they will give you different answers. Humans and many other species will say copulation. Frogs and most fish will say the squirting of eggs and sperm in joint shudders of spawning. Scorpions, millipedes, and salamanders will tell you that sex is packets of sperm deposited on the ground for the female to sit on so they'll explode into her reproductive tract. A sea urchin will say sex is releasing eggs and sperm into the sea in the hope that they will, somehow, find each other in the waves. For flowering plants, sex is trusting the wind or an insect to carry pollen to a receptive female flower.

To succeed, each of these methods requires a suite of different features. A male flower who wishes to be a Lothario and have his pollen strewn to as many mates as possible must seduce not female flowers but bees. Other creatures must wear gaudy costumes, be they fancy feathers or frivolous fins; they must sing and dance for hours and hours; they must perform prodigious feats, building and rebuilding nests and bowers. In short, they must expend enormous energy shouting, "Choose me, choose me." And all for — what?

In truth, these various practices are just the means to an end. The ultimate sex act — the act that all these antics have evolved to accomplish — is the mixing of genes, the creation of an individual with a new genetic makeup. To a miserable organism sitting alone in a singles bar, genetic mixing might not seem worth the bother. Yet it is fundamental to the grand scheme of things. To see why, let's take a step back and think about how evolution works.

For most of us, caught up in the hurly-burly of our daily struggles, the purpose of life may seem elusive. But from an evolutionary point of view, the purposes of life are clear: survival and reproduction. If you fail at either, your genes go with you to the grave. If you succeed at both, you pass your genes on to your children. Inevitably — such is life — some organisms do better than others at surviving and reproducing. If everyone had identical genes, then differences in survival and reproduction would be due to luck, not genes. But usually individuals have different genes. And insofar as a particular gene confers an advantage in terms of survival or reproduction, that gene will spread.

This simple process, discovered by Charles Darwin and Alfred Russel Wallace in the nineteenth century, is the principal mechanism of evolution. It is known as natural selection. Sometimes the process is fast and easy to see. Suppose a poison — an antibiotic, say, or an insecticide — appears in the environment. And suppose that surviving the poison depends on having a particular gene. Those who do not have the gene will die, their genes "deselected" from the population. In the extreme case, no one has the resistance gene, everyone dies, and the population becomes extinct. More often than not, however, some individuals are fortunate and have a gene to resist the poison. Since these individuals are the only ones to survive and reproduce, the genetic makeup of the population will shift to one where everybody is resistant.

Thus, genetic variation is crucial: no genetic variation, no evolution. But where does genetic variation come from? There are two main sources: mutation — and sex. Mutation, or random changes to information contained in genes, is the more primitive of the two. Mutations arise from errors made by the cell's genetic copying machinery. Since no scribe is perfect, some errors are inevitable — which is just as well. Whereas sex produces new combinations of genes that already exist, mutation creates altogether new genes — and thus generates the raw material of evolution. Without mutation, evolution would grind to a halt.

Yet mutation by itself is not enough. From time to time organisms evolve to give up sex, reproducing asexually instead. When this happens, any genetic differences between a parent and child are, by definition, due to mutation only. At first, asexual organisms often flourish. But their glory is fleeting. For reasons that remain mysterious, the loss of sex is almost always followed by swift extinction. Apparently, without sex you are doomed.

Which is not to say that sex makes life easy. No matter how good your survival skills are — you can be the champion at evading predators, or have the best nose for finding food, or be immune to every disease — it will all be for naught if you cannot find, impress, and seduce a mate. Worse, success at seduction is often at odds with survival. If you're a bird, flaunting an enormous tail may make you quite the cock among hens — but it may also make you lunch for a cat. Worse still, the competition for mates is often exceedingly stiff.

The upshot of all this is that the need to find and seduce a mate is among the most powerful forces in evolution. Perhaps nothing in life generates a more ecstatic diversity of tactics and stratagems, a more surprising array of forms and behaviors. In comparison, tricks to avoid predators seem predictable and limited. They typically include one or more of the following features: going about in groups, moving fast, blending in with your surroundings, looking scary, sporting a shell or sharp bits, or tasting revolting. But tricks to seduce a partner — ah, here the variety is endless. Which is why everyone asks so many questions.

And which is why I have dedicated my life to answering them. In the pages that follow, I have chosen samples of my correspondence over the years. I have deliberately selected questions that seem to me to address the concerns of all creatures, such as promiscuity, infidelity, and homosexuality. I have grouped questions on related topics into chapters, each of which has the briefest of introductions and concludes with a summary of my advice.

The chapters, in turn, fall into three related parts. In the first part, "Let Slip the Whores of War!" I reveal the reasons that males and females so often want different things from each other, and from life, and I explore some of the consequences. The second part, "The Evolution of Depravity," discusses situations where the collision is at its most intense — sometimes generating horrific outcomes, including rape and cannibalism. This part finishes with a brief chapter on the rarest, most aberrant evolutionary phenomenon: monogamy.

The last section goes further still, to ask "Are Men Necessary?" Here, I consider various matters to do with the evolution of gender and of sex. In an attempt to find out why sex is so essential for long-term evolutionary success, the final chapter is a discussion with the only organism so far known to have succeeded in living for millions and millions of years without it.

What of my methods? To respond to my readers, I have sifted through the scientific literature, reading hundreds of books and papers; I have interviewed specialists on subjects from dwarf males to giant sperm. When the answer is not known to science, as often it is not, I have given my best guess based on the knowledge available and my understanding of natural selection. Sometimes, as a result of my research, I have come to conclusions that are different from the prevailing wisdom; thus, I hope that in a small way this book makes a contribution to ongoing debates. In that spirit of open scientific inquiry I have provided, at the end of the book, all my sources.

I have found from experience that most organisms prefer to be called by heir common names rather than by their technical Latin names — after all, few humans talk of themselves as Homo sapiens — so I use Latin names only when necessary for clarity or when the organism I am discussing is too obscure (or too snobbish) to have a common name. In observance of scientific custom, I have given measurements in metric units. However, in those instances where I felt it would be helpful to my readers in North America, I have provided conversions. Finally, I would like to thank my correspondents for agreeing to let me make public problems of a most intimate nature. This book would not have been possible without them.