Accessibility links
Pete Dexter, Writing 'True Stories' Novelist Pete Dexter was once a columnist for the Philadelphia Daily News. The title of his new book says it all: Paper Trails: True Stories of Confusion, Mindless Violence, and Forbidden Desires, A Surprising Number of Which Are Not About Marriage.

Novelist Pete Dexter was once a columnist for the Philadelphia Daily News. The title of his new book says it all: Paper Trails: True Stories of Confusion, Mindless Violence, and Forbidden Desires, A Surprising Number of Which Are Not About Marriage.

Before Pete Dexter became a National Book Awarding-winning novelist, he wrote about lost dogs, frightened families, women's cleavage and the guy - Jack Walsh is his name - who wanted to have a four-ton truck sit on his stomach for 10 seconds. Mr. Dexter was a columnist for the Philadelphia Daily News and Sacramento Bee during a time when many big cities had a signature columnist who wrote about the kind of people and events that were often overshadowed by headlines, leads and breaking news. A new collection of his columns from the 1970s and '80s has just been published. It's called "Paper Trails: True Stories of Confusion, Mindless Violence and Forbidden Desires, A Surprising Number of Which are Not About Marriage."

Pete Dexter, who won the National Book Award for his novel, "Paris Trout," and wrote the screenplays for "Rush" and "Mulholland Falls," joins us now from member station KUOW in Seattle. Mr. Dexter, thanks so much for being with us.

Mr. PETE DEXTER (Author): Well, thank you for inviting me over.

SIMON: Now that you've had a chance to look back at your work 20 years ago, and more, what makes a good column and a good columnist?

Mr. DEXTER: I think your instinct has to be to confront. If you're the kind of guy that comes to a peaceful lake and you know there's birds floating around on it and it's early morning or something and you're happy just standing there looking at that beautiful sight, then maybe you're a photographer. But you know, if your instinct is to toss a rock in the pond and watch the birds come up and watch what it does to the surface of the water, to me it's that interruption of quiet, which is not just about what column writing is about, but it's about what writing itself is kind of about, when you think about it, you know.

SIMON: I want to get you to read the first paragraph of one of your columns, which I - you begin to read it and it's irresistible, you have to get to the rest. I'll tell you - page four.

Mr. DEXTER: I think it's fair to say that women overestimate breasts. More to the point, they overestimate the hold breasts have on men. Men notice new breasts, but by the time they get to know the owner, breasts, or the absence of breasts, are among the things they've taken for granted, like Southern accents. This isn't all bad. Like almost everything else, in the end, breasts are more complicated than they look. And too much thinking can ruin anything.

SIMON: What brought about this column, Mr. Dexter?

Mr. DEXTER: This was a column for Redbook magazine that a woman named Marilyn Johnson - she was an editor there - she called one day and asked if I would write something for Redbook about breasts. And I said, well, sure. You know, it probably took an hour to write it, but on the other hand, you know, at that point in my life there's probably been 35 years of breast issues that I've been considering very seriously.

SIMON: Research, I think we call that.

Mr. DEXTER: Yeah. Well, you can call it research, because I never...

SIMON: All right, scholarly contemplation then.

SIMON: That's, I guess, one of the joys of writing a column, isn't it? You force yourself to pursue interests and, as you say, confront things that otherwise you might not.

Mr. DEXTER: The nice thing about a column is you can see, in a very short period of time, like if that idea has anything to it or if you're just going to have to fake it and put something out there that's readable. But it's kind of nice starting over three times a week. As somebody that's been working for the last three years on a novel, there's a lot of days I'd like to go in there and start fresh.

SIMON: You have a column in here about Jose and Tony, two guys in Camden, New Jersey, right across from Philadelphia, who repair parking meters. And they find a white bag under the meter one day.

Mr. DEXTER: They're stuck with what a nice bag it was and, you know, they pick it up and look inside it and there's been jammed in there, it's - there's a head inside it.

Mr. DEXTER: And the story of the column is - it's just a story of what happens to your head if it gets found in a bag by a - you know, underneath a parking meter, and how it really, you know, there's - as I remember it, there's people that don't want to take the head because it's going to be all that extra paperwork. And you know, all the different places it has to go before it's put in a plastic bag and shipped up to Trenton, the state capital, where they take care of this, I guess.

SIMON: Now, Mr. Dexter, how did you - how did that story come into your life?

Mr. DEXTER: Oh, just a guy from Camden gave me a call. I mean the second that guy calls you and tells you that he found a head, I mean you know - I mean the column is, you know, it's almost written for you. I mean this guy just gave you a present. Well, sort of, yeah.

SIMON: Sort of, yeah. I guess if you can't make a column out of a human head being found in a bag under a parking meter, you really ought to find something else to do in life.

Mr. DEXTER: Yeah, you ought to - you certainly should.

Mr. DEXTER: Not much, to tell you the truth. I read the New York Times. I read some of their columnists. I find them really heavy-handed for the most part and predictable. But Dorothy Rabinowitz at the Wall Street Journal...

SIMON: This collection of columns ends with a column you wrote about a kid coming up to you, I think, in the parking lot of a Church's Fried Chicken restaurant and asking you for money because he's hungry. And you were just tired of the whole thing. Do you remember what happened?

Mr. DEXTER: You know, I just didn't want to be bothered. And I started thinking about it and I drove back around Church's Fried Chicken and got a couple of chicken dinners instead of one. Gave him one. He was going through garbage for food.

SIMON: You know what? I remember that column. He begins to eat the fried chicken dinner very hungrily in the parking lot and a cat comes out of the weeds. And do you remember what he did?

Mr. DEXTER: Yeah. He tossed him a little piece of it too. Yeah. Boy, you know, you're making me nostalgic for Philadelphia.

SIMON: Yeah. Mr. Dexter, your columns do that. Nice talking to you, sir.

Mr. DEXTER: Well, it was nice talking to you. And we'll do it again.

SIMON: I hope so. Pete Dexter. His new book is "Paper Trails: True Stories of Confusion, Mindless Violence and Forbidden Desires, A Surprising Number of Which are Not About Marriage." 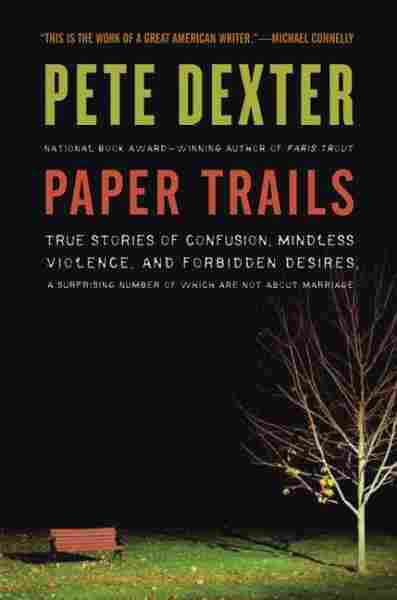 True Stories of Confusion, Mindless Violence, and Forbidden Desires, a Surprising Number of Which Are Not About Marriage

Title
Paper Trails
Subtitle
True Stories of Confusion, Mindless Violence, and Forbidden Desires, a Surprising Number of Which Are Not About Marriage
Author
Pete Dexter