Accessibility links
Kicking and Screaming, Metal Back in Music Spotlight Heavy metal has some titans in its past, like Black Sabbath and Metallica. But it hasn't produced a real star for a decade or so. But new bands like Mastodon and Lamb of God, each up for a Grammy on Sunday, suggest metal may be making a resurgence.

Listen
Kicking and Screaming, Metal Back in Music Spotlight

Grammy nominees for solo, duo, group or collaborative performances, with vocals. Singles or Tracks only.

Eyes of the Insane 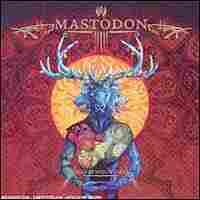 Mastodon is one of the five heavy metal bands up for a Grammy Award this year. Their album Blood Mountain is about a quest to climb a mountain made of blood to capture a crystal skull. Reprise/Relapse Records hide caption

Whatever happened to heavy metal? On tonight's Grammy Awards, the five nominees in the Best Metal Performance category might wonder if they even want to be invited to the party; the music has rarely gotten along well with the pop music establishment. And it has been years since an industry spotlight has shined on a heavy metal band.

The state of heavy metal may be in question, but partisans can agree on one thing: The form's roots are located in the chugging guitar and wailing vocals of two bands: Led Zeppelin and Black Sabbath.

"It's very powerful music," says Shawn Bosler, a New York writer and musician. "It's bombastic, it's like Wagner, and the themes have always been fantasy or war."

Bosler counts himself as a longtime follower of metal and its misunderstood fans.

Accordingly, metal led its fans along a couple of dark pathways. Down one: death and suicide, gore and Satan. Down the other, slightly less-morbid, path: a Lord of the Rings-style fantasy world with monsters and hobbits. So things went through the '70s and '80s, when British bands like Deep Purple, Iron Maiden and Motorhead ruled the scene. A scene encapsulated by the 1986 cult documentary Heavy Metal Parking Lot, which captured the excitement of teenage fans hanging out before the big show.

Metal has done its best to change with the times — the so-called hair bands, spandex-clad pretty boys, in the 1980s, even rap-metal in the '90s. This created some theoretical problems for bands who would have preferred to remain more in touch with metal's roots.

Mudrian says that, freed from the pressure of the mainstream, metal went underground. Now, a diverse set of bands have re-invigorated the scene, inspired in part by the heavy, virtuoso playing of old-school metal groups like Led Zeppelin and Metallica, the biggest metal group of the '90s. They're even into monsters again.

Heavy metal has always gone for big and heavy and hairy. So maybe it's appropriate that the band Decibel named the very best of 2006 is called Mastodon. Brann Daillor, the band's drummer, says his genre has grown into something that fosters innovation.

"There's this preconceived notion that if you want to be successful and be on the radio, you have to dumb it down," Daillor says "Just give them a four/four, the song has to be three and a half minutes long, verse/chorus/verse/chorus/bridge, and that's it. Besides jazz, there's the possibility with heavy music to be really technical and really push yourself as a musician."

Mastodon, which came together in Atlanta during metal's commercially lean years, unapologetically embrace the genre's grandiose beginnings. Each of their albums tells an epic story — Leviathan, from 2004, is a retelling of Moby Dick; last year's Blood Mountain is about a quest to climb a mountain made of blood to capture a crystal skull.

"Imagery and storytelling and the art of the whole thing is interesting to us to write about that stuff and have the artwork on the cover. [It's] the mystique of it all," says Bill Kelliher, one of Mastodon's guitarists.

"For us it has to be epic and it has to be a giant something or other," adds Daillor. "A mountain. Something monolithic. A giant squid, a giant whale. It makes for really bad-ass T-shirts, too."

Mastodon signed to a major label for Blood Mountain, which has sold 90,000 copies and is up for a Grammy. But other bands are making a mark. The Boston group Killswitch Engage, for example, has sales of nearly 200,000 for their record As Daylight Dies since its release last November. That's still nowhere near the numbers Metallica sold in its heyday, but according to Albert Mudrian of Decibel, something crucial has happened within the genre.

"All these factions and all these bands [have been] coming together in a community and trying out different things and bouncing ideas off one another in a lot of ways and creating new avenues to go with things," Mudrian says.

Chances are, the appeal will persist through the changes. Heavy metal is the horror-movie genre of rock music — equal parts silly and scary, and endlessly appealing to teenage boys, no matter how much it is parodied — from Spinal Tap to Beavis and Butthead to Tenacious D.

"Here's the key to it, really," Mudrian says. "The thing that any superfan of metal will think is the coolest thing they can find, isn't the heaviest riffs or the fastest beats or the craziest vocals. It's bands being sincere and genuine."

"It's kind of a call to arms of truth, in a way," he says. "Even though a lot of it is really cartoony or really silly, there's always been an issue of it about speaking the truth and speaking from your heart, which I've always been really drawn to."