Accessibility links
Colleges Want to Cool Admissions Frenzy College presidents are trying to reduce the frenzy surrounding the admissions process through small changes. The goal is to reduce anxiety among applicants and offer more help for low-income students who want to go to selective schools.

This is the second report in a seven-part series. 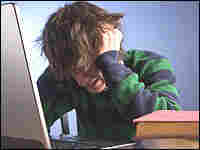 More and more students are applying for fewer and fewer spots at America's most selective schools. This has prompted many university presidents and deans to rethink the entire admissions process. Ed Hidden/iStockphoto hide caption 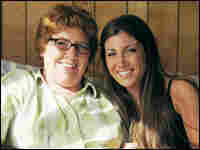 MIT Dean of Admissions Marilee Jones decided to rethink the frenzy and stress associated with college admissions after going through the process with her own daughter, Nora. Courtesy of Marilee Jones hide caption

MIT Dean of Admissions Marilee Jones decided to rethink the chaos and stress associated with college admissions after going through the process with her own daughter, Nora.

The frenzy over college admissions at America's most selective colleges has many causes: demographic shifts, with too many high schoolers chasing too few slots; cutbacks in funding; and the growing belief that college is required for success in any career.

More pressure comes from a multibillion-dollar industry of college consultants, test prep courses, marketers and popular college-ranking systems by organizations such as the Princeton Review and U.S. News & World Report. But recently, a number of university presidents and deans have come together to rethink the admissions process, while conceding that change will be difficult.

Jones has addressed more than 300 audiences of parents and high-school students on the topic of "giving childhood back to our children." She says she found religion on the issue after going through the college admissions experience with her daughter, "watching what happened to her and watching my own behavior, which was crazy."

Another leader in the movement against the admissions frenzy is Lloyd Thacker, a former college-admissions officer who now runs a foundation called the Education Conservancy. Thacker is the editor of College Unranked: Ending the College Admissions Frenzy, a collection of essays written by more than a dozen college leaders.

A few years ago, Thacker began questioning the college rankings by U.S. News & World Report. The magazine rates colleges on factors such as SAT scores and percentage of applicants rejected. Thacker says the rankings have increased competition and turned educational institutions into market-driven businesses. He says that this competition has led to more stratification, more financial aid based on merit instead of need, and more dishonesty.

"There is a growing disconnect between admission practices and educational values," Thacker says.

He recites what he constantly hears from students: "I have to play the game to get in. I have to take the toughest classes. SATs matter most. I have to get a private consultant. I have to do test prep. I have to choose my activities strategically, depending on the colleges I want to get into. I have to apply early to get in."

Some say it's not all that bad. Lee Bollinger, president of Columbia University, says he is no fan of the rankings, but the problem with admissions "is not of the magnitude that many people say it is." Bollinger says the admissions process fundamentally works with integrity across the country.

It's understandable how rankings have taken on such importance. Leon Botstein, president of Bard College, says parents may well ask themselves, "What will help my child make it in a world that is hostile, competitive and difficult?"

"If you believe naively that the rankings can be translated into graduate school admissions, jobs, income, then one says, 'Go to the best place," Botstein says, adding, "People love easy answers. What is the best place? No. 1."

How to Move Beyond the Widely Despised Rankings

College presidents and deans are now trying to come together to discuss admissions. Thacker describes the meetings as productive but challenging.

Colin Diver, president of Reed College, has gone to some of those meetings. He says most university presidents condemn the college rankings, but can't imagine doing anything about them. At one meeting, he recalls, he signed and passed around a piece of paper that stated, "I hereby pledge that my college will pull out of the rankings." No one else joined him.

Marilee Jones of MIT argues that since the rankings are not going away — and most of the information in them is in the public domain, anyway — universities might as well maintain some control over that information and how it is presented.

"They are not experts," Botstein says of university presidents, adding, "most of the more intelligent people don't fill it out."

Collaboration among colleges also has been hindered by antitrust suits filed by the Justice Department in the early 1990s. Colleges were accused of price fixing, because they were conferring about the amount of financial aid offered to individual students. Jones of MIT says even now, it is hard to have certain discussions among admissions officers without having a lawyer in the room.

Robert Massa, vice president for enrollment and college relations at Dickinson College, says the investigations created a situation where a once-collegial atmosphere turned to one of mistrust and competition for students. He says today, many highly selective colleges essentially "buy" the best students by discounting the price of admission, leading to disproportionate amounts of merit-based aid at the expense of financial aid for the truly needy.

No one believes rankings or marketing are going away, and so many colleges are focusing instead on making small changes:

Jones of MIT says colleges and universities should be more honest and try not to be all things to all people. When a student applies who seems like a questionable prospect, "you should be honest enough to say, 'Our school wouldn't be a good choice for you, but you might consider the following schools,'" she says.

While there is no consensus, almost everyone agrees that highly selective colleges should take a collective step back and spend some time reflecting on the relationship between their admissions process and educational values.