Accessibility links
Quirky Essays a Window to Future Success? Tufts University is trying to spot the future leaders in its vast pool of applicants by assigning optional essays on offbeat topics. Other colleges are doubtful of the experiment, but watching with interest.

This is the third report in a seven-part series. 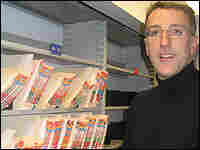 It's easy to feel sorry for high-school students filling out college applications and laboring to come up with 300 original words about a personal hero or a life-changing experience.

But you might not have thought to pity the person who has to read all those essays.

"We read the same essays over and over, and they all say the same thing," says Lee Coffin, dean of admissions at Tufts University, in Medford, Mass.

He says he gets thousands of applications every year with polished but predictable essays, such as "My Grandfather, My Hero" or "My Summer in Costa Rica." The essays are sincere, he says, but interchangeable: "The voice [is] what's missing."

The lack of distinction among essays is a big problem for Tufts, as well as for colleges around the nation. It makes it difficult to decide whom to admit from what Coffin calls the "qualified muddle" — the vast majority of students who have good grades, recommendations and extra-curricular activities, but who on paper tend to look the same.

So, Tufts has implemented a new idea: What if instead of writing an essay, students were asked to draw a picture? Or write a short story, about, say, "The Disappearing Professor" or "The End of MTV"?

School officials are now hoping that better questions might result in better answers — and better clues about who students really are.

Sternberg designed the new questions based on research he did as a psychology professor at Yale. He says his questions can predict academic success and measure different aspects of intelligence. Since Tufts' mission is to train future leaders, Sternberg's questions are meant to assess leadership potential, which he breaks into a mix of creativity, practicality, analytical skills and a certain kind of wisdom that's different from book smarts.

Sternberg says the new admissions process looks beyond standardized test scores to seek out who a student really is: "Sure, we want kids who are good in academics. But the difference will be that these are kids that the world will be a different place for them having been in it."

So far, it seems to be working. Lee Coffin says the essays remain optional, but most students who answer them are letting their hair down, revealing that elusive leadership quality Tufts wants.

Confessions of a Middle-School Bully

Coffin was delighted by a short story entitled "Confessions of a Middle-School Bully," written by Everett Wallace, a high-school senior from a Boston suburb. The young writer says he groaned when he first saw Tufts' new essay questions. But once he started writing, he really got into the character of his fifth-grade bully, and his comical attempts to reform by applying the ideas of some great ethical philosophers. For example, Everett explains what happens when his fictional toughie reads Immanuel Kant, and learns that he should do what he would want everyone else to do.

"So at lunch, [the bully says,] "I've got this cookie, and wouldn't it be nice if everyone gave out cookies?' So he goes over to someone he's probably bullied before, and the kid is terrified and he says, 'No, I don't want your cookie!' And he says, 'You're taking my cookie! I'm being ethical here.' So he starts force feeding him the cookie and the teacher comes over and she sends him to the principal's again."

"It was witty, it was well-informed, it was smart, and that was all you needed to know about this kid," Coffin says.

Other schools, such as the University of Chicago, have been asking quirky essay questions for years. But Tufts is the first to attempt to use the questions as a kind of scientific metric to gauge such intangibles as leadership. Tufts will be tracking students to see if those who write great essays do, in fact, turn out to be leaders.

Some experts are skeptical.

"The essays might indicate whether you have a quirky kind of mind, whether you can think about things outside-the-box, so to speak, whether you might be an interesting person to have on campus," says Howard Gardner, a Harvard professor and author of Frames of Mind, the classic book on multiple intelligences. "But it's probably not the right way to assess leadership or practicality or creativity, in my view."

"Years ago, Harvard had quite a diabolical interviewer," he said. "He used to do things like nail windows shut, and ask the student to open it to see what they would do. Or they would come in, he would be crawling on the floor, saying he couldn't find his contact lenses and see if they freaked out or if they helped him. So the $64,000 question is, 'Do we have to be much, much more imaginative?' "

But colleges today tend to be more interested in being expedient than imaginative. Ted O'Neil is dean of admissions at the University of Chicago, which recently announced plans to make its famously quirky questions optional, rather than required. The questions do elicit better answers, O'Neil says. But on the down side, he says, they tend to discourage some students from applying. That can make a campus less diverse. And fewer applicants can also make a school look less selective, which may mean a drop in its ranking.

"Sometimes, being imaginative costs you," O'Neil says. "And the question is: How many of us are willing to bear the costs of being different, being imaginative, asking tougher questions? And I think we all have some reluctance to do that."

Still, many schools are watching Tufts' experiment with cautious optimism. Marilee Jones, dean of admissions at MIT, says Tufts may be on to something — if not a silver bullet, at least a way to loosen kids up a little, and get them to write essays that are a little less safe and a little more inspired.

She says that leads to more questions: "Is there some other way that we can find the essence of the human? Who is this being here? Not the doing, but who is the being in the application?"

Ultimately, better essay questions will reveal more than just what makes students unique, so that schools can decide whom to admit. They will also show what's unique about universities, so students can decide where to apply.