Accessibility links
Where the Millions Go in a Presidential Campaign A new president will emerge next year after one of the longest and most intense campaigns that America has ever seen. And that means it will also be one of the costliest. The election is 20 months away, but the candidates have already begun spending money.

Listen
Where the Millions Go in a Presidential Campaign

More than half of the expenses in a presidential campaign are related to media and advertising. Getty hide caption 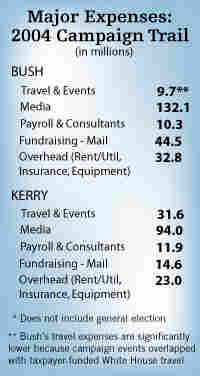 In presidential primaries, money is usually the sign of a winner. Since 1980, the best-financed candidate has won eight out of the 10 contested primaries. This year, the magic number appears to be $100 million — the target to hit by the end of this year. But where do the millions go?

More than half of the cash will go to media costs. One could say that the first presidential primary advertisements for 2008 hit the airwaves as far back as Dec. 16, 2006. That's when the political action committee of Republican presidential hopeful Duncan Hunter, a California congressman, ran television ads in South Carolina, an early primary state.

The TV spot wasn't officially a campaign ad – since the PAC paid for it – but it shows just how early the presidential candidates are starting to spend on media for their campaigns.

By comparison, former Vermont Gov. Howard Dean — the first candidate for the Democratic nomination on the air in 2004 — put up his first ads in June 2003.

"You've essentially accelerated the advertising by a full seven months, and obviously, when you're on the air longer, you're going to be spending more money," says Evan Tracey, chief operating officer of the Campaign Media Analysis Group in Northern Virginia. The firm tracks political ads, including content, spending and placement.

Immersing Voters in Your Message

Tracey says campaigns are switching from the old-style TV blitz to a multimedia approach called "bracketing." With bracketing, you'll see ads on the TV morning shows, then hear them driving to work and get them on the Internet in the afternoon. The same message will also pop up on your car radio on the way home, on the TV evening news and as you watch TV that night.

"In sort of the remote-control TiVo world, it's harder to cut through" to voters, Tracey says. "So what you'll see is people trying to bracket consumers with the same message in all the different media options."

TV still costs more than anything else in a campaign. Some of the expenses are obvious: production and air time — which gets much pricier just before Election Day. There are less-obvious costs, too, such as lawyers to make sure the ads comply with campaign-finance laws.

As for other media, some outlets are fairly inexpensive, such as podcasts. But other communication costs – such as those for phone banks and automated telephone calls — will skyrocket, as big states move to hold their primaries early in the cycle.

Other costs not related to communications add up to just less than half of a typical presidential campaign budget, says Democratic strategist Tad Devine, who worked on Sen. John Kerry's '04 campaign.

"First, there's the spending that's occurring right now, which is the organizing of the campaign in some of the early states," Devine explains. "Second, moving the candidate around the country, and particularly to some of these early events. Third, putting together structures now that you'll use later in the campaign – a campaign office, a scheduling office, a huge fundraising operation."

And those fundraising operations will also have to grow as campaign budgets expand.

Even volunteers cost money. Nowadays, canvassers are issued handheld computers to log voters' responses as they go door to door. And that's just the beginning.

Political scientist John Green, who analyzed spending in the 2004 race, runs through the other costs associated with volunteers:

"There has to be a tremendous amount of intelligence gathered — polling, targeting information — so that the campaign can use those volunteers effectively. Money is required to recruit those volunteers. They have to be trained, and there have to be paid individuals to make sure they're directed to the right places at the right time."

And finally, there's the candidate. The campaign has to get the candidate out before the voters. In this primary season, those voters are scattered from New Hampshire to Florida to California.

Jack Oliver was finance director for the 2000 Bush campaign. He says that after all the media and technology, it is flesh-and-blood visits that can seal the deal between a candidate and voters.

"You want [voters] to feel it, breathe it, touch it and be engaged in it," he says. "That's why, at the end of campaigns, you see candidates out there working the rope lines, doing rallies all night long, going all over the country — because people want to touch and feel and see for themselves."

And that is why the big dollars being forecast for this year's presidential primary season don't surprise anyone who watches campaigns up close.

"Cumulatively, for the whole country, you're talking hundreds of millions of dollars to engage in that communication through the course of the year," says Democratic consultant Devine. "I would argue [that] $500 million or $750 million or $1 billion — believe it or not, we could have spent that, and spent it easily."