Accessibility links
Brainy Jazz Meets Gut-Level Expression George Benson helped kick-start "smooth jazz," that not-so-distant cousin of "easy listening." But before that, Benson's early records — including the spry It's Uptown, which he recorded at age 23 — are more musically adventurous. 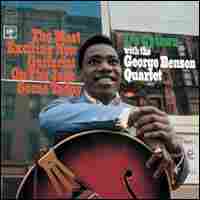 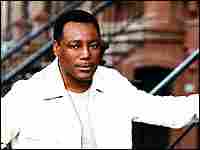 Benson is one of the few jazz musicians whose pop-friendly "crossover" works have been successful both critically and commercially. Are there others? Why is it so difficult to cross over from jazz to pop and maintain credibility?

George Benson's 1976 mega-hit Breezin' helped kick-start "smooth jazz," that not-so-distant cousin of "easy listening." It also neatly divides the guitarist and singer's career into Before and After: Benson had been recording for more than a decade when Breezin' lifted him into the stratosphere, and most of those early records — including this spry date, which he recorded at age 23 — are more musically adventurous. Not surprisingly, they're also mostly overlooked.

Benson grew up in Pittsburgh and got his first break playing in trios led by torrid organ virtuoso Jack McDuff. In those groups and others he co-led with organist Lonnie Smith, Benson became a baron of boogaloo, whose solos mixed grind-it-out blues phrases with sweet, disarmingly pretty melodies. John Hammond brought Benson to Columbia to record a test single, and by the end of the session, Hammond ordered a full contract and work on It's Uptown was underway. The song that so impressed Hammond, "Clockwise" (audio), is a blazing-fast bebop blues number that shows how ready this band was: Benson and baritone saxophonist Ronnie Cuber dance through the challenging theme without breaking a sweat. After that comes a series of short, ripping solos, rousing excursions that balance brainy jazz fingerwork against gut-level expression.

That balance distinguishes much of Benson's music from this period — particularly the romping, funky version of Marvin Gaye's "Ain't That Peculiar" (audio) and Benson's original "JH Bossa Nova," a lovely tune that was left off the original and serves as one of five bonus tracks on the remastered version. It's Uptown also offers a glimpse of Benson's future on several vocal cuts, including almost overly exuberant jazz-entertainer versions of "Willow Weep for Me" and "A Foggy Day" (audio). In terms of jazz singing, these aren't nearly as nuanced as the stuff Benson would record later, but they're full of fire, and that alone makes them notable. Somewhere along the way, Benson switched to the more muted — some would say anemic — rhythm approach that worked commercially. Sure, he gained fans, but the strutty It's Uptown suggests that he lost something essential, too.