Accessibility links
Supporters Deny Reports That Sadr Is in Iran Reports from Baghdad say radical Shiite cleric Moqtada al-Sadr has left Iraq for Iran. Several of Sadr's aides emphatically reject the reports, though none say exactly where their leader is.

Listen
Supporters Deny Reports That Sadr Is in Iran

Reports from Baghdad say radical Shiite cleric Muqtada al-Sadr has left Iraq for Iran. Several of Sadr's aides emphatically reject the reports, though none say exactly where their leader is.

The news comes as Iraqi forces involved in a new security plan have begun their crackdown. The overnight curfew in Baghdad is being extended by an hour and new checkpoints have tangled traffic across the city. And Iraq's prime minister, Nouri al-Maliki, says the government plans to close Iraq's borders with Iran and Syria for three days.

Sadr and his Mahdi Army militia — accused of involvement in sectarian violence — have come under pressure from the government's new security efforts. While Sadr remains on the government's "no-touch" list, Maliki has lifted his protection of Sadr's aides and militiamen. U.S. forces have recently killed or detained hundreds of Sadr associates.

Al-Sadr: A Complex Figure in the Iraqi Puzzle

Al-Sadr: A Complex Figure in the Iraqi Puzzle 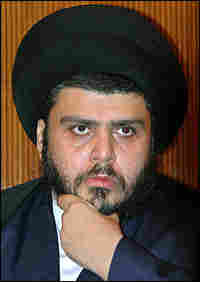 Shiite Cleric Muqtada al-Sadr has one of the largest militias in Iraq, the Mehdi Army, which has been involved in much of the sectarian violence in that country. Khaled Al-Hariri/Reuters/Corbis hide caption 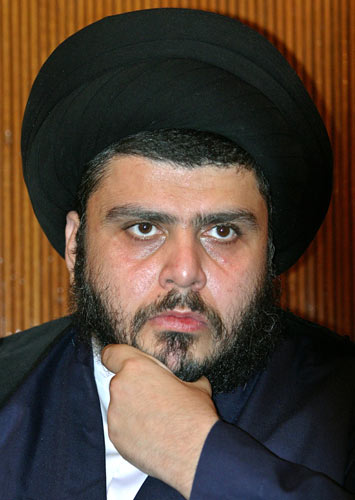 Shiite Cleric Muqtada al-Sadr has one of the largest militias in Iraq, the Mehdi Army, which has been involved in much of the sectarian violence in that country.

A handful of Iraqis who are constantly in the news may determine Iraq's future. Some of them are people whom the United States is depending on to help fix problems; others are ones the Americans hope don't make things worse. Anne Garrels helps navigate the way through the complexities of Iraqi politics and politicians.

The radical anti-American Shiite cleric Muqtada al-Sadr is one of the most powerful people in Iraq, and one of the hardest to understand.

He has one of the largest militias in Iraq, the Mehdi Army, which has been involved in much of the sectarian violence in Iraq, especially in Baghdad. Sadr himself says he opposes sectarian killings, but much of the violence aimed at Sunnis is carried out by people who at least profess allegiance to him.

He has deemed the American presence of Iraq an occupation and has repeatedly called for the immediate withdrawal of U.S. forces. His anti-American position is similar to that of some Sunni groups. Despite the killings of Sunnis carried out in his name, he did oppose the U.S.-led attack against Sunni insurgents in Fallujah in 2004. And he has reached out to Sunnis in the southern port city of Basra.

While Sadr pays lip service to the mainstream Shiite religious leadership based in Najaf, his base of power is different. It comes as a legacy of his father — the Grand Ayatollah Mohammed Sadeq al-Sadr — whose death (and that of Muqtada's brothers) the family blames on Saddam Hussein. The sprawling Shiite slum in northern Baghdad, Sadr City, is named for Muqtada's father. Muqtada built on that legacy by continuing to reach out to the poor and the disenfranchised in Iraq, and he is now wildly popular.

In many ways, he is copying what Hezbollah has done in Lebanon. His aides are in the community at the grass roots level providing basic social services, in a way that the mainstream Shiite establishment is not.

A nationalist, Sadr wants the United States out of Iraq, and for the country to be unified. However, his people are responsible for the ongoing sectarian violence which has driven Iraq into even greater chaos. An American general in Iraq says that Sadr has lost control of his militia, yet his movement does have secret courts where clerics under his auspices issue death warrants. Those decrees often target Sunnis who are perceived to be acting against Shiite interests.

Despite his radicalism — or perhaps because of it — Sadr has emerged as a key player in Iraqi politics. Members of his party control the largest bloc in the Shiite alliance in parliament. And it was his support that made Nouri al-Maliki prime minister. As a result, Maliki has defended Sadr, even when U.S. forces want to go after death squads acting in his name. In one case, Maliki forced the Americans to release a Sadr cleric who the United States believed was a key figure behind some sectarian death squads and lethal attacks on U.S. troops.

There is a growing consensus in the U.S. military that a direct conflict with Sadr and his militia is inevitable. There is also an attempt among other Shiite politicians to isolate Sadr, despite Maliki's support. It's a dangerous move. Sadr's forces, believed to be about 60,000 strong, could rise up throughout central and southern Iraq, leading to massive battles between the Mehdi Army on one side, and Iraqi and U.S. forces on the other.