Accessibility links
Galactic Gold: A Valentine Story : Krulwich Wonders... Ever wonder where the gold in your wedding ring came from? For Valentine's Day, Robert Krulwich tracks the rare element all the way to outer space, where gold is formed in the fiery center of collapsing stars. 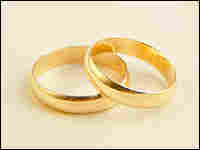 Gold is a rare, odd-numbered atom with 79 protons. Common atoms have an even number of protons. iStock hide caption 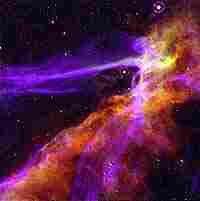 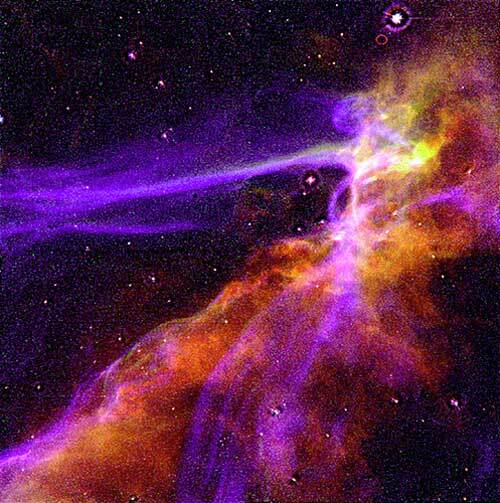 Supernovae, or collapsing stars, provide the extremely hot conditions necessary to create dense atoms like gold. The Cygnus Loop supernova (above), was a colossal stellar explosion that occurred 15,000 years ago. Atoms inside supernovae collide forcefully and create intense heat — hundreds of millions of degrees.

Ever wonder where the gold in your wedding ring came from? This Valentine's Day, we ask Neil deGrasse Tyson, director of New York City's Hayden Planetarium, to explain the history of the rare element.

According to Tyson, author of Death by Black Hole and Other Cosmic Quandries, all gold on Earth started out in the center of a star; he says stars are "in the business of cosmic alchemy."

When the universe began, there were only two kinds of atoms: hydrogen, which has one proton, and helium, which has two protons.

The problem was that hydrogen and helium couldn't combine to make a new kind of atom of three, four or five protons. The two atoms resisted each other because they were the same charge.

Unless, of course, it got very, very hot. How much heat would it take to get two protons to sit together?

About 10 million degrees, Tyson says. And that's where stars come in.

"It keeps going," Tyson says. "Carbon and oxygen and nitrogen and silicon, and [fusion] just plows its way up the periodic table of elements."

Carbon has six protons, nitrogen seven protons, oxygen eight protons. A hot star can cook all the way up to iron, a 26-proton atom. But that's where it stops.

"When you reach iron, nobody can do anything... It's dead matter. You can't fusion it. You can't fission it," Tyson explains.

Once a star has converted all its atoms into iron, it's out of fuel.

"That's a bad day for the star," Tyson says. "And at that moment, the entire star collapses, and in that collapse, the star reaches stratospheric temperatures and blows its guts to smithereens."

A collapsing star is called a supernova. The explosion is so powerful and cataclysmic that you can see it across the universe.

Supernovae outshine whole galaxies, because the atoms inside are colliding furiously, creating intense heat — hundreds of millions of degrees.

Only in a supernova is it possible to create atoms with 30 protons, 40 protons, 50 protons or even 60 protons. Nature prefers even numbers for stability, but every so often, the star will forge an odd-numbered atom, a real rarity: gold!

Gold is a rare, odd-numbered atom with 79 protons. For every single gold atom in the universe, there are 1 million iron atoms, Tyson says.

After the explosion, those few gold atoms are cast deep into the universe where they sit in empty space for eons. Eventually, some of the atoms may join a cloud. That cloud may condense into a planet.

Once inside a planet, some of the atoms may make it near the surface where we can come and dig them up.

So every atom of gold in your wedding ring was forged in a collapsing star, and then traveled across the universe to get to your finger. All the gold we wear and all the gold we give has made this same journey.

So how many miles and how many years are represented in a ring?

Calculating the path from several supernovae around our galaxy back to our solar system, Tyson concludes, all told, it's a journey of 3 million light years.