Accessibility links
NPR Oscar Contest Winners Take the Podium May I have the envelope please? The ballots have been counted in our Fake Oscar Speech Writing Contest. But picking just one winner seemed as churlish as Judi Dench's character in Notes on a Scandal. So we have lots. And the Oscar goes to... 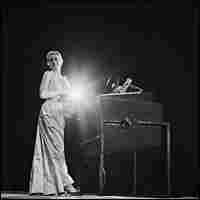 Grace Kelly stands at the podium after receiving the best actress Oscar in 1955. Corbis hide caption

Last month, we asked members of the NPR audience to put themselves in the shoes (and characters) of this year's Oscar nominees and imagine what they would say if they won.

We got so many worthy entries that picking just one winner seemed as churlish as Judi Dench's role in Notes on a Scandal. So the staff at NPR.org picked five winners, along with a few runners-up, and recorded them reading their entries.

As you will hear, our winners captured the spirit of the nominees' characters, if not always their accents. The speeches were limited to 200 words, about the length of an Oscar speech. But we didn't cut them off with an orchestra, and we didn't ask them who they were wearing. (After all, it's radio.)

Without further ado, the envelope please. And the Oscars for Best Fake Oscar Speech go to...

Submitted by Eileen Dorn, who listens to KCRW in Los Angeles

"I need my Oscar delivered to my penthouse suite, along with six-dozen white — and I mean pure white — roses. Leave the Oscar in the foyer.

But before you bring it 'round, I will need my dry cleaning picked up, my car cleaned with a toothbrush and baking soda, and my thank-yous rendered in the following order.

Actually, I choose to thank no one, since I, myself, am the only one worthy to receive this award. That will be all."

Submitted by Kim Stanford, who listens to WITF in York, Pa.

"To those of you who selected me, your Queen, as the recipient of this honour, I offer my gratitude. I should never have expected to be so honoured in my lifetime. Indeed, it is an honour that I could have easily forgone. I would have preferred that my performance during that disastrous week be forgotten, but to my surprise, someone believed a film should be made about it.

If only a certain person had not been so impetuous, none of this would have been necessary. Still, what's done is done and we must move on. I would like to dedicate this award to my family, my Corgis, my devoted servants, and, of course, you, my people. Without your concern, your sound bites on the telly, your holding up a mirror to myself, none of this would have been possible. Thank you. I will keep this with my most treasured possessions."

Submitted by Helen Flores, who listens to WERN in Madison, Wis.

"Well! It is a gold-star-day when my account of the affair is deigned worthy of recognition! You shameless, supercilious lot made the contentious choice, instead of selecting one of these instead:

Sarah (Kate Winslet) — a bored housewife and bad mother. How clever must one be for that tawdry, pedestrian tale?

Miranda (Meryl Streep), so posh in her saga, when fashion is by definition superficial. I was, however, struck by what a hard and bitter woman she is!

Raimunda (Penelope), supposedly illuminated the meaning of death in her unpleasant little story. But I too suffered true grief when my cat Portia died.

The Queen (Helen) –- a bit stiff, I think, with a distinct class advantage in this inane competition.

Now I have the prize. The others — half-naked, shameless women — smile insincerely, but they will not prattle on tonight. You shall not hear their self-serving speeches, their tedious, cloying "thank-yous."

I suppose you expect me to be grateful. Don't think for a minute that this makes up for all those times you betrayed my loyalty and my trust. I am a true friend. I know your secrets, and I deserve this.

What IS this statue – pot metal?"

Submitted by Kati Stevens, who listens to WUSF in Sarasota, Fla.

In the Voice of Mark Wahlberg as Dignam in The Departed

"I know what you're thinking, you California sons-of-lushes. You're wondering, 'Who's this guy?' I'll tell you. This is the guy who won the Oscar. That's right. Which means you must be the other guys. What I wanna know is what morons thought you lace-doily-wannabes belonged here? Huh?

You couldn't act your way out of your sister's bathrobe. Hey, Jackie Earle, why the hell you have two names, you girl? I bet you can't go to sleep at night until your mommy tucks you in and kisses your teddy bear goodnight. And Murph, Djimon, don't even think about touching my golden man. I know you like that sort of thing, but I swear I'll break both your noses with your pathetic little fists.

No, don't you play that wrap up music at me. You come down here and make me wrap up, see what happens. You crying, Alan Arkin? Little Miss Wets Your Pants is crying? Shut it.

In closing, I dedicate this award to all you Derek Jeter-loving NYPD TV actors: Enjoy your cappuccinos and keep one hand on your prostates, cause I'm coming for you, and this blunt instrument don't leave prints."

Submitted by Cleola Ratliff, who listens to WBEZ in Chicago

In the Voice of Jennifer Hudson as Effie White in Dreamgirls

(Singing) "And I am an Oscar winner!"

(Pointing into the audience)
"After tonight, you, and you, and you....you're gonna love me."