Accessibility links
The Love Story Deconstructed Anthropologist Chris McCollum asked dozens of married couples how they fell in love. No matter the circumstances, people invoked fate or romantic destiny as the reason. McCollum's conclusion: The cultural norm is to believe love is out of our control. 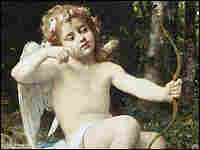 Anthropologist Chris McCollum has always been fascinated by how people tell their stories of falling in love. But when he told his friends he wanted to write a doctoral dissertation on the subject, they thought he was joking.

But the teasing didn't stop him. He pursued the research by interviewing dozens of married couples about how they fell in love. What he wanted to know was whether the stories people tell about how they choose their careers are similar to the stories they tell about finding a mate. He was drawing on research showing that people tell stories about intentionally pursuing a field or job.

But when it comes to finding a mate, McCollum found the stories to be very different.

"It was polar opposite," McCollum says. Love stories "are not a matter of determination or seeking," he says.

The stories people enjoy telling the most, he says, "are ones that really underscore the idea that something out of your personal control, something like romantic fate or destiny or chance meeting, is really what's at work."

Of course, not everyone tells a story of love at first sight.

"There's plenty of people who say phooey to that," McCollum says.

But when people really started opening up about their personal stories, they tended to fall into one of two categories. McCollum describes the first category as "romantics." They tend to believe that the external forces of destiny brought them to their beloved. On the other side of the spectrum are "realists," who tend to believe that random chance brought them together. Either way, both believe the process is out of their control.

I Wasn't Looking for Anyone

McCollum heard a lot of stories that started with, "I really wasn't looking for anyone," or "I was just planning on a night out with friends."

"We met at a Super Bowl party, and we'd never seen each other," says Richard Duncan. "I looked in her eyes, and I said, 'This is women I'm going to marry.' Her eyes were just incredible."

"Their story fits the cultural model quite well," McCollum says.

The Duncans' story was not analyzed as part of his research, but he says it's typical of what he found. It's almost as if people grow up hearing stories of romantic destiny, and they want their own love story to fit the cultural norm.

McCollum says people don't bog down their stories with facts, particularly details that aren't too romantic. Take, for instance, two other couples in McCollum's study who met through classified personal ads. He says that when they tell their stories, they hardly mention it.

"They really discount the role the ad played, even though it played a very central one," he says. He didn't find that people lie about their stories, but rather they tend to emphasize parts of their stories that suggest they were meant to be together.

The Magic of Love

Helen Fischer, an anthropologist from Rutgers University who also studies love, says it's no surprise that couples tell these stories. After all, she says, there does seem to be magic involved. She says finding the "right person" takes more than just your desire to find them.

So when people do fall in love, they hold on to their romantic stories. Fisher points to research that shows that when people believe they're with the person they're meant to be with, they also report happier marriages.

"So no matter who you marry, if you believe it's the right person," says Fisher, "you will be happier."

Much to his friends' surprise, McCollum published his research in Ethos, a highly regarded anthropology journal. And, he says, as much time as he has spent analyzing stories of love, he's still not jaded. And he doesn't pretend to be rational about the love of his life.