Accessibility links
U.S. Troops on Baghdad Job Doubt Iraqi Allies A five-fold increase in U.S. troops has targeted an area of Baghdad where sectarian violence was rife and a predominantly Shiite police force was closely linked with Shiite militias. U.S. troops say the role of Iraqi police remains a problem. 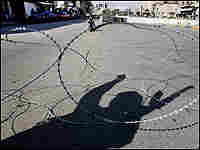 The shadow of an Iraqi soldier falls across barbed-wire as he mans a checkpoint in central Baghdad. Ahmad Al-Rubaye/AFP/Getty Images hide caption 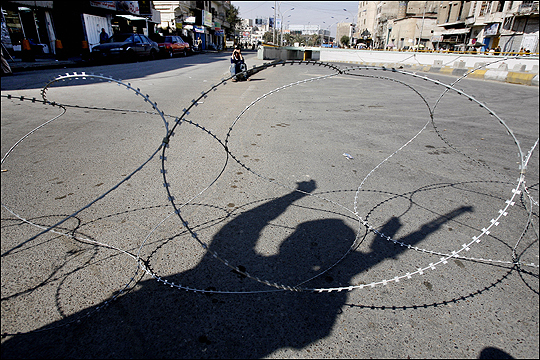 The shadow of an Iraqi soldier falls across barbed-wire as he mans a checkpoint in central Baghdad.

The Baghdad neighborhood of Dora has it all — Shiite militias, Sunni insurgents and an American battalion stuck in between. In this area of southern Baghdad, the troop "surge" actually began about six months ago.

That's when a Stryker squadron from Fort Lewis, Wash., replaced two platoons — bringing five times as many American troops to the violent neighborhood. But the squadron's partners, the Iraqi national police, have turned out to be one of the biggest problems.

Every morning before they go out on a joint patrol, soldiers from the first squadron, 14th Cavalry, put their partners from the national police through a training session.

At a shooting range, the Americans review the basics — rules of engagement and weapons safety.

"Hey, this guy's a stud, man, he was shooting good," one soldier says admiringly of an Iraqi policeman.

Sgt. Eric Evans says it's slow work, but paying off.

"They have a tendency to shoot first and ask later, and we're trying to get them to the point where they identify their targets, engage accurately, if need be with deadly force."

When the squadron commander Lt. Col. Jeff Peterson took over South Dora, he could not trust the predominantly Shiite police battalion. Evidence linking them to Shiite militias was overwhelming. And his troops had to watch their own backs.

"In many cases, we felt like the national police were targeting us," he said.

Peterson arrested seven police officers he suspected of being behind murders and kidnappings, particularly of Sunnis. They likely weren't the only ones involved, but he thinks the arrests did send a strong message.

"The (Iraqi) commander and I had some difficult times. After these officers were arrested, I basically went to him, and told him that we would continue to monitor the activities of his battalion. That my desire to partner with him, my desire was to make this battalion as good as I possibly could make it, but at the same time, we were going to be watching."

His officers have to be careful about what information they give the police, especially when going after Shiite militias with whom the police have close ties.

"We had to conduct operations in such a way that we maintained security until the very last minute," Peterson said. "We had to be very careful about disclosing the targets, and our routes to the targets. So, I mean, it's a tough, tough circumstance to be in."

Peterson has banned the Iraqi police from carrying cell phones on operations so they can't make calls that could compromise a mission.

Relations between the Shiite police force and the Sunni population were so bad that Peterson decided to lock the police out of a key Sunni neighborhood.

"I thought, given the situation where there was so much distrust, we just had to separate them for a while."

The results were immediate.

"Murders went down, mosque attacks went down," Peterson said. "So, immediately, there was a sense of relief amongst the population — that they were no longer going to be subjected to national police running around, and essentially, terrorizing the people."

Now, when the police are in Sunni neighborhoods, they are always accompanied or monitored by U.S. forces.

Col. Peterson says the increase in U.S. troops made a huge difference. They are able to cover much more territory, get better information on both Sunni and Shiite threats, and monitor the police more closely. But Lt. Steve Harnsberger says it means his soldiers are doing a double job.

"We're trying to control our own elements, but also national police. It seems to take a little bit away from our capabilities, and puts more stress on the squad leaders and the individual men."

As a joint patrol starts house searches, Lt. Courtney Dean crosses his fingers. This time, it all goes well.

The joint patrols are as much a public relations campaign as a military operation. Sunni families say they don't have confidence in the police yet. But they are no longer afraid, as long as the Americans are with them.

Sgt. Mike Sheeder, who has taught himself Arabic, believes the partnership with the police platoons is having an impact, because forming relationships with some of the Iraqi officers creates peer pressure within their ranks against abuses.

They've found weapons here before, and suspect there's a false floor in it, or one of the other abandoned houses which Sunni insurgents use as weapons storehouses.

It turns out there's nothing but dirt under the floor tiles.

But outside, they come across two suspicious-looking cars riddled with bullet holes.

Inside a red Ford, the troops find a bag with more than 500 rounds of ammunition.

"This is PKC ammo, it's a 17.62 mm machine gun, it can fire a high rate of fire, and it's a pretty common weapon used by insurgents," explains Capt. Adam Grimm.

The Iraqi police try to move the cars out of the area by hot-wiring them and driving them away.

They're also skilled when it comes to going after Sunni insurgents. The challenge is to get them to be as active against Shiite militias. Overall, Peterson has seen improvements.

But he added, "They are not ready to conduct independent operations yet. I don't know exactly how long it's gonna take."

Because of that uncertainty, Sgt. Eric Evans says soldiers from the Stryker squadron suspect their time in Baghdad will be extended.

"A lot of them are planning weddings" for after their return, Evans said. "If they say stay, you know, we'll stay, we'll do our jobs just the same. But they just want to know, hey, are we staying or are we going?"