Accessibility links
China Prepares for 'Golden Pig' Baby Boom China struggles to prepare for a baby boom as it ushers in the especially lucky "golden pig year." But could that supposed luck turn into a curse? 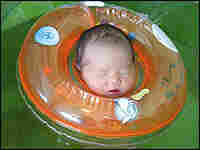 China is expecting a baby boom this lunar year — the year of the pig, according to the traditional Chinese calendar. Here, a newborn bathes at a maternity hospital in Shanghai, where it's believed swimming with the aid of a rubber ring calms the babies. Louisa Lim, NPR hide caption 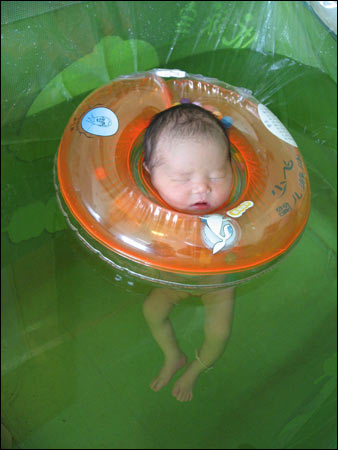 China is expecting a baby boom this lunar year — the year of the pig, according to the traditional Chinese calendar. Here, a newborn bathes at a maternity hospital in Shanghai, where it's believed swimming with the aid of a rubber ring calms the babies.

China may be celebrating the year of the pig, but the barnyard-animal-of-honor is being edged out of the festivities. Scroll down to find out why. 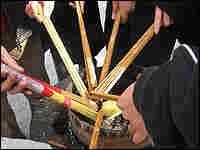 Worshippers light incense sticks as they make offerings at a temple in Shanghai. Many Chinese like to visit the temple at Lunar New Year to make a good start to the year. Louisa Lim, NPR hide caption

In China, city-dwellers are only allowed one child, so many are timing their pregnancies according to the traditional lunar calendar to promote the most auspicious birth. Some newspapers have called 2007 an especially lucky "golden pig year," which only comes around every 60 years. And that is spurring a baby boom.

Bao Huiyuan, 30, is expecting her first child in June. "They say children born in the year of the pig will be especially intelligent and healthy, so everybody is rushing to have babies this year," she says.

The baby boom is leading to fears of a labor shortage. At Huiyuan's company, about 10 percent of her department will give birth this year.

In Shanghai's hospitals, heavy-bellied women are lining up to see doctors. The city's maternity beds are booked solid until March.

The city government has even stepped in, warning women to try to avoid getting pregnant this year. As Huiyuan points out, these piglets will compete for hospital beds and go on competing throughout their lives — for school places, university places and eventually, wives.

Some say that the media doesn't understand Chinese fortune telling, and that the golden pig year craze is just hype.

Still, commercials for baby products are taking up double the air time, and companies are preparing for bumper sales.

Outwardly, China may be changing unbelievably fast, as skyscrapers sprout and farmland is gobbled up by ever-expanding cities. But beneath a modern veneer, traditional superstitions run deep. 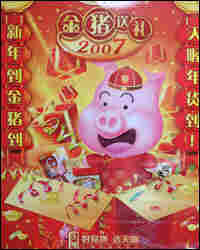 A commemorative bag from Tenwow in celebration of the Chinese New Year. The bag features a cartoon pig used to advertise the company's snacks. Louisa Lim, NPR hide caption 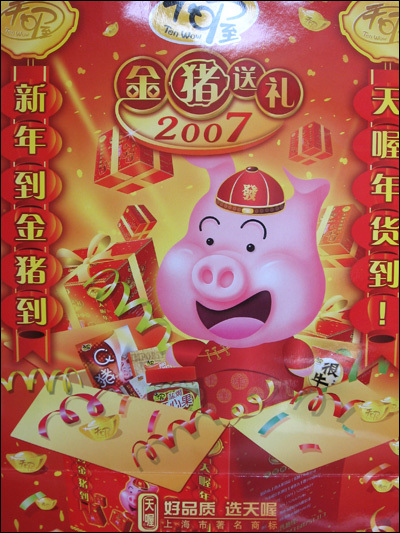 A commemorative bag from Tenwow in celebration of the Chinese New Year. The bag features a cartoon pig used to advertise the company's snacks.

China's preparing for the year of the Pig, an especially auspicious year which begins on Feb. 18. But the run-up has been anything but lucky for pork fans. Pigs have been banned from appearing in any ads on the state-run broadcaster, CCTV, after an order that is now surrounded by confusion.

The order means that ads for consumer treats such as sausage snacks have been yanked from airing. A brand manager for Tenlow snacks says ads for his company's pork snacks deliver positive messages.

"Both adults and children believe pigs are a lucky symbol, which bring fortune and wealth," Tenlow's Wu Ying said. "Their plumpness means prosperity."

This cartoon pig used in Tenlow's ads would hardly seem subversive. But CCTV has ordered major advertising agencies not to use pig images, cartoons or slogans "to avoid conflicts with ethnic minorities." That's a reference to China's 20 million Muslims, about 2 percent of the country's population.

At a popular mosque in Shanghai, there's general approval of the ban. Given the Muslim taboo on pigs, these believers say that seeing pig images on TV would make them feel very uncomfortable.

Even big multinationals are aware of the sensitivities. A Coca-Cola ad features a cute, Babe-like piglet braving mean city streets to get home for the Chinese New Year. But the company shot a second version using pandas to show in Muslim areas.

For those who didn't take such measures, economic losses beckon.

"It is really messing with people's commercial activities," said Paul French, Access Asia's China representative. "It'd be like [in] the second week of December telling people, 'You can run whatever advertising you want, but no images of Father Christmas.'"

French said he's received the edict but, to confuse matters, not everyone's been given the same orders.

"Some people are told 'No live pigs, but you can have animated or cartoon pigs,'" French said. "And some people say 'No pigs whatsoever.'"

To add to the confusion, one agency told NPR that the pig ban had subsequently been relaxed, while others say it's still in place. CCTV refused to grant an interview on the pig ban.

Whatever the situation, the thinking behind the ban is telling.

"The underlying reason goes to the very core of what it is Chinese government views as its patriarchal responsibility to maintain harmony of the entire society," said Tom Doctoroff, China CEO for the JWT advertising agency.

Doctoroff says it can be difficult to predict what might fall foul of the censors.

"We one time had a Pizza Hut ad ... [where] we had this kid standing up on a desk and extolling in fulsome tones the glory of the pizza to attract the other kids," Doctoroff said. "This ad did get censored because the child, the student, the 8-year-old, was viewed as an alternative center of authority."

Other no-nos include using religious figures, for example Buddhist or Taoist monks. And national icons like the Great Wall should be treated with caution. Paul French said edicts — like one issued last year about dragons — should be viewed against the backdrop of China's rising power.

These orders perhaps mirror how the Chinese government would like to see itself: as the protector of minority groups, the guardian of national icons and the ultimate arbiter of harmony. But that role may no longer be possible.

A tune called "the pig song" shows why. It's devoted to describing the pig's dripping snout, its curly tail and its big ears. Posted on the Internet two years ago, it became a surprise hit, it was downloaded a billion times. Even if Beijing had wanted to ban it, modern technology — in the form of the Internet — would have made that impossible.

From the outside, China's government might appear monolithic. But the saga of the pig ban shows how it's struggling with multiculturalism, riddled with insecurity and beholden to commercial pressures, as perhaps never before.