Accessibility links
SATs Not for Everyone, But Reality for Most A growing number of liberal arts colleges are making standardized tests optional for their applicants. That's good news for the SAT's critics, who have long alleged that the test underpredicts the performance of minorities. But some say the test still has a role to play in college admissions.

SATs Not for Everyone, But Reality for Most

SATs Not for Everyone, But Reality for Most 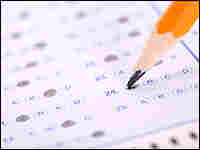 Some schools may have gotten rid of standardized tests, but for many high school students, the SAT and ACT are still a necessary part of the admissions process.

So make the most of it. Learn more about which test might work best for you.

Like many high-school students, Danielle Rettinger took the SAT twice but still wasn't satisfied with her score. It wasn't that she had performed poorly — far from it. But she felt that the score did not measure up to the rest of her academic performance.

"I don't think it represented me as a student," she says.

That's partly why she was attracted to Bates College in Lewiston, Maine. Bates doesn't require applicants to submit standardized test scores at all. So when Rettinger dropped her application in the mail, she didn't have to worry that the admissions panel would dismiss her four years of academic success because of one score — a score that she says is immaterial a few months later, anyway.

"Most people don't remember their SAT scores once May comes around and you know what school you're going to. [It's] not really something that comes up," she says.

The debate about the utility and predictive abilities of standardized tests is not new. The College Board — which is responsible for creating and administering the test — notes that the SAT is an important tool for colleges as they wade through thousands of applications and try to account for varying degrees of grade inflation. 'Yardstick' is a term routinely used in the test's defense, though the College Board has shied away from that word in recent years.

The Argument Against Standardized Tests

But some critics question the power of standardized tests to uniformly assess student performance.

"What it measures is how well you take the SAT," says Robert Schaeffer of Fair Test.

Groups like Fair Test campaign against the SAT. They allege that it consistently under-predicts the performance of women, African-Americans, people whose first language isn't English and generally anyone who's not a good test-taker.

Fair Test keeps a list of schools that have dispensed with the standardized testing requirement. Currently, that list includes 734 schools, 28 of which are ranked in the top 100 liberal arts colleges in America by U.S. News and World Report.

Schaeffer says that Fair Test has a strict definition of what constitutes a non-SAT school. Inclusion on the list requires that the college be an accredited, bachelor's degree-granting institution at which a large chunk or all of the applicants aren't required to submit standardized test scores.

Mount Holyoke and the University of Texas at Austin have joined the list in recent years. Bates College made the decision to drop the SAT requirement over 20 years ago. Wylie Mitchell, the dean of admissions at Bates, says that academic performance has not changed as a result of that decision.

"We could cross the quad and four out of 10 people we meet would be non-submitters," he says, adding that the difference in graduation rates between those who submitted their scores and those who didn't is 0.1 percent.

Making the SAT optional may have made admissions fairer at Bates, but it certainly hasn't made acceptance any easier. The school's applicant pool has nearly doubled since it dropped the score-requirement, and Mitchell says that Bates does require additional writing samples and recommends a personal interview. Those who do choose to submit their score are by no means given preferential treatment. Within each student's admissions folder, the score doesn't appear until the middle third — after all the high-school academic records. That way, the score has less impact on the panel's first impression.

"I would say mostly it's a confirming credential. If it's not there, we don't think less of the student," says Mitchell. "We just move onto the next piece of information."

However, taking all of the extra materials a student submits into account is time-consuming. This year, Bates expects a record number of applications; Mitchell says that admissions counselors normally wind up reading each one cover to cover, multiple times.

But 16,000 or more applications is the reality for many larger universities. Without the SATs as a guide, admissions officers could get buried in the avalanche of applications.

"It's just this blizzard of paper," says Ned Johnson. He runs Prep Matters, a Washington, D.C.-based firm that trains students in the art of standardized testing.

Johnson thinks it's feasible for some schools to put together an exemplary student body without standardized test scores. But he points out that as more students apply to more schools, having a score to put with a GPA can help busy admissions counselors make the most of their time. That's one reason why the majority of colleges and universities will continue to stick with standardized tests for the foreseeable future.

If You Have to Test, Choose Wisely

In recent years, the ACT — an alternative to the SAT — has become more popular and widely accepted as a college entry exam. Some students who perform poorly on the SAT find success on the ACT. Johnson says that nearly half of the students that come to Prep Matters now take the ACT, at least just to see how they do.

"It's a more straight-forward test," he says, "and some people think, maybe, that there's not as much trickery."

The ACT isn't as long as the SAT and includes fewer sections, so it's potentially less stressful for some students. A few years back, college admissions offices started taking the ACT more seriously as a substitute for the SAT.

But the SAT isn't the same as it used to be, either. Two years ago, the College Board revamped the reading comprehension questions and added a writing section. But Johnson fears the writing section may only serve to lengthen the test. He takes the exam himself, whenever possible, and admits that even he has trouble completing the timed essays — which always appear first on the exam.

"If people aren't happy with their essay at the beginning," he says, "it can rattle a student for the rest of the test."

Should You Take the SAT or the ACT?

Some colleges may no longer require standardized test scores, but for most high-school students, test-taking is still a reality. Here's some advice that might help you decide which test is best suited to you.

The SAT may be a better test for you if:

2. You have a killer vocabulary. You know "didactic," "sedulous" and other esoteric words (including esoteric) and want to use that comparative advantage.

3. You can ace grammar. In addition to the essay section, the Writing section of the SAT tests the deviation between standard written English and the way we actually speak the language. You know that "everyone has their own idea" is wrong, and you are comfortable with "On the table, there ARE a pencil and some paper."

4. You find it easier to write essays that use illustrative examples rather than argument. For example, if a topic such as "Should the rights of the individual be secondary to the good of the community?" seems like an easier topic to write on than "Should students be required to participate in extracurricular activities?" then the SAT essay may be more your speed. In the former example, you can use anything from the Civil Rights Movement to The Scarlet Letter as evidence, while the latter likely begs more for examples from personal experience or abstract arguments.

5. Whether or not you're academic, you consider yourself quick-thinking. At some level, the math section of the SAT is based on reasoning. The reading section is about seeing things the same way as the test-makers. The official name is, after all, the "SAT Reasoning Test." The hardest math questions on the SAT are not about advanced content or formulas that you may have forgotten.

6. You are high-energy or impulsive to the point of being impatient. Comprised of nine sections and an essay, the SAT is 20 minutes longer than the ACT, which is comprised of four long sections followed by an essay. But there are more starts and stops on the SAT — which makes it feel as though it's moving along faster than the ACT.

7. All of your friends are doing it. For many folks, the SAT is a rite of passage and is the common yardstick people use, for better or worse, in comparing their scores to the scores of their friends, parents and siblings. The whole drama of high school wouldn't be complete without it.

The ACT may be a better test for you if:

1. You did great on the PLAN (the "PSAT" for the ACT) or had a PSAT or SAT score inconsistent with your academic performance in school.

2. Your vocabulary is not as strong as your reading. You read well and relatively quickly. Arguably, the ACT is a test that is three parts verbal — English, Reading and Science (the latter section requires no knowledge outside of what the test presents).

3. You are great at writing papers but haven't had formal grammar instruction. The English portion of the ACT is more a test of punctuation and sentence and paragraph structure. Many students find the English to be common sense, much like proof-reading a paper.

4. You prefer to write essays that are argumentative, persuading with ideas even if you lack perfect recall of facts and figures. Or you prefer to answer questions that ask about everyday issues in your life or school.

5. You fear you will choke under pressure. The ACT effectively has "score choice." If, when you register, you do not indicate schools you want to receive your scores, you can wait until you have taken the ACT several times and then select the best scores to send. On the SAT, all scores (SAT and SAT Subject Tests) will be part of your score report. You cannot "hide" a low score on the SAT as you can on the ACT.

6. You are more academic than "test savvy." The ACT seems to most people to be more curriculum-based and thus more straightforward. There is more advanced math content (logarithms, trigonometry, conic sections, etc.), but it seems more like a regular test you might encounter in school.

7. All of your friends aren't doing it. You dread telling people what your scores are, imaging that they are immediately making judgments about how you "stack up." Tell your friends you have a 580-620-590 on the SAT, and the ranking begins. Tell them you got a 27 on the ACT, and they'll ask "is that good?"