Guillermo del Toro's beautiful and grotesque fantasy, "Pan's Labyrinth," begins in the dismal reality of Franco's Spain. Ofelia, a curious young girl with a penchant for fairy tales, goes to live with her new stepfather, a vicious nationalist. On the way to his house in the car, she's distracted by a very strange-looking insect - a fairy.

CONAN: Nominated for six Academy Awards, including Best Foreign Language Film and Best Original Screenplay, "Pan's Labyrinth" recently walked away with a BAFTA award - the British version of the Oscars - for best film not in the English language. Joining us now from the BBC studios in London is director, writer and producer of "Pan's Labyrinth," Guillermo del Toro. Thanks very much for being here today.

CONAN: And if you'd like to ask Guillermo del Toro a question about his films, his experience with the movie business or his Oscar nominations, give us a call: 800-989-8255, or zap up an e-mail: talk@npr.org. And Guillermo del Toro, you've said in interviews that "Pan's Labyrinth" - particularly the experience of young Ofelia - is autobiographical. What are some of the parallels between your childhood and Ofelia's?

Mr. DEL TORO: Well, I think that many of them, including the fact that I was -in many of the direst episodes of my childhood - saved by imagination, saved by magic, because I believe that magic and imagination create a spiritual reality. And in my opinion, a spiritual reality, that is as strong as a religion because they give you strength in times of trouble. And they give you a sense of another dimension other than just the material world. So I really experienced many of that type of passages.

CONAN: Magic, you say, in your childhood - and imagination. Was there a moment when you stopped believing in magic?

Mr. DEL TORO: No, no, no, but I actually think that - I jokingly say that I've spent 32 years trying to recuperate from my first 10.

Mr. DEL TORO: Because it really - is not the magic that ceased, but actually once you become a teenager, you start getting sort of a grasp - a better grasp, on the real world on how to deal with it. And the magic has never evaporated from my life because I do believe in things that have nicer-sounding names like synchronicity, for example, and the Unicist theory and so on an so forth. But ultimately, it's still magic.

CONAN: And you've also said that you believe in monsters, or at least did. And interestingly, your faun - the Pan of the film, it's not quite the right word -but the faun, F-A-U-N, the faun is a little bit of both, isn't it?

But I wanted him to be a character that you're on the fence about, that you are not sure that the heroine of the film can trust or not. And it also comes from an autobiographical episode, funny enough. I used to have what psychologists call lucid dreaming.

I used to wake up as a child in the exact same bedroom I was actually dreaming in, and I would see creatures in that bedroom without a sense of it being a dream - none of the surreal elements of a dream except for one. And this faun that appears in the movie came very often at night in one room in my grandmother's house. It came from behind my grandmother's armoire exactly at midnight in my lucid dreaming. And I would start screaming and be rescued from that bed. So there you have a very incredibly surrealistic autobiographical element.

CONAN: We're talking with Guillermo del Toro, the writer, director and producer of "Pan's Labyrinth." He's in London now as we speak, but I guess on his way to Hollywood because his film has been nominated for six Academy Awards. Are you looking forward to the trip?

Mr. DEL TORO: Very much so. I actually - we came into the BAFTAs not expecting anything - just having a good time in London - and we came out with three BAFTAs, one for myself and another one for makeup and wardrobe design.

CONAN: Congratulations. We're speaking with Guillermo del Toro. You're listening to TALK OF THE NATION from NPR News.

And let's see if we can get some callers on the line. This is Kim. Kim's calling us from Missouri.

KIM (Caller): Hi. I just wanted to say first of all that I really liked the film. I thought it was great. But I did have one concern and wanted to get your feedback as far as the use of some pretty graphic violence, because that was really my only issue with the film, that I really have a weak stomach. And I didn't understand a couple of the scenes where it was just really grotesque, kind of in your face, and I just wanted to…

CONAN: Are you talking about the torture scenes, Kim?

KIM: Not even that. In the beginning, where the villain of the film like essentially bashes the guy's face in, and it's shown pretty much right on. So I was wondering what was, you know, the point behind the violence of the film.

And, for example, in the Spanish Civil War, out of 500,000 people that died, it is calculated that about half of that - 250,000 people - were not casualties of war. They were summarily executed or tortured and killed in almost a civilian way by both bands.

Mr. DEL TORO: That very term defines a lot of their subtlety or not. They were absolutely - most of the violence in the film is taken from episodes that were recorded as oral accounts of torture or brutality exerted against civilians, as I say, from both bands.

It's a - war doesn't bring the best in anyone. And I think in a world like ours where war gets sanitized in the news and in the film so much, it was my intention to show the civilian interaction absolutely in a way that is not meant to be spectacle, not meant to be arousing violence like in an action film, but to be absolutely heart-wrenching.

KIM: Okay, well thank you. I really like the film. Thanks for my call.

CONAN: Thanks for the call, Kim.

CONAN: Here's an e-mail we got from Hank Walters.

I read that you turned down directing the Narnia movie on religious grounds. Did the end of "Pan's Labyrinth" reflect your view of the afterlife or lack of afterlife? He adds: I love the movie, but I had to wait before I left the theater to make sure I didn't have tears in my eyes.

I always wanted to make, do a riff on the fantasy genre and the fairy-tale genre. And what the movie tries to say, in my mind, is that the internal reality is as powerful - if not more powerful - than the physical reality.

CONAN: Here's another e-mail question, this from Benjamin in - in Healdsburg, excuse me. I enjoyed "Pan's Labyrinth" so much, I saw it twice. I'm interested to find out if the ghoul without eyes sitting at a table fit for a king is supposed to represent the Spanish monarchy during the Spanish Civil War. Is there any particular fairy tale upon which the movie is based?

Mr. DEL TORO: I've been collecting fairy-tale books all my life. And right now, I have a couple hundred volumes at home, mostly Victorian-published books that are profusely illustrated by Arthur Rackham or Edmund Dulac and so forth.

And the idea behind that is that it represents a type of faceless power. You can evoke a certain church or organized religion, or you can evoke fascism or evoke a totalitarian power, whichever you wish. I think that symbols, you can ascribe a particular value to it, but it's better to leave them open in order for them not to become simple ciphers.

So symbols in the movie are used both carefully coded, which I do. I spend a lot of time coding the symbols in the film, but then I leave them open for - I don't close them into a single interpretation.

CONAN: Guillermo del Toro, thank you very much. We've just got a few seconds left, but I have to wish you and your fellow Mexican directors - it's clearly the year of the Mexican director - good luck on Oscar night.

CONAN: Guillermo del Toro is director, writer and producer of the six-time Academy Award nominated "Pan's Labyrinth," and he joins us today from BBC studios in London. If you'd like to see photos of the strange world of "Pan's Labyrinth" or watch the trailer for the film, you can go to our Web site at npr.org. This is TALK OF THE NATION from NPR News. Ira's here tomorrow with SCIENCE FRIDAY. We'll see you Monday. I'm Neal Conan in Washington.

Guillermo Del Toro on the Real Life of Fairy Tales 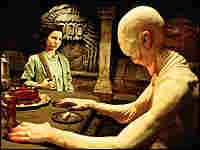 Ivana Baquero stars in Pan's Labrynth as Ofelia, a young girl who falls into a strange and dangerous world full of fairies and scary, odd creatures. Teresa Isasi/Picturehouse hide caption 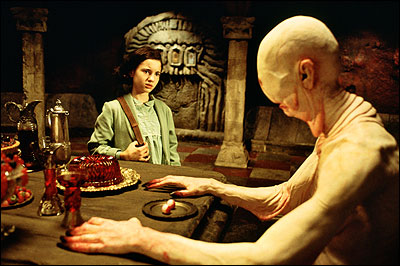 Ivana Baquero stars in Pan's Labrynth as Ofelia, a young girl who falls into a strange and dangerous world full of fairies and scary, odd creatures. 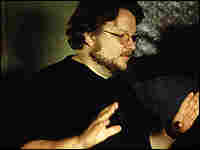 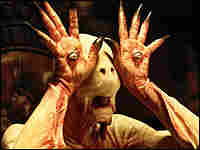 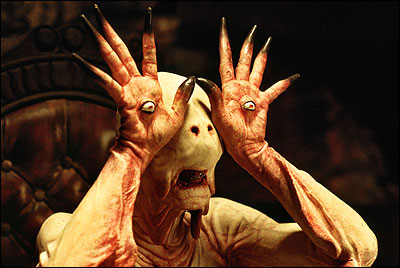 Director Guillermo del Toro is no stranger to the grotesque and the fantastic.

His past films includes the vampire flick Cronos and the comic-book adaptation Hellboy. His latest movie, Pan's Labyrinth, is a dark and dreamy fairy tale that earned six Oscar nominations.

Del Toro sets his film in a remote mountain outpost in Spain in 1944, in the aftermath of the civil war. It stars Ivana Baquero as Ofelia, a young girl whose father is dead and whose mother is pregnant with her new husband's baby. That husband is Captain Vidal, a brutal captain in Franco's army, who ignores his new wife and stepdaughter and is interested only in his unborn child.

As Vidal ruthlessly hunts down anti-Franco guerrilla fighters, Ofelia escapes from her dreary reality into an equally dark fantasy world, full of strange and scary creatures.

Del Toro, who grew up in Mexico, has always been absorbed in horror films and fairy tales, which he sees as just another way for humans to understand their world.