Accessibility links
Environmentalists Weigh In on Ethanol President Bush has pledged to reduce United States gasoline usage by twenty percent. But some environmentalists are lukewarm about the replacement fuel Bush is backing: ethanol. They question the practicality and sustainability of the corn-based fuel.

Environmentalists Weigh In on Ethanol

Environmentalists Weigh In on Ethanol 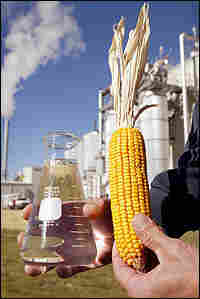 During last month's State of the Union address, President Bush made it a federal goal to reduce the United States' gasoline usage by 20 percent during the next 10 years. It seems an environmentally friendly goal: Vehicle emissions are responsible for one-third of carbon emissions in the United States.

But some environmentalists are lukewarm about the replacement fuel Bush is backing: ethanol. They question the practicality and sustainability of the corn-based fuel.

Corn ethanol is presently the only commercially viable means of ethanol fuel production. It's made by distilling fermented simple sugars derived from corn. The problem is, it's still an environmentally taxing process.

"With ethanol, the devil is in the details," says Dan Becker. "There are ways of making it that are quite clean, but that's not the way we're doing it."

Becker backs cellulosic ethanol. If researchers can streamline what's still an experimental process, then ethanol could be made from a variety of plant materials.

The benefit of that, Elizabeth Marshall says, is that cellulosic ethanol production would allow farmers to grow crops that work in their area, rather than forcing corn on lands that are not well-suited to support it.

A Decrease in Greenhouse Gases?

Some environmentalists also question whether corn ethanol will ultimately help combat global warming. Dan Becker says it's necessary to take into account the energy expended to produce the fuel.

"The way we make ethanol now," Becker says, involves "seven passes over the field with a diesel tractor, heating the corn to convert it into ethanol, and transporting the fuel in diesel-guzzling trucks."

Marshall estimates that producing 15 billion gallons of corn ethanol – less than half of Bush's projected goal for 2017 – would increase greenhouse gas emissions from agricultural production by almost 8 percent.

Furthermore, Becker states, ethanol has a lower energy content than gasoline, so to meet the same energy demands, more gallons of ethanol would have to be produced.

A problem often cited with ethanol is that, when the production process is taken into account, it will ultimately release more greenhouse gas than gasoline. Becker says more recent studies show that's not the case. Overall, he says, corn ethanol isn't a loser but, "it's not a big winner, either. The best thing that we can say about ethanol is that it is not gasoline – and that is damning with faint praise."

Elizabeth Marshall worries that attempting to curb greenhouse gases with increased corn ethanol production will ultimately come at the cost of the country's water and soil.

"Soil erosion, nutrient runoff, and pulling new land into corn production are all concerns," she says.

To meet the increased demand for ethanol, many farmers want to bring into use lands that are currently protected. Marshall also predicts that higher corn prices will give farmers incentive to revert to environmentally unfriendly practices.

Farming's environmental footprint has always been a concern, says Marshall. "Increased demand for ethanol will only exacerbate existing problems."