Accessibility links
CFL Bulbs Have One Hitch: Toxic Mercury Wal-Mart wants to sell 100 million compact fluorescent light bulbs this year. The bulbs save energy and reduce emissions of the greenhouse gases that add to climate change. But there's a hitch: Each bulb contains about 5 milligrams of mercury, a toxic heavy metal. The EPA says they should be recycled. 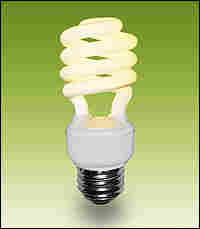 Scroll down to read advice from the EPA and Energy Department on what to look for in a CFL — and get a home energy calculator.

The Environmental Protection Agency and some large business, including Wal-Mart, are aggressively promoting the sale of compact fluorescent light bulbs as a way to save energy and fight global warming. They want Americans to buy many millions of them over the coming years.

But the bulbs contain small amounts of mercury, a neurotoxin, and the companies and federal government haven't come up with effective ways to get Americans to recycle them.

"The problem with the bulbs is that they'll break before they get to the landfill. They'll break in containers, or they'll break in a dumpster or they'll break in the trucks. Workers may be exposed to very high levels of mercury when that happens," says John Skinner, executive director of the Solid Waste Association of North America, the trade group for the people who handle trash and recycling.

Skinner says when bulbs break near homes, they can contaminate the soil.

Mercury is a potent neurotoxin, and it's especially dangerous for children and fetuses. Most exposure to mercury comes from eating fish contaminated with mercury,

Some states, cities and counties have outlawed putting CFL bulbs in the trash, but in most states the practice is legal.

Pete Keller works for Eco Lights Northwest, the only company in Washington state that recycles fluorescent lamps. He says it is illegal to put the bulbs in the trash in some counties in Washington, but most people still throw them out.

Experts agree that it's not easy for most people to recycle these bulbs. Even cities that have curbside recycling won't take the bulbs. So people have to take them to a hazardous-waste collection day or a special facility.

The head of the Environmental Protection Agency program concedes that not enough has been done to urge people to recycle CFL bulbs and make it easier for them to do so.

"I share your frustration that there isn't a national infrastructure for the proper recycling of this product," says Wendy Reed, who manages EPA's Energy Star program. That programs gives the compact bulbs its "energy star" seal of approval.

She says that even though fluorescent bulbs contain mercury, using them contributes less mercury to the environment than using regular incandescent bulbs. That's because they use less electricity — and coal-fired power plants are the biggest source of mercury emissions in the air.

"The compact fluorescent light bulb is a product people can use to positively influence the environment to... prevent mercury emissions as well as greenhouse gas emissions. And it's something that we can do now — and it's extremely important that we do do it," Reed says. "And the positive message is, if you recycle them, if you dispose of them properly, then they're doing a world of good."

Reed says the agency has been urging stores that sell the bulbs to help recycle them.

"EPA is actively engaged with trying to find a solution that works for these retailers around recycling the product, because it's really, really important," Reed says.

But so far, she says the biggest sellers of the bulbs haven't stepped up to the plate.

"The only retailer that I know of that is recycling is IKEA," she says, referring to the Swedish-owned furniture chain store.

Reed says the EPA has been prodding other retailers, such as Wal-Mart, to do more.

"We are working with Wal-Mart on it, we are making some progress. But no commitments have been made on the part of Wal-Mart," she says.

Wal-Mart didn't respond to requests for a comment on the issue.

EPA also has asked retailers to sell the lower mercury compact bulbs that some manufacturers are making. Engineers say you can't cut mercury out completely.

Some other big companies have started paying attention to the recycling problem.

General Electric has been making compact fluorescents for 20 years. Now the company admits that the little bit of mercury in each bulbs could become a real problem if sales balloon as expected.

"Given what we anticipate to be the significant increase in the use of these products, we are now beginning to look at, and shortly we'll be discussing with legislators, possibly a national solution here," says Earl Jones, a senior counsel for General Electric.

In fact, Jones said he was having his first talks with congressional staffers on Thursday.

Why Use a CFL?

According to the federal government, if every American home replaced just one light bulb with an Energy Star approved compact fluorescent bulb (CFL), the United States would save enough energy to light more than 2.5 million homes for a year and prevent greenhouse gases equivalent to the emissions of nearly 800,000 cars.

Energy Star is a joint project with the Environmental Protection Agency and the Department of Energy that promotes energy efficient – and thus climate-friendly – products.

But not all CFLs are created equal. Here, some tips from Energy Star about what to look for and where to use a CFL:

-- Energy Star qualified CFLs use at least two-thirds less energy than standard incandescent bulbs and last up to 10 times longer (average lifespan of a CFL is five years).

-- CFLs save $30 or more in energy costs over each bulb's lifetime.

-- To get the most energy savings, replace bulbs where lights are on the most, such as the family and living rooms, kitchen, dining room and porch.

-- Install them in hard to reach fixtures, like ceiling fans.

-- Make sure the CFL matches the right fixture by reading any restrictions on the package. Some CFLs work with dimmers, others are specially made for recessed or enclosed fixtures.

-- CFLs have a harsh, cold light quality. Increasingly, this is less of an issue. Over the past few years, manufacturers have worked to provide a warmer color. Some people say they still notice a difference, but the gap is narrowing. For a warmer, white light, look for a color temperature of 2,700–3,000K on the package.

-- CFLs aren't for bathrooms. Not necessarily. CFLs can work in bathrooms, but humidity may shorten the bulb's life.