Accessibility links
Bassett and Vance Tell Their 'Love Story' Celebrity couple Angela Bassett and Courtney B. Vance have a new book out about relationships. It's titled Friends: A Love Story.

Angela Bassett and Courtney B. Vance read from 'Friends: A Love Story.' Also, listen an extended version of Farai Chideya's interview with the couple.

Celebrity couple Angela Bassett and Courtney B. Vance have a new book out about relationships. It's titled Friends: A Love Story.

The book tells the story of their emotional lives both before and after they met.

They talk with Farai Chideya about family and the relationship challenges they face as people and as actors. 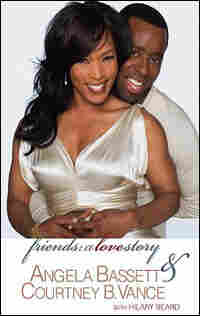 by Angela Bassett & Courtney B. Vance with Hilary Beard

It was a hot and sticky August day when I came into the world in 1958-at least, that's how I imagine it. Angela Evelyn Bassett is the name I was given-my middle name in honor of Aunt Evelyn.

But I've gotten ahead of myself. I need to start my story with my parents.

Mama didn't have the best luck when it came to men, but she always protected me from them. After she graduated from high school she migrated from St. Petersburg, Florida, to New York City, where she lived with her father's brother, Uncle Charles and his wife, Aunt Evelyn.

That's where she met my daddy, Daniel Benjamin Bassett, who'd moved to New York from Winston-Salem, North Carolina. They met, dated, got pregnant with me, married and lived in a small apartment in Harlem. I think it was on Seventh Avenue across from Small's Paradise.

My father was very bright, a self-educated kind of man-he could talk to anyone about anything. Yet I always thought of him as a jack-of-all-trades but a master of none. He made his money working in the neighborhood, fixing jukeboxes and other electrical things. My mother, Betty Jane, was a nurse's aide or something like that. I have a really pretty picture of her in her white uniform. With both of them working, they didn't have much-even before I was born. Times were hard for black folks in the late 1950s and early 1960s.

Ten months after I was born my mother got pregnant again. Of course, that only made things harder. I don't think my parents had considered how they would handle two babies, living in New York and both of them having to work. My mother never speaks poorly of my father, but sometimes she says he was frugal or stingy. According to her he was the kind of person where if she would say, "The baby needs shoes" and those shoes cost $4.72, he would count out $4.72-not $4.73-not a nickel more.

Maybe he was broke, I don't know. I'm certain times were tight.

On top of struggling financially, my parents' relationship was troubled.

My mother once told me a story of how she tried, or pretended to try, to leave my father in her trademark melodramatic style.

"We're leaving your daddy. We're leaving that man," she sang as she packed me into the car. His friends apparently reported to him, "They're in the car, and she's telling the baby she's leaving." He rushed home.

I also have a vague childhood memory of playing with a little white windup dog that flipped over and barked. I remember thinking the dog was fun. My mother was cooking greens. There was an argument about money-my daddy didn't want to give her money for food but he was eating the food-then a fight. A window got bumped then somehow my father's head was out the window. That's the only memory I have of being in that apartment. Maybe that was the kind of behavior my mother was trying to get us away from.

After Mom got pregnant with my sister D'nette, my parents shipped me down to Winston-Salem to stay with Daddy's sister Golden. Aunt Golden and her husband, Grover, didn't have any children of their own, but she was someone who loved children, and she was good with them-they were her background, her education, her love. And Uncle Grover didn't mind me coming to live with them. He was a barber and had his own barbershop, Sanitary Barbershop. Cutting heads was his thing.

I stayed with Aunt Golden and Uncle Grover in the little redbrick, two-bedroom house he had built on Graham Avenue near Winston-Salem Teachers' College, now Winston-Salem State University. The house had a porch with an aluminum glider on it and a magnolia tree in the front yard, a weeping willow in the back. I liked to play in the basement and was a good kid, from what they say. Aunt Golden and Uncle Grover had a committed and consistent relationship. They were good, God-fearing people who loved, supported and took care of each other. I never heard a harsh word said in their home.

My aunt Golden was a teacher, so she was gone during the day. While Auntie was at school I would stay with my grandmother, whose name was Brownie. Grandma Brownie lived in a little house across the street from the school. On Sundays I would go with either her or Auntie to Goler Metropolitan AME Zion Church. Auntie always dressed real fine and wore hats to church and all that stuff. She would dress me like a little doll baby in little frocks with gloves and little hats. As a small girl I was always repeating, "Praise the Lord!" and "Hallelujah!" which I heard at that church on Sundays.

Across the street from Aunt Golden and Uncle Grover, I had a girlfriend, Debra. I would play with her and her cousins, and we all went to church together. I probably heard Debra or my other little friends calling their mothers "Mommy"; I remember on several occasions attempting to call my auntie "Mommy" or "Mama." Now, I don't believe I ever tried to call Uncle Grover

"Daddy," but I did try to call Aunt Golden "Mommy."

"Angela, I am not your mother," she would tell me in a gentle voice.

"You have a mama. I am Auntie." I would get upset and twist up my face.

I wanted to have a mama.

One day when I was four I was in the basement playing when Auntie called me upstairs. "Angela, your mama's on the phone."

"Hi, Angela. This is Mama," said the voice on the other end of the line.

"I ain't got no mama," I shouted and threw down the phone. I remember feeling upset that the woman I lived with and loved was not my mother, yet here was this voice on the phone saying that she was my mother. It is the only telephone conversation I remember with my mother while I was living with Golden and Grover. I guess back in those days, people wrote letters, but I was too young to read.

The next thing I knew (I'm sure some days or weeks had passed), there was a knock on the door and a pretty, brown-skinned woman-my mother-was standing in the door frame. My mother looked nice, and I imagine my auntie told me at least a little something to expect-I don't remember it being traumatic. But the next thing you know, I was gone, headed to St.

Petersburg, Florida, with her and my little sister, D'nette. To hear my mother tell it, while she was living with my dad she had a couple of nervous breakdowns and ended up in court. The judge told her to take her children and go home or he'd take us or put us in foster care.

"I'm going home," she told him. "I'll go home." That's when she left my father; although they didn't divorce until years later.

In St. Pete's we stayed with my mother's parents, Grandmother Emma and Granddaddy Leroy, whom we called Mama and Daddy. My mother got a job as an aide in a hospital. My grandmother took care of me while Auntie was at work. We'd sit and watch soap operas together. She'd have her coffee and I'd have my mug filled with coffee, which was really milk with a teaspoon of coffee in it. When her stories were over I'd fill up her green-stamp book, putting all the little stamps in their places. That was fun! When I finished that we would walk up to the little store and get my grape snow cone. Then I'd get into her big bed and take my nap.

That was my day.

Excerpt with permission from the hardcover release Friends...A Love Story published by Kimani Press, a division of Harlequin Enterprises Limited. 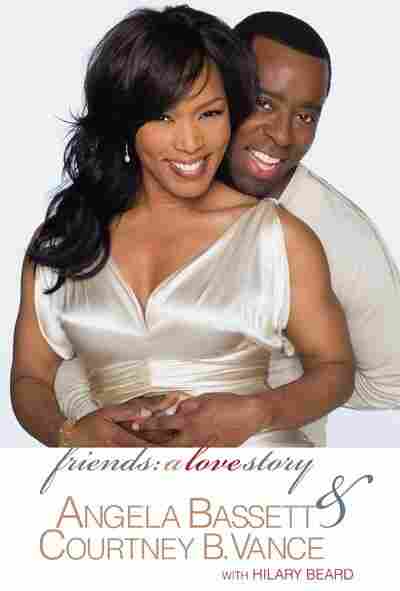 by Angela Bassett, Courtney B. Vance and Hilary Beard